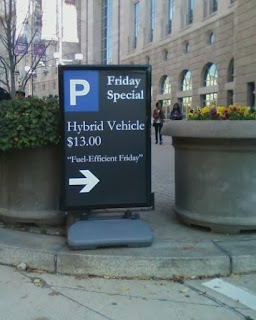 Such an arbitrary line has been drawn in the vehicular world, in the exclusive favouritism bestowed by the US administration's on electric and hybrid vehicles.

Let me be clear about this: I think hybrid and EV technologies are marvellous, and certainly bring us a large step closer to a reduced carbon footprint and reduced dependence on oil imports. But if you're really into an "all of the above" approach, it's time to broaden the scope of what constitutes a "green" car. Because EV and hybrid technologies have their limitations.

The REAL emissions of an EV.
While it's true that EVs have zero tailpipe emissions, they derive their electricity mostly from power plants that run on fossil fuels, that convert heat to electricity with an embarrassingly low efficiency. An EV running on coal-generated electricity can have a larger carbon footprint (per mile) than a frugal conventional car with an internal combustion engine (ICE) running on gasoline.

So unless your EV is powered by your solar array or windmill, you may not call it a zero emission vehicle.

Some hybrids are more equal than others.
Sure, a hybrid SUV will have higher MPG than a conventional ICE one. But all the hype surrounding them masks a pesky but crucial detail that many hybrid SUVs still have fuel efficiency that is significantly lower than those of high-efficiency gasoline (or diesel) powered cars. Think of the Cadillac Escalade hybrid, of which the fuel efficiency is distinctly underwhelming: 20 / 23 mpg (cty/hwy).

In the EPA's list of 2007 hybrid family sedans (see table below), the Toyota Prius takes pride of place: no surprise there. The Honda Civic Hybrid does nearly as well, but the other six cars in the list get less than 40 mpg. There are non-hybrid cars that do better than that.

For instance, the 2012 VW Passat TDI gets 43 mpg out of its turbodiesel engine, better than six out of eight hybrids from the EPA's list from 2007. It does that without the environmentally problematic manufacture of large batteries, and without the weather sensitivity.

In Germany you can buy Passats that do quite a bit better than 43 mpg. So it's not surprising that hybrids and EVs are much less popular in Europe than here in the US. Their energy labels on new cars indicate the per-kilometer carbon emissions: only that determines the sales and road taxes, quite independently of engine technology.

Six years on, better hybrids have reached American shores: the Passat is now bested by eight MY2013 family sedans and crossovers, up from two in 2007 - but there are still plenty of hybrids that do worse than 43 mpg.

I repeat: I've nothing against hybrids and EVs. If I lived in a climate that was kind to EVs, that is what my family would drive. But if you're serious about bringing down the total carbon footprint of the national fleet you can't afford to put all your green eggs in one basket. (Just the green eggs, no ham: ham has a huge carbon footprint).

Eventually, of course, we need to reconsider the way we move ourselves around. But for now we need to deal with our inherited infrastructure of sprawling suburbs, so we must stay open to whatever technology will help lower our total footprint, as much as possible and as quickly as possible.

A carbon tax would help immensely: a tax on fossil fuels would be directly proportional to the number of miles you drive, and inversely proportional to your car's MPG, just the right kind of incentive to drive the national MPG up fast, without the need for a tracking device in your car.

As far as perks like reduced parking fees or reduced highway tolls: It's easy to install a device that, when queried, will respond with the MPG of your car as evaluated by the EPA. The higher your MPG, the lower the tolls or parking fees levied: wouldn't that be a cool way to put in an incentive?