This post is part of a Blog Carnival on
Clean Air and Environmental Justice For All organised by momsrising.org

Now that the 2012 presidential elections are over, political ads are mercifully off the air and the topic of climate change is once again on the national table. There are renewed calls for action on curbing the emissions of carbon dioxide and other greenhouse gases.

This is no longer about "peak oil": there is actually plenty of fossil fuel left in the ground. But if we burn all that at the current rate, we'll fry the planet, and ourselves. The math on that is simple - and scary. A new World Bank report spells out the disasters we face if the planet warms by an average of 4 degrees Celsius, and calls for concerted effort to keep the warming below 2 degrees.

We can wait for our government to work itself out of gridlock - or we can be pro-active and do our bit. For no matter what a government can do to coordinate the reduction of carbon emissions, it will also require the active participation by individuals: you and me.

The good news: there is a lot of low-hanging fruit. The way we live is so wasteful that it's easy to make cuts in our carbon footprint without feeling much pain - simply by playing the energy efficiency card.

The wake-up news to all of us in the US: we are the low-hanging fruit. 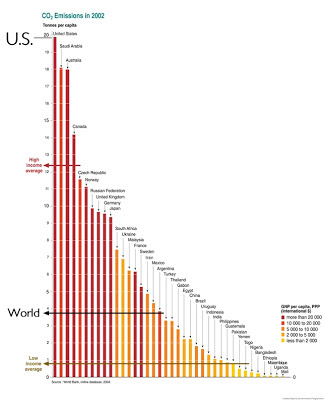 The average person in the United States is responsible for 20 metric tonnes of CO2 emissions every year, or five times the per-person world average (see graphic above). Since there are 300 million of us, our total carbon impact is way more than our fair share.

How do we get to such high levels of emissions? Let's take a look: The bar graph below is a summary of the sources of CO2 in a typical American household, from a paper by Jones and Kammen at UC Berkeley (Environ. Sci. Technol. 45, 4088 (2012)). This is the carbon emissions that we have in our individual control. 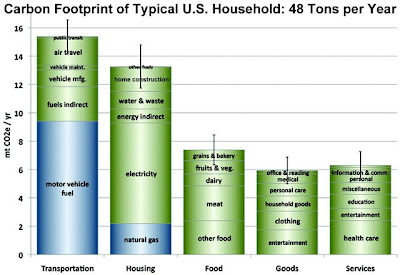 You can see in one glance where the largest contributions are to our carbon footprint. Of course, your individual footprint depends on your lifestyle, but this is a good starting place for exploring your carbon emissions "budget".

Many of us are already switching to compact fluorescent lightbulbs, using Energy-Star rated appliances, and doing many other things to reduce energy use. By all means count your carbs everywhere (your carbon emissions that is), and reduce your footprint everywhere in your life. But give priority to those areas of your lifestyle where you can slash your carbon emissions by a large amount.

The good news: Reducing our carbon footprint means serious long-term money savings: it's a win-win proposition that we should welcome in a protracted recession. I highlight the four largest household carbon sources, in order of increasing impact.

Buy less stuff.
"Reduce" comes before "Re-use" (and some would put "Refuse" before everything else). Ask yourself if you really need that 27th sweater, the 15th kitchen knife, the third car. Save a bundle by not buying new copies of things you already have.

Eat lower on the food chain.
Certainly: keep the lid on your pots and pans as you're cooking. But what you put in the pot has a much larger impact on your carbon footprint than how you cook it. For instance, no foodstuff generates more greenhouse gases during its production than beef. Even switching to chicken would make a big impact. We don't need to become raw-food vegans; but moving significantly toward a vegetarian diet by say, eating meat once a week, and eating as locally as possible, could take up to 8% off our carbon footprint. It lowers the grocery bills, and is also good for our health.

Move your thermostat closer to the temperature outside.
Home heating and cooling takes an astonishing amount of energy, especially since our homes are so large. Invest in technologies that enable keeping the inside temperature at 62-65F in the winter, 80-85F in the summer. It's easy to shave 10% of our total footprint by home energy conservation, and cuts the heating / cooling bills.

The new crop of itchless and washable woolwear is nothing short of a miracle; when my children were tiny the only way I could convince them to take their wool underwear off was to put in front of them a clean set waiting to be put on: they're that comfy. Down blankets give us a good night's sleep even if we turn the thermostat to 50F at night. For the warm months, our solar-powered attic fan keeps the house cool; it has paid for itself in the first summer by taking away the need to turn on our air conditioner.

Drive less, in a fuel-efficient car.
Our cars, our single largest source of CO2, account for 25% of our household carbon footprint. They are too large and overly powered: most have enough horsepower to get us along the highway at twice the interstate speed limit: not frugal, even if you don't count the speeding tickets.

There are many ways to get higher fuel efficiency in the car you drive now, and to decrease the miles you drive in it. But the largest impact comes from your next car purchasing decision.
We don't need to start driving in tiny plastic boxes (I really get the concern about safety). But a car with a smaller engine is less expensive to buy and less expensive to run. Let's be honest: we don't need an off-road vehicle or a muscle car for going to the grocery store.

Think about it: the 1950s NASCAR-winning Hudson Hornet had 145HP under the hood, a fraction of what's in most SUVs today. And the Hornet still attained speeds over 100 mph.

My family's current car, a 2012 Golf TDI (140HP, 2.0L turbodiesel), carries the four of us and the cello everywhere, at 38 mpg average. Our 8000 yearly miles implies 2.1 metric tonnes of CO2 emissions: Driving this car we emit 9 metric tonnes of CO2 less than the national average, saving 20% off the typical household carbon footprint. I call that a good cut in our household's carbon budget.

Even so, I don't intend to drive this car at its 125 mph top speed, nor do I plan to red-line it to get all the torque out of it and play the jackrabbit. This means that 2.0L is way too much for my car. We only bought it because Volkswagen doesn't sell the 1.6L Bluemotion Golf in the United States. The one that does 50 mpg.

A gas-frugal car offers perks, other than the savings at the pump: With normal use, I visit the gas station once a month. So I'm in a good position to weather fuel shortages like the one leading to long lines when superstorm Sandy hit the East Coast, or when refineries or pipelines go offline as they did in California earlier this year.

The good news: the choice of gas sippers is getting broader even in the US, as carmakers are adjusting their offerings to comply with tightened CAFE emissions standards for new cars. Even though generally they still reserve their best and most advanced gas sippers for the European market.

Systemic change
Finally: even if you trimmed down your personal carbon footprint to Sub-Saharan levels, a US resident still retains a large systemic carbon footprint. An MIT study has found that a homeless person in the US (no home, no car, extremely few possessions) has a carbon footprint of 8.5 tonnes CO2 per year, more than twice the planetary average. This comes from public services such as roads, education and defense, items that are not included in the bar graph above from the Berkeley study, which covers private household carbon emissions. The US military, which is as big as the next ten largest national defense departments combined, consumes unbelievable amounts of energy.

These are things that require systemic re-thinking to reduce their carbon footprint, for which we are all, collectively, responsible.

Perhaps that is a good reason to add a few Rs, and emphasize the ones that occur at the head of the list. As for recycling, so much of it is bunk that it should be used only as a last resort:

You may also like:
1. Why the new CAFE standard is just my cup of tea
2. The Power of Names
3. For Earth Day, pledge to turn off your TV
4. How to buy a gas sipper for less
5. The Carbon Footprint of a Car