#SchoolStrike4Climate: Why I've been quietly crying

As is the way with worldwide events, New Zealand and Australia took the lead on the School Strike for Climate. Young people skipped class and took to the streets by the tens of thousands. I watched them from fourteen time zones away.


They came out in mountains, by rivers and in cities.

#HappeningNow: Students from the Apu Palamguwan Cultural Education Center join the Global #SchoolStrike4Climate. They started the 12-km, mountain-terrain walk from Bendum at 6am and are on their way to Zamboangita. pic.twitter.com/BRNQm6odFX

They walked in sunshine and steady rain, in grassy fields and by stately cathedrals

What do YOU see in the Green New Deal?

Generally, we find it hard to talk about climate: it's like talking about cancer. It puts a damper on parties and convivial meals. So we tend to avoid the topic.

Two developments in late 2018 have changed that, completely.

This means that if you approach a total stranger, they are more likely to be worried about climate than not. Exactly how likely you are to find a like-minded person depends on where you live. But the fact remains that there has been a shift in sentiment from "it's a hoax" and "who cares", more toward "yes, I'm worried".

But what has really put climate change on the national discussion table is the emergence of the Green New Deal. Championed by the Sunrise Movement, young people who don't take no for an answer and lobby their elected representatives hard, it has earned the support of the charismatic young representative from Brooklyn, Alexandria Ocasio-Cortez.

In a way, the American right has fallen into the Trump trap. In the same way that the left, outraged by the lies in the president's tweets, are complicit in keeping those lies circulating, so now the right keep AOC and her progressive ideas in the news by compulsively trying to take down both her and her proposals.

Of course, the entire American punditry on the left is also jumping into the discussion, and suddenly everyone is talking about climate action.

But not everyone gets the Green New Deal right.

Read more »
Posted by CelloMom at 9:14 AM No comments:

The biggest advantage, and the biggest disadvantage, of being an independent blogger is that you call your own time. This means that when life offline demands your attention, the blog goes by the wayside. That is what happened for the past year or two.

Now that I'm back, I'm going to write more about climate solutions, and maybe more outside the box with four wheels on it.

Not that I will stop writing about cars altogether. After all, a new and exciting wave of electric vehicles are just over the horizon, and, now that my kids have learned to drive with a stick, eventually we will need a replacement for that diesel Golf that we are driving now, so I'll be looking into those EVs. 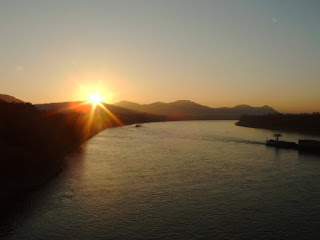 There will be no more posts on diesel cars. Europe made a pact with the diesel devil: they were going to put up with the particulate matter pollution for their population, in exchange for the very high efficiency that diesel offers, and a way to cut carbon emissions. Well, the diesel devil did what devils usually do when you make a pact with them, and after dieselgate one European country after another is now pledging to phase out the sale of all internal combustion engine cars, and to transition to electric ones. Who am I to buck that trend?

The sun rises on the EV.

You may also like:
1. Can you trust MPG specs?
2. How to buy a gas sipper for less
3. How much horsepower do you need?