We humans have a fine nose for fairness, or lack thereof. Even before they learn about fractions in school, children can tell whether or not a pie is equitably divided. So if you're trying to propose a plan that makes things less equitable, you'd better have a convincing story.

Reagan's "A rising tide lifts all boats" was one of those stories. The 1980s rang in an era of rising inequality not seen since the Roaring Twenties.

This is true globally as well: the global version of Reagan's story was that globalisation would lift all boats, including those in developed countries. It did work out that way, but only for selected countries, like South Korea. In general, globalisation has caused the playing field for the accumulators to expand, so that now a handful of people - 26, to be precise - owns literally half the wealth in the world.

What did the rest of the world get out of it?

Read more »
Posted by CelloMom at 9:46 AM No comments:

The skyscraper was the twentieth-century symbol of power and success, forming the highrise jungle of successful cities like New York, and copied in Hong Kong, Sao Paulo, Dubai, Kuala Lumpur, Beijing, and a long list of cities arriving into the fast growing global club of movers and shakers.

Most modern skyscrapers are of the steel-and-glass construction pioneered by the architect Mies van der Rohe. Here's one example: the building that houses the Department of Electronic Engineering, Mathematics and Computer Sciences at the University of Delft. 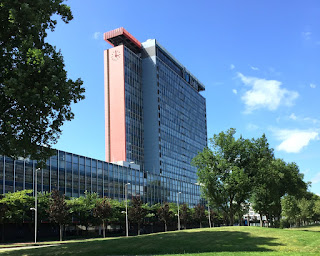 Its still a handsome building to look at. But its windows, facing east and west, catch the sun very efficiently and turn the place into a giant greenhouse. A very long time ago, as a physics freshman, I used to take an introductory electronics lab on some high floor on afternoons, but nobody ever enjoyed the view as the teaching assistants always kept the shades down and closed as tightly as possible. Even so, I sweated over those labs, and not just because I wasn't all that good at electronics.

As it was a fall course I never did find out how the building did in winter, but since it was constructed before double-pane windows were a thing, my guess is it could get pretty cold on the side that was not in the sun, which was at least half the place.

What I'm getting at is that climate control in this type of building is an energetic nightmare, even in the kind of temperate climate Mies van der Rohe hailed from. I shudder to think of the carbon footprint required to keep highrise livable in places that get cold, like Toronto, or that get super hot, like Dubai.

Yet here is New York, a place that gets both cold winters and hot summers, whose climate action plan calls for its buildings to cut their carbon footprint by 40 percent by 2030, which is only a decade away. On the other side of the continent, Vancouver's glass towers are said to undercut the cities nice climate action plan.

Read more »
Posted by CelloMom at 4:41 AM No comments:

Holiday Travel in the Age of Climate Change

When I was growing up, come the summer holidays my parents would pile our stuff in the VW van that my dad had converted into a camper, and drive around Europe for four to six weeks. They always took care not to leave on the vacation rush: that weekend when half the Netherlands seemed to start their holidays, and highways to sunnier destinations could be congested for literally hundreds of miles.

In fact, "Black Saturday" is still a thing. It's on today for France, where there is a warning out not to travel unless you really have to, especially on the roads around popular destinations like Bordeaux. There's a total of 800 km (500 miles) of stuck traffic on French highways.

These days, vacation travel is hard for other reasons as well. A few years ago, we had to cancel a trip due to heat: I had been watching the weather forecast at our destination, and each day in the week before our departure the predicted temperature kept rising. The night before we were to get on the train, the forecast called for 38C (100F) temperatures.

Reader, we cancelled the entire trip.

We were lucky that our reservations were refundable (except the first leg of the train, as we made the decision within 24 hours of departure). Since then, we've made sure that our holiday reservations are of the cancellable type, even if doing that costs more.

This summer, that really worked out. Temperatures were coming down after two heatwaves that hit western Europe hard. Things were looking good. But then, a few days before our departure there was an intense, record-breaking heatwave. We took my aunt to cool off at Ikea, and started watching the weather and the travel advisories.

Rail operators started to report trouble on the lines: there were disruptions in the electricity supply or mechanical issues. Thalys, the high-speed operator, was briefly even forced to close ticketing. 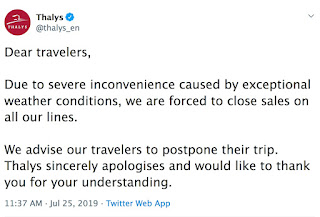 This is travel in the era of the climate crisis: you need to monitor whether you can actually make that trip. We cancelled our hotel reservation. We discussed flying, but only briefly. My family knows I'm, putting it mildly, not in favour of short haul flights. Anyway, flights were being disrupted by thunderstorms at our destinations, so that was that.

In the end, on the morning of our departure we made a decision to take a chance, and we did make it without delays and without getting trapped in a hot train car. We made hotel reservations from the train (yay for WiFi on the rails!) Then we had a good time exploring, using the local public transport cards. We haven't had a car vacation in years, and don't miss sitting in the kind of holiday traffic that's out there today.

You may also like:
1. Why I Love High-Speed Trains
2. My Big Fat Dutch Wedding
3. How Will You Travel for Thanksgiving?

Posted by CelloMom at 3:51 AM No comments: