It was in Europe that the party first began for the Ford Fiesta, back in the 1970s. Joyous, feisty, and nimble, it became very popular the world over, except perhaps in the USA, where it was pulled from the market in the 1980s, not to return until 2010.

It seems we've missed quite a party. But the good news is that the party, for this car, is far from over.

In Britain, where the Fiesta has been one of the best selling cars for decades now, it is available in a riot of colours (twelve in total), and a large palette of engines as well (currently nine different ones, see table below).

The Ford Fiesta is available in sedan and hatchback versions all over the world (except in India where only the sedan is for sale), but the frontal aspect changes for each location the way fashions and foods have their local flavour. Someone could probably write a dissertation in anthropology on the ways the Fiesta goes dressed around the world. In this post I highlight just the frontal aspect and the engine under the hood; I'm sure there is a lot more to be said about the differences in the Fiesta's interior from one continent to another.

Read more »
Posted by CelloMom at 5:43 PM No comments:

Good news for those who need to seat three children on the back seat of a car: you don't have to buy a minivan. Nor do you have to wait till carmakers finally see fit to sell the seven-seat gas sippers in the US that they've been offering elsewhere already. Nor do you have to go to radical solutions like the integrated three-child seat offered by Multimac. 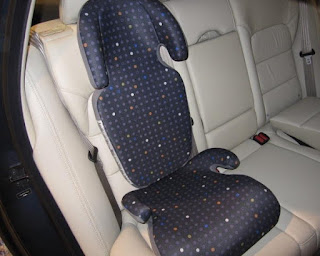 You have to look pretty hard, but you can buy narrow child seats that would fit three in a row, even in the back of a smaller car. One example is the Volvo Booster Cushion. It comes with a detachable back rest that can be adjusted to several angles for comfort. You don't have to drive a Volvo to use this seat, it fits in any car outfitted with a three-point seat belt.

The seat width is 15 inches.

My 2012 VW Golf, not a particularly wide car, has a bench-type back seat (the seat has a continuous, flat, unsculpted surface) with a total width of 52" between the arm rests on the doors. Three of these Volvo booster seats would take up a total of 45", meaning there is space left between them to get to the seat belt receptacles.

Are they safe? What can I say: Don't the Swedes love their children too? But if you're looking for an official rating, this seat gets high marks from the Insurance Institute for Highway Safety.

The retail price is around $200. Sounds steep for a booster seat - then again, it beats having to buy a new car to accommodate your third baby. It's best to avoid putting a new baby in a new car, anyway.

(NOTE: If you have young children, try to shop for a car with a flat-surface back bench, which offers flexibility in the positioning of multiple car seats).

You may also like:
1. A Non-Toxic Cleaning for your Car Interior
2. So you want a seven-seat car that does better than 30 mpg

Christmas Outside the Box

Our extended family have known for years not to send us anything for Christmas - in this we're ahead of Greg Hanscom, who recently wrote an article called "Married father of two seeks Best Christmas Ever. No presents allowed." That piece has become the cornerstone of Grist's December theme, Shift the Gift: de-materialising the holidays.

This is seriously Outside-the-Box stuff. After all, Grist endorses it. Truthfully, I rather doubt Shift the Gift will become a meme overnight: we all suffer the dread of being labeled a Grinch. But while I may be well outside the box on this, I don't think I'm out in left field.

Read more »
Posted by CelloMom at 8:15 AM No comments:

The first time I consciously took in a Lexus RX, in the early noughties, I had an overwhelming impression of a crossover between a pregnant Honda Civic and Marty Feldman playing Igor in Young Frankenstein (1974): remember that? "Hump?! What hump?"

From the side, I was reminded of the lines of a Civic sedan at the top, but there was way too much at the bottom, giving that pregnant look. And then there was a hump stuck on the back, which made the RX one awkward looking SUV.

But the hump gave plenty of stowing space in the back, the safety rating was high, and the interior was very, very comfortable, true to its original moniker SLV, for Sport Luxury Vehicle. The Lexus RX became very popular with well-to-do moms who enjoyed the luxurious ride to their children's various sports activities.

Read more »
Posted by CelloMom at 6:47 AM No comments:

The Foxification of the US

"Get me to a bathroom, quick, or I'll pee in my pants laughing!" This was my less-than-dignified reaction when I first read the news that the Ford Fusion has been named the "Green Car of the Year 2013". Never say I never tell you the way it is.

The Fusion is nearly as long, and nearly as heavy, as a typical minivan. Its 1.6L EcoBoost version "achieves" "up to" 37 mpg - on the highway, that is. Its average fuel efficiency is 28-29 mpg. I wouldn't call that an achievement.

A bit of perspective: the 2012 Ford Mondeo, the European version of the Fusion, gets 41 mpg average from it's 1.6L Duratorq engine, as reported by British drivers who on the whole have rather more vigorous driving habits than Americans. Ford.co.uk quoted its fuel efficiency as 55mpg, but everybody knows that European fuel economy numbers overstate the actual efficiency. Ford has pulled that engine and now offers the Mondeo with the 1.6L ECOnetic engine, also quoted at 55 mpg(US) or 66 mpg(imperial).

The "basic" US Fusion with the 2.5L Duratec engine that gets 26 mpg average? Not even for sale in Europe. In the UK, the largest engine you can buy with a Fusion is the 2.0L Duratec gasoline engine (quoted at 30mpg).

The Fusion Hybrid does get 47mpg, respectable mileage for a car this size. It's also $6,000 more expensive than the base model. But the award explicitly covers all Fusions, not only the hybrid.

Eventually, I stopped laughing and started to read around. There's the recall news on Ford's Fusion and Escape models as the EcoBoost engine tends to overheat and is a fire hazard. Embarrassing.

But my mood turned grimmer as I started finding, all over all the car-related news outlets and blogs: "Ford Fusion gets Green Car of the Year Award". That's it. An endless repeat of the mileage figures, maybe a few other details, and invariably accompanied by a photo, taken from a low angle to emphasize its "aggressive" front, since that seems to be so attractive.

The popular photo angle brings to mind the perspective of a three-year old, about to be run over by this beast. Ummm: this is attractive?

So, the Green Car of the Year award goes to a car that does less than 30 mpg, well on the guzzly side of the 40mpg average of cars sold in Europe this year, and US news outlets report that without further questioning. Even the New York Times, usually open-eyed, has no comment.

Kind of reminds me of the episode now known as "Karl Rove's melt-down" on Fox News on the evening of the 2012 presidential elections when, in front of an audience of millions, Karl Rove questioned the election results in the face of Fox News' own team of election analysts' calling Ohio for Obama.

A number of democrat-leaning news outlets and wonks had field day reflecting on how much Fox News is out of touch with reality in general, and with the reality of the 2012 elections in particular.

Given the election results you can be smug about Fox News' disconnect. But let's be clear: On the subject of cars, the entire US press has been Foxified.

There is a near-complete disconnect with the view from the rest of the planet: that Americans drive over-sized and over-powered gas guzzling automobiles - what comedian Sean Lock calls "bungalows with windshields". If you can report, with a straight face, that a car getting 29mpg gets the Green Car of the Year Award, you're out of touch with the planetary reality.

No wonder US negotiators are having such a hard time at Doha this week, or anywhere the need for curbing carbon dioxide emissions is discussed. When it comes to real and significant action on climate change, the US as a whole is still in deep denial.

Either the US press honestly don't see the elephant in the room and have selective myopia like their audience - after all, US journalists are Americans - or they don't have the guts to break the news.

It is not bold to only be saying things like, "Climate change is happening now", and leave it at that. We need a better effort.

We need the popular press to say it explicitly, loud and clear, and keep at it until we all hear it: That American households urgently need to make deep cuts in our carbon emissions, and that our cars contribute significantly to those emissions. That one possible way to go is to install a carbon tax that will make everything we buy twice as expensive as it is now.

Earth to the fourth estate: Are you there?

Posted by CelloMom at 9:50 AM No comments: