You have to bite the bullet sometime. In the end, you take a deep breath, and you sign on the dotted line. And so it was that CelloMom stopped vacillating and brought home a 2012 VW Golf TDI, the one with the 2.0L diesel engine that I sneered at last summer for doing only 42 mpg on the highway. You have to work with what you can get.

We traded in our 2001 Golf with the 2.0L gasoline engine, much to CelloPlayer's dismay and disgruntlement. CelloPlayer was so attached to that old Golf, and was determined to hate the new one - until one cold morning when I turned on the seat heat; after that there was a palpable thaw in the formerly frosty relation. Here is one car that really hasn't grown much over the decade: barely two inches in all three directions (the 2001 Golf was an Mk4 version, the current 2012 Golf is an Mk6). Overall, it's much like stepping into the same car.

On the outside, the lines of the Mk6 are not as clean as I would prefer: there are a few folds and ridges all around the exterior that I think are quite unnecessary. And it's got that silly overhang at the top of the hatch: as far as I can tell it only serves to catch dust, and to shield that dust from the rain that might have washed it away. The front presents a much less friendly aspect, more aggressive, more angular. Too bad. I always liked Volkswagens for their rounded features. Still, it's a Golf, and its styling is still distinctive. 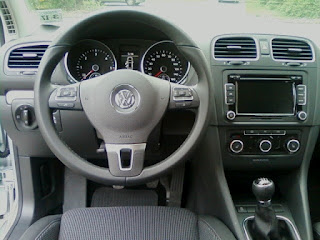 The dashboard is mostly black (plastic) with brushed-metallic rims and highlights around the various instruments. At least it's not a shiny chrome. It's a bit overdone for a Golf, I would have preferred it all black, maybe with anodised aluminum if you must have metal rims. The instruments light up white with red highlights, easy on the eye when it's dark out.

Of course, I got the rubber floor mats. Not for the sake of the flashy TDI logo, but because they're chemically cleaner than the plastic carpet mats. So far, the new car smell hasn't been overwhelming - but we've been keeping the windows well open, cold weather or not.

Seats are firm: cue the heavenly choir! I have always thought that over-stuffing the seats was a bad idea: after all, these are car seats, not your grandma's recliner. In a too-soft seat you start to get itchy after an hour and a half, and a six-hour drive is an exhausting experience. Now they have finally outfitted this car with seats so firm that they are comfortable, and remain so even at the end of a six hour drive.

To go with the firmed-up seats, the upholstery is spartan by US standards, and also much more on the European mold: more stark, less pluche. Translation: much easier to keep clean. It will also be much friendlier on your skin in sticky weather. CelloDad, who hates the feel of velour on his skin in any weather, is very happy about this.

He would have plunked down the extra cost for leather seats, but unfortunately, you can't get those in Golfs sold in the US. And while we're on the subject of out-of-reach options, if we lived in Germany we would have gone far away from the boring colours, and would likely have ordered a Golf with a dark-plum exterior, the one called "Dark Violett Perleffekt". Oh, and the 1.6L BlueMotion diesel engine (50mpg). Oh well.

Anyway, in the US Golf TDI, the front seats are of the "sport" type, and have adjustable lumbar support that is very useful on long trips, and generally help short people like me reach the pedals. And there is the seat heat.

The back seats have that legendary Golf leg space that make it comfortable for even my brother in law, who is 6'8" tall. Fitting baby and child seats have never been a problem for us. And the back seat is shaped like a bench: that is, the two outer seats are not molded. So it's a great flat place to lay down a cello across the three seats. Also good for a, er, nap. 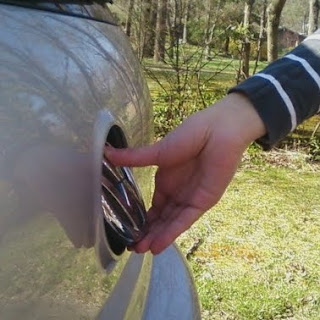 Open the trunk by flipping up the VW logo: my children were especially enamoured of this feature. 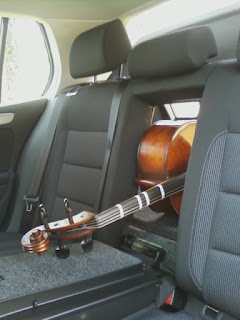 The 3/4 cello still fits diagonally in the trunk. But in this Golf you can fold down the back of just the middle seat, and position the cello so that its neck protrudes onto the back seat. This will be the way to go once we grow into a full sized cello and we have a few friends coming in the car with us. (And no: I wouldn't dream of actually moving a naked, case-less cello, but it does make for a cute picture).

If you fold down the front half only of that flap, it turns into an arm rest complete with two cup holders. The arm rest is wide enough for one of the occupants of the back seat to do their homework on it, if necessary.

Ignition is instant: there is no wait time for the engine block to heat: this is really not your dad's Mack truck. The diesel engine idles with a pleasing and extremely discreet throbbing; you won't wake up the neighbourhood by starting this baby. You don't smell anything either: true to its "clean" diesel designation.

For the rest it also behaves like any other internal combustion engine. For instance, you don't have to worry about emptying the fuel tank. In an older diesel engine, if you empty the tank completely, you needed to get the car towed to a garage that can prime the engine before it can be restarted. Fuel injection put an end to all that trouble. 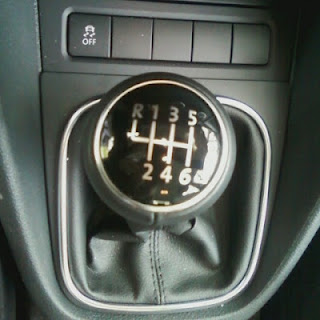 True to the custom in the VW family, the shift stick moves as if in butter. I don't know what they have in that gear box, but it is possible to shift through all six gears using just your index finger (reverse requires a bit more). The best part: it stays that way for years. Come to think of it, the gear box in our 11-year old Golf was only marginally less smooth. It's the kind of thing that puts a grin on my face: very big, very satisfied, very geeky.

Also true to the custom in the VW family, the power steering comes on strong at standstill and at low speeds, where you need it, but discreetly tucks itself out of the way as soon as the wheels are at a comfortable roll, so you don't have that awful drive-by-wire feel, especially disconcerting when you're going 65mph on the highway.

This car is a pleasure to drive. The 140hp (or rather, the 236 lbs/ft torque) gives it enough zip, even carrying four people plus luggage, and even going uphill. We took a road trip over spring break, clocking most of the miles on highways; the overall fuel efficiency was 45mpg, better than the EPA highway spec of 42mpg. So overnight, we more than doubled our fuel economy from the embarrassing 20mpg of our 2001 Golf.

Since the fuel tank contains 14.5 gallons, you can go 600 miles on a full tank. This makes CelloDad, who is prone to range anxiety, insanely happy.

And so we park. We get out and - oops, forgot to close a window. Here is a design flaw: the car key is now fully electronic. No more keyhole in the door handle that used to bail you out and allow you to close all the windows by inserting the key and turning it clockwise. This makes the "valet" key quite useless as you can't use it to lock the car. It also means that if you decide to launder your key you need to bring it to the dealer to be revived. I once laundered my car key by forgetting to fish it out of my pocket before throwing the jeans into the washing machine. The key came out quite clean, and not quite useless, since I could still get into the car by just sticking it into the door the old-fashioned way. That option has now been taken away: that's progress for you. But not, in my opinion, in the right direction.

Is the extra cost worth it?
This is actually not straightforward to answer. The basic 4-door diesel is about $5000 more expensive than the basic 4-door Golf with the 2.5L gasoline engine. But several upgrades come with the diesel version, including 17" alloy wheels, built-in Bluetooth, expanded media, and that seat heat, all of which I estimate to account for about $2000 of the price difference, by peeking at the options price list on the German site for the Golf. (I have a lot more to say about options packaging, but that's for another post).

So my guesstimate is that the diesel engine itself counts for about $3000 of the price difference.

If you drive more than my family do, the breakeven point shifts to lower price: to $2.50 per gallon if you plan to drive the car for 160,000 miles, so it already makes sense at today's prices to go for the diesel rather than the gasoline Golf.

I was very happy when I brought this car home. And I'm even happier now, after having swapped the 17" wheels that come standard with the Golf TDI for a set of 15" wheels, even though at first sight that seems like a downgrade. But that's a story for another post.

In Europe, the Golf is a respectable family car. In the US, it seems to be marketed mostly to first-car owners: young, just out of school, just got a first job. So now we sit back and wait for the follow-up promotional material to fall into our mailbox: all the stuff that's directed at people about 20-25 years younger than we. Not a child seat in sight. It will be all about snowboard racks and such. It's like getting an age reduction package in the mail. I love it.