Why hesitate? Without a doubt, Volkswagen AG more than deserves CelloMom's Turkey award this year, for installing devious software in huge numbers of its cars to pretend that they pass the NOx emissions limits while really they don't in real-life, on-the-road use. In the US, VW owners are now offered $1000 to bring in their - our - NOx spewing machines into the dealer for the fix. Of that, $500 is in cash, and $500 is in credit for parts of work done by the dealerships.

The toxic cloud around the issue is still spreading, eveloping an ever growing number of cars, brand and locations, and casting a finally crticial public eye also on the inadequacies of the European test cycle in general, and especially where it overstates fuel efficiency, in some cases up to an egregious 40%. This last bit has been a public secret for quite some time, but now people are calling it out for what it is: scandalous.

Adding to the smog, Volkswagen has denied that its sales have been negatively affected by the "Dieselgate" scandal. But who is going to believe them now?

Posted by CelloMom at 7:08 AM No comments:

You know that photo of a parking lot where the rows and rows of cars are covered with a canopy of solar cells? "Share and Like if you think every parking lot should look like this!".

Umm no. I've always argued that the ideal parking lot, say, for a mall, should have several dozen parking spots close to the entrances, all for handicapped parking. Plus a bus stop.

As a sign that I've been living in small-town America for a long time, I had forgotten to advocate for bicycle parking. So here is my bit on that conversation: Share and Like if you think every parking lot should look like THIS: 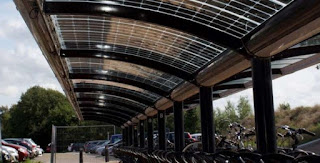 This is a typical bike lot in the Netherlands. It can accomodate a dozen bikes in the space ordinarily taken up by a single car. A roof protects the bikes against frequent Dutch rains.

But this one has a novel catch: solar panels on the pleasingly curved surface. These are architectural thin-film solar cells that are bendable: so you don't need a flat surface to mount them on; they can be applied to buildings with visually interesting curved surfaces. Think of what an archtect like Zaha Hadid could do with that!

You may also like:
1. EV Unplugged: the TRULY zero emission electric car
2. Solar Energy From a Road Surface is Now a Reality
3. How to Slash Transportation Emissions

Imagine that, sixty-five million years ago, a comet did not hit the earth, and kick up a dust cloud. Nuclear-winter-like conditions did not follow. The planet remained balmy, and dinosaurs prospered. Further, imagine that even though dinosaurs roamed the earth, there was still enough biological space for mammals to develop, finally producing homo sapiens sapiens with all our ingenuity, our agriculture, our technology, and our addiction to such things as "Call of Duty" and "Candy Crush Saga".

Now suppose that there has been genetic cross-talk, and evolution, and that the dinosaurs that survive after all that time have taken on the shape of businesses. Some are small, some are large; some are behemoths. Some of the most successful ones do trade in those things that are even older than dinosaurs, fossilised carbon in all its forms: coal, oil and natural gas.

This carbon was largely deposited around 300 million years ago, in a geological era called, fittingly, the Carboniferous. So those carbon deposits were already ancient when dinosaurs came on the scene, 230 million years ago. The burning of that carbon yields the carbon dioxide that is now de-stabilising our planet's atmosphere.


Here's the thing about dinosaurs: They have - by definition - a reptile brain. This brain governs the quests for food and for mates. It is associated with such behaviours as aggression, dominance, and defense of territory. These properties are all manifest in the behaviour of today's dinosaurs surrounding their digging up, refining and selling of carbon-based fossil fuels, which they call business.

Think also of the Gary Larson cartoon of the crocodile in the witness box saying, "Well of course I did it in cold blood, you idiot! ... I'm a reptile!"

Read more »
Posted by CelloMom at 8:55 AM No comments: