European drivers of VW diesel cars are, if anything, even more frustrated than their American counterparts. This is partly because VW is a fixture on European streets: world's largerst car manufacturers makes most of its cars for Europe. It has long been a popular brand known for making sensible and affordable cars, and people (like me!) have a soft spot for its iconic models like the beetle and the campervan.

So when my brother in law in Holland forwarded me a Q&A page on VW diesels, I glommed onto it the way I studied for my driver's test (yes, it's in Dutch; but Google translate does a decent job of turning it into other languages). The page is on the website of ANWB, the Dutch automobile association (even though it's still called a cyclists' association for historic reasons).

Photo by Art of Nature and Life

The questions sent in by its members are very much like those asked by American diesel owners: What will the fix do to my fuel efficiency? The horsepower and torque? The resale value of my car? Should I sue VW? Will I need to pay extra emissions tax on the car purchase retroactively? (the answer is no: the Dutch government intends to make VW responsible for those damages).

And the one big question: WHEN will my car get the fix?

This is really the largest source of frustration, since VW has so far not come forward with a time schedule, or indeed a comprehensive plan, for cleaning up its mess. I'm imagining its engineers are working round the clock to come up with a solution that will simultaneously satisfy the EU emissions standards, the customer's love of the peppy driving style, the various realities of the engineering (a retro-fit is almost always way harder than doing it right the first time) - and the cost. And they'd better get it right in one go, or VW reputation, which is already in the gutter, will get flushed off the streets by a further wave of negative sentiment.

Just a few days ago, VW has announced that in Europe it will recall affected models with a 2.0L diesel engine, to install a software patch that will bring down the NOx emissions to within the European limits. The software patch is expected to be ready by the end of 2015, and get installed in early 2016.

This is only for models with a 2.0L diesel engine; the ones with a 1.6L or a 1.2L diesel engine will need a hardware fix, which will not come until September 2016. If you didn't know that there were such engines in VW cars, it may be because you live in the US where VW doesn't sell them. They are significanly less expensive, both to buy and to run, than the version with the 2.0L engine. In Europe alone there are 3.6 million cars with VW's 1.6L diesel engine.

US owners of VW diesels will have to wait longer as well. The software patch is not going to be enough to get the NOx emissions below the stricter US standards set by the EPA. Note to those who want to see the EPA defunded and crippled: we need this agency to be the watchdog of our air, water and general environment; it has saved countless lives since President Nixon called it into being in 1970.

As one example of the EPA's efficacy, here is a graph of limits on car emissions that have direct bearing on lung health. The graph has two parts: it shows European emissions limits on the left, and American ones on the right, both appropriate to the diesel cars of the VW scandal. 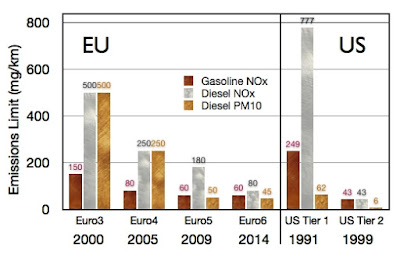 Some emissions limits on car exhaust have been in place in the US since the early 1960s. But those were the bad old days when the word "pollution" was yet to make its way into common use. People littered the streets. People thought it normal that a smokestack emits a billowing black cloud containing soot and toxic gases. Why, people smoked, voluntarily inhaling toxic fumes; cars' ashtrays actually contained cigarette ash, not change for the parking meter or beeswax to keep your kids' hands busy on long trips.

In 1991, the EPA put stricter limits on car exhaust in a schedule called Tier 1. For cars falling in the "Tier 1, bin 5" category, such as these passenger diesel cars, The emissions limits for NOx was 400 mg/mile for gasoline cars and 1250 mg/mile for diesel cars. In addition, there was a 100 mg/mile limit on "PM10" pollution, which means particulate matter smaller than 10 micrometers (about a fifth the width of a human hair).

The numbers in the graph are smaller because I've done the translation from mg/mile to mg/km so they can be compared with the European numbers.

In 1999, the EPA sharply curtailed cars' particulate-matter emissions in the Tier 2 schedule by limiting NOx emissions to 70 mg/mile for both gasoline and diesel cars, and PM10 pollution to 10mg/mile. These mandates, together with the fact that US diesel fuel has the lowest sulphur content in the world, makes for the strictest limits for particulate pollution. Thank you, EPA!

In contrast, the European emissions schedule is much more lax, its evolution toward lower emissionis limits running behind that of the EPA by more than 15 years. The Euro3 standards for passenger cars, adopted in 2000, were only a little better than the EPA standards of 1991. Even the new Euro6 schedule, adopted in late 2014, is not as good as the EPA's Tier 2 which was adopted back in 1999.

Most of the diesel cars of the VW scandal fall in the Euro5 schedule.

Not only is the overall emissions in Euro5 higher than in US Tier 2, a higher emissions allowance is given to diesel cars than to gasoline cars. A large part of this is the engineering reality that diesel engines emit more particulate pollution than gasoline ones.

But it also reflects the European drive to lower carbon emissions ever after the Kyoto climate treaty, which they did sign. Europe put itself squarely behind the diesel car because they're up to 30% more fuel efficient than diesel cars and give that much less CO2 emissions. They subsidized diesel fuel to encourage the sales of diesel cars.

Of course EU officials were aware that diesels give more particulate pollution than gasoline engines; the difference in NOx limits reflects that. The trade-off is between health risks to your own population, and climate risks to the global population. In that respect, I think they went for the honourable alternative. It's in the same vein as smoking being your personal decision, while second-hand smoke for your kids is not cool.

It's also a fact that the US fuel efficiency schedule trails the European one by about a decade. Which is too bad because the average American drives a lot more than the average European.

There are now reports that the EU authorities have long known about cars exceeding the emissions limits in real-life driving conditions; it's not clear whether they allowed this because of pressure from the car manufacturers or because of the relentless drive to lower the carbon emissions. 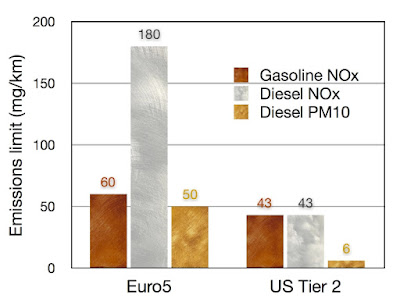 You can argue about the "fairness" of this, but the EPA does not distinguish between gasoline and diesel cars. Unlike the EU, the US is not a signatory to the Kyoto treaty, too many of its politicians still deny that global warming is happening, and while the CAFE rules require the national fleet to become more fuel efficient, the nation is not yet divorced from its SUVs with V6 engines and all-wheel drive - otherwise known as gas guzzlers. Frugal diesel engines make up a tiny fraction of cars on US roads, so there are no separate rules for them.

Personally, I would love to get the software patch while they're working on the hardware fix. That will get my car below the European NOx limit of 180 mg/km. That's still more than 4 times the EPA limit of 43 mg/km (70 mg/mile) - but it sure beats driving around at 10-40 times over the limit until they finally call in my car for the real fix.

You may also like:
1. How to buy a gas sipper for less
2. What's so clean about diesel?
3. The Diesel to Electric Transition