The Diesel to Electric Transition

Diesel engines pack a roaring fuel efficiency. Modern diesel engines, with a turbocharger at the front end and scrubbers at the tail end, pack much higher efficiency than gasoline engines, and are much cleaner than diesel-powered trucks of the past. But are they clean enough? 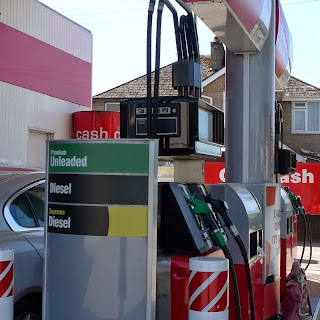 While modern diesel engines, both for personal and commercial vehicles, no longer spew out a cloud of black smoke wherever they go, they are not entirely "clean". The biggest problem is the small particles in their exhaust, that cause health issues in the lungs. The small particle (or PM2.5) pollution is much reduced with the use of "clean" diesel with very low sulfur content.

But where the sulfur content is high (China, India, Brazil outside the big cities) the use of diesel can still lead to severe smog and extreme particulate pollution. And even where the diesel fuel contains ultra-low concentrations of sulfur (US, Europe), very high densities of diesel vehicles can still cause problems.

In its drive to reduce carbon emissions, European countries have long opted to encourage the use of diesel engines, boosting the already high efficiency inherent in the engines themselves, with significant reductions in the fuel tax. In a way, it is a policy that works towards climate justice by taking on the immediate health risk of diesel fuel use by the home population, while the reduced carbon emissions benefit the planet as a whole (the European fuel efficiency standard is well ahead of the American one).

But supporting diesel has health implications. Because diesel engines last forever, older cars that don't have the scrubbers and particulate filters are still on the road and still cause high levels of small-particle pollution even with the cleaner diesel. Beside the particulate matter, nitrogen oxides (NOx) can be a problem. Despite good public transport options, the rise of the private car has been relentless; add that to the very high density urban environments found throughout Europe, and you have a real urban health problem.

(To put this in perspective: the current situation in European cities is still far better than how it was in the 70s and 80s when European cities frankly stank of exhaust fumes out of all those cars merrily doing their combusting without any filters or scrubbers. Ugh).

Many large European cities have declared themselves Low Emission Zones (LEZs) where older diesel vehicles are banned, and most personal cars as well. While this is of course the real long-term solution (most of these LEZs have excellent public transport), several European countries are now moving away from favouring diesel fuel as well.

France, where after three decades of pro-diesel policy nearly 80% of all cars run on diesel, is now doing an about-face, with the prime minister, Manuel Valls, making the stunning pronouncement that France's support of diesel fuel has been a "mistake". Starting January 2015, France will phase out the subsidies on diesel taxes, which currently makes diesel 20% less expensive than unleaded gasoline. (In comparison, American gas stations charge about 15% more for diesel than for regular unleaded)

I hope they put some of that extra revenue into public transport improvements. At any rate, there are plans for enlarging LEZ areas, and giving perks live free centre-city parking to very low emissions vehicles such as EVs.The steep hike in diesel prices will be softened by a bonus of up to € 10,000 if you trade in your diesel car for an electric one.

It is likely that the UK will soon go the same way on diesel cars: a European court has ordered it to clean up the air in its cities, where NOx from not-so-clean diesel has reached unacceptably high levels. I would think it is quicker and cheaper to clean up the supply of diesel to it has the same ultra-low sulfur content as the rest of Europe.

A few decades ago, it made sense for European governments to favour the new generation of diesel cars that deliver the much-reduced carbon emissions. But now that European carmakers are in good position to start selling electric cars, it is time for this transition. Although I repeat, in the long run they should encourage the transition away from the personal car altogether.

Carmakers will probably start selling more diesel models in the US now that the European market is shrinking. It wouldn't be the first time that they put their latest technology into the more demanding European market, introducing it to the US with a few years' time lag.

And that's actually okay. The US is a much better place for diesel cars for several reasons: Most Americans still live in suburbs and small towns where the pollution from diesel cars is not a critical issue; in rural areas the particulate pollution overwhelmingly comes from dust from unpaved roads. Even in the cities, except for a very few, urban densities are much lower than in European cities. And Americans drive more, so the higher purchase price for a diesel car is offset by the lower cost to run it, as well as the longer lifetime. Adding more diesel cars to the nation's fleet would help significantly lower carbon emissions from transportation.

Living in a small town in the US, I am going to keep driving my diesel car without worrying about its particulate emissions. I wouldn't encourage CelloPlayer to stand in its exhaust, but I wouldn't do that with any car. Its 45 mpg highway mileage still beats most cars. Meanwhile, I'm doing my bit to get proper bike paths and other infrastructure that allows the real transition we need. And I'm waiting for the EV that makes my heart beat.

You may also like:
1. Stop the Smog: use cleaner coal and diesel.
2. What's so clean about diesel?
3. Average Work Commute Takes Six Weeks a Year

Email ThisBlogThis!Share to TwitterShare to FacebookShare to Pinterest
Labels: diesel