Low Traffic Zones: anything but cars

Europe has a growing number of Low Emissions Zones: This generally means that access to motorised vehicles (especially those with older emissions standards) is restricted in certain areas of large cities. For Rome that's about half of the metropolitan area inside the ring (A90 and E80).

The LEZ area is served by a network of commuter trains and buses. Since a bus or train ticket is valid for 100 minutes after you get on, that can get you from the centre of Rome to anywhere in the greater metropolitan area, even well outside the ring road. Tourists taking the commuter train to Rome's ancient harbour at Ostia can get there for €1.50, the standard metrebus fare in Rome.

But if you happen to choose a sunny weekend day for that trip you will find the commuter train packed with a crowd of beachgoers headed for Lido, discreetly wearing swimsuits under T-shirts and sun dresses, and all happily chattering away. The festive atmosphere inside those cars can get pretty loud, and makes you understand why some longer-distance railway trains have designated quiet cars.

Inside the LEZ area, there are generally zones where most private cars are banned for most of the day, usually in historic city centres. There are exceptions to the rule, such as city buses, and private cars owned by residents of those Limited Traffic Zones (LTZs). Rome has the largest such LTZ: it covers the part of the city centre (where most tourist attractions are located). The exact rules about who is allowed to drive in and park, and when, are like the opening hours of various Italian institutions: highly complex, and baffling to anyone but the bona fide resident. And intruding into the LTZ without a proper permit can land you a hefty fine.

But like in many other metropolitan areas, a car is more of a liability than an asset, anyway. Especially in the oldest parts where streets are narrow, the easiest way for healthy people to get about is on foot. Besides, if you walk it's easy to nip into a cafe to enjoy your morning cappuccino (standing at the bar) and nip out before five minutes are over: try to do that if you have to park your car. 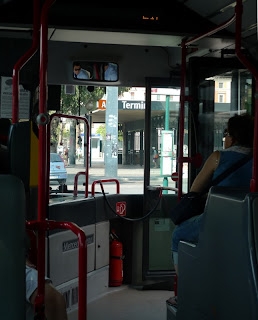 For longer distances, buses are cheap and frequent, and the subway is fast and very efficient. A single ticket is valid for 100 minutes including changes. And it allows chattering with friends and colleagues which you can't do if you're doing a solo commute, isolated in your box on wheels. It often seems as if everybody who has a companion to talk to, talks. Sometimes simultaneously. And many of those who don't have a companion will be talking on their mobile phones. All in those melodious Italian tones that CelloDad admires so much.

Those who don't like public transportation tend to take the motorcycle or motorino: the updated version is much sleeker than the Vespa scooter made famous by the movie Roman Holiday. Of course, you don't have to be Gregory Peck and Audrey Hepburn to share a motorino with your date. 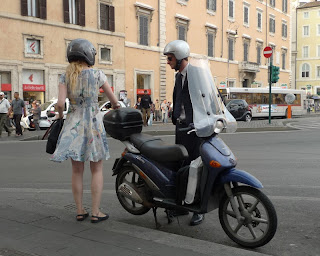 Most motorinos come with a handy compartment in the back, where you can stow a helmet when you've parked, and in which you can carry your gear, your shopping, or your briefcase. 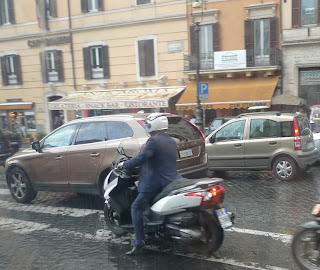 Because the motorino is used for going to work as much as for anything else. Some commuters ride them dressed immaculately (Italian suits, of course), not a wrinkle to be seen.

Motorinos are space efficient: six of them can be parked in the space of a single car, and entire streets can be lined with motorino parking, with neatly painted parking lines.

I was starting to think that a motorino is nice for sunny places like Rome, but that maybe moving a cello requires something larger, but I was proven wrong. 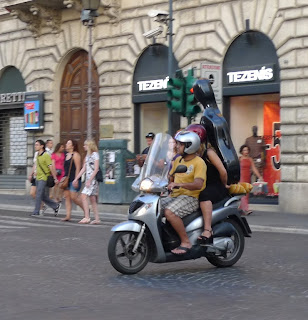 It appears it is possible to carry a cello (on your back) while riding a motorino. If you do that as a passenger, you can still continue chattering with the friend who's driving. 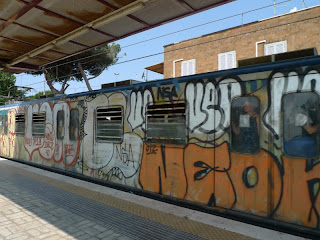 Yes, some trains are covered in graffiti. Yes, buses can be full. Yes, it can get loud in there. But one has to shudder at the thought of all those people trying to come into the city each in their own car. It would turn a perfectly lively and livable, if slightly gritty, city into a living inferno. I'd take the shared ride, thanks.