It could be argued that central Florence is more of a museum than a city. That is one good reason to avert as much car traffic as possible. And that is exactly what the centre-city Florence has accomplished: After a while you realise that most cars you see are the white taxis - and even of those not very many. There are a few bikes plying the cobblestone streets, but mostly people get around on foot. A medieval town is walk-sized, after all.

The way Florence has accomplished this is simply by banning all car traffic between 7.30am and 7.30pm, with very few exceptions. There is apparently a steep fine for cars entering the pedestrian zone without the proper permit. I imagine that handicapped residents are allowed a car (not that there are many parking spaces: those are carefully arranged outside the old town). And there is the fleet of white taxis, many of which are hybrids or EVs: among their number are quite a few Prius+ hybrids, the kind that could in principle seat seven.

The upshot is that the city streets are pleasantly unclogged of automotive traffic: it's so quiet you can hear the flocks of swallows go by as they call to one another. The air is clean, so you can enjoy a good meal at one of the many outside venues. And I bet that the exterior of the magnificent cathedral will stay cleaner for much longer, after the current round of restoration leaves it blindingly beautiful. 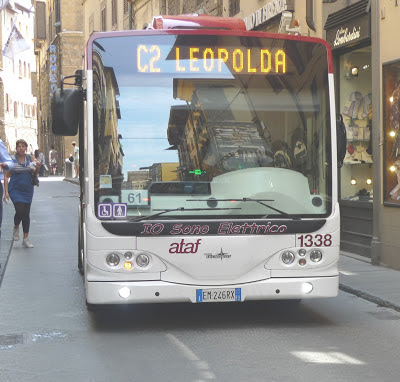 Many of the city buses are electric; all are inexpensive and frequent. So it's really silly to try to come here with a car. Besides, walking around you can try to imagine what it was like to be in this city in the heady days of the renaissance, among all the art, literature, philosophy and science swirling around the place.