One year into the COVID-19 pandemic, we've learned more about virus biology than we cared to know; done more zoom meetings than we wanted to sit through; learned that, when society gets turned upside down, a few ugly things come to light; re-discovered our bikes; and binge watched shows. It's been quite a year, and the lucky ones among us have spent much of that year at home.

Like many others, I discovered Korean tv shows. It's like going on a holiday, but from your own couch: you get to struggle with the language, even if only passively, and learn about the culture a little bit.

It's different. For starters, people address each other by their full names, family name first. It's a change from Japanese shows where characters address each other by the family name only. But I suppose in a place where there are only so many last names you have to add the given names - I am told that the Korean version of looking for a needle in a haystack is "looking for Mr Kim in Seoul".

It seems Asians in general have only recently discovered the kiss. They don't even have their own word for it, apparently: in Korean romantic comedies they use the English, "kiss" (pronounced "kis-su"). You can tell it's novel because a kiss tends to be shown with a dramatic sweep of the camera, and usually at least three times, from different angles. At first it takes you by surprise, then it's hilarious. 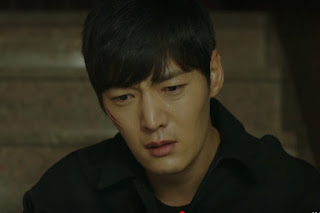 Scene from Tunnel, in which the very manly main characters both cry often.

There is this myth around of the inscrutable Asian, but many Korean shows depend on the close-up; the changes in facial expression carry the emotional story of the show. One of the important emotions is sadness, and Korean characters of both sexes show that, by crying. In Mystic Pop-Up Bar the stories revolve around the dead, so it's unsurprising that there's a crying man in just about every episode. But even cop shows (The Good Detective, Tunnel) feature men who are man enough to cry.

The product placement is shameless. I'm clueless about Korean brands, but learning fast because you just can't not see it. And you can't miss the placement of western brands, like when every one of the main characters in Itaewon Class starts driving a Mercedes.

Fights are different too. The typical Western hero hardly ever suffers a beating, but when he does take a hit, he bounces right back up, every hair in place, to deliver the retaliatory blow. Asian characters don't have that kind of teflon: one hit on the jaw (sometimes not even on the jaw) and there's blood on the lips. Fights don't look clean at all, they're more like scuffles, and somehow feel more realistic. 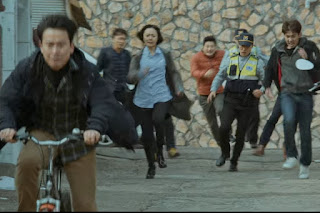 Scene from Stranger, where the getaway vehicle is a bicycle, subsequently discarded as the culprit jumps over a balcony. The cops in hot pursuit are, of course, on foot.

Here's another feature that you can't miss: Korean cop shows have no car chases. Occasionally there is one, but in most chases, the culprit tries to get away by jumping over walls and sprinting down ways barely wide enough for two bicycles to pass each other, let alone a car. Shows set in Seoul also tend to have chases on very hilly streets. The music is pumping, your heart is pumping, but instead of the cop or the culprit shown madly turning the wheel or - in European chases - gamely changing gears, this chase is all about whose lungs and legs win out. It's cool and refreshing!

You may also like: 1. Measuring Loss in Terms of Human Suffering, Not Dollars 2. The Car as Apocalypse Meter: Bread Line 3. Why Bicycle Riding Is Good For Democracy

Posted by CelloMom at 5:20 PM No comments: 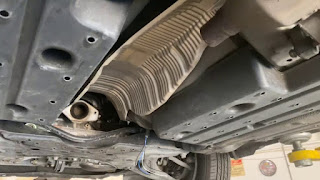 Posted by CelloMom at 1:38 PM No comments: