Extreme weather and the migration of drivers' licences 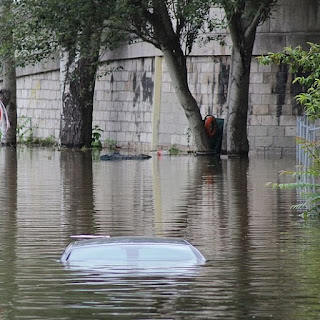 Nearly a million cars may have been ruined by Harvey, and rental car companies and dealers are scrambling to restock vehicles in the Houston area as the waters recede.

Which gave me this idea.

There was a massive exodus from New Orleans when hurricane Katrina hit it in August 2005. Only a third of evacuees returned to the homes they were living in before the hurricane. A large fraction never came back to the city at all.

What happened to those people, and where are they, a year after the hurricane, five years, ten?

In a country that eschews things like an identity card, or resident registration in cities, the movement of people is terribly difficult to track.

But wait! Americans do have a proxy to the identity card: it's the driver's licence. The vast majority of adults have one. Crucially, the driver's licence is tied to your address. If you move, you need to change the address on your licence, at the latest when you have to renew it. If you move out of state, your driver's licence from your old state is the key to getting one in your new state (without the bother of going through the road test).

This means that state Motor Vehicle Departments should have home address records from which one can deduce the movement of people, both inside the states and among states. There is always some baseline movement: this is a mobile country after all, and people are on the move all the time, chasing jobs, boyfriends, better weather.

But the aftermath of an extreme weather event should stand out clearly from the baseline. For instance, following Katrina, one should be able to map the huge extra flow of people out of New Orleans, and get a sense of where they settled, at least on a time frame of five years, the usual renewal period of driver's licences.

Motor Vehicle Departments are rightly keen to protect people's privacy. But we're talking big data here, where individual can be anonymised, because of the sheer number of records.

The insight gained from mapping the population displacement following an extreme weather event can be crucial in helping cities to plan. For instance, you can identify the zipcodes and neighbourhoods which are exodus hotspots, and figure out ways to make them more resilient. You can also look for what kinds of places are the most frequent destinations for the displaced.

Because Katrina was followed by Sandy, and Sandy by Harvey. In a changed climate where warmed ocean waters cause hurricanes to be supercharged, you can be sure there will be more such catastrophic events that will displace thousands.

Think of it this way: when, in the space of two weeks, there are two hurricanes that are described as "once in 500 years" events, you know climate has changed.

You may also like:
1. Outside The Box - the one with four wheels
2. Is an EV best for the climate? - "It Depends"
3. Ocean Microplastic and Your Car