Outside The Box - the one with four wheels

In the early days, every car was a convertible.

Seriously. Just look at this early car ad from 1898, from the Winton Motor Carriage Company, one of the first manufacturers that sold cars in the United States. 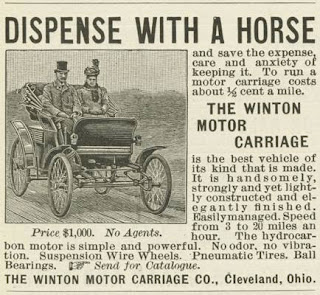 The name says it all: they didn't make cars: they made carriages. They simply replaced the horse with a "hydrocarbon motor", promising "no odor". That last bit makes sense if you remember that, while you have to sit behind the horse and get to experience whatever comes out of it, the motor exhaust can be directed behind you where it brings pollution to everybody else on the road.

Ten years later Winton installed a wind shield in the front. A decade after that their cars had a permanent roof and looked much more like that we think of as a car today.

I'm thinking about this because it's apparently extremely difficult to break away from the way things are, and particularly from the way things have been for generations. After all, our roads still follow, by and large, the design of Roman engineers.That's partly why the monorail train, with its narrow footprint and its promise for high efficiency transport, is such a startling novelty. One that's suspended from the rails is even more startling, like the one in Wuppertal, Germany. 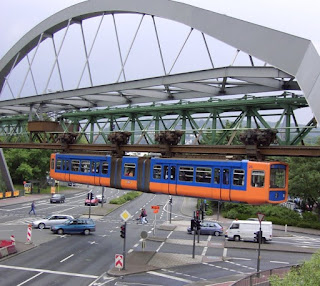 We are now at the cusp of another transition: the one where the hydrocarbon engine is replaced by an electric motor. This is, of course much less of a visual disruption than replacing the horse: the electric e-Golf looks exactly the same, on the outside, as the diesel Golf.

I think of that as a lost opportunity.

Because much as I applaud the transition to electric vehicles, I think too many of us are still relying on that sole transition to help us decarbonise our transportation system.

Electrifying the fleet is only a small part of that decarbonisation. A serious plan must include a big drive in efficiency: by that I mean the sharing of cars, whether through car share programs (a small step) or through sharing the trip (a much larger gain).

Sharing a car with only one other person is already a near-100% increase in the transportation efficiency, not only in the way of energy used for that trip but also in terms of the space you're taking up on our increasingly congested roads.

In that regard, nothing beats public transport for effiiciency. It's much safer, too. If I were you I'd much rather share the road with the professional public transit drivers, who are much more safe drivers than the average mom with a sleep deficiency (that would be me; but there's plenty like me out there on the roads).

The solution to the desperately congested and polluted streets in large cities lies in a good public transportation network that is used by everybody, not only the poor. The youngest generation already knows this. They also know that traveling that way frees up valuable time that you can work, converse with your friends, or watch cute cat videos. It sure beats staring at the licence plate in front of you while you clutch your steering wheel in frustration.

By all means, make those buses and Uber Pool cars electric. But do think outside the box: the one with the four wheels that you occupy by yourself.

You may also like:
1. Asleep at the Wheel
2. Why are cars so small outside the US?
3. How much horsepower do you need?