Why are cars so small outside the US?

A science fiction story once reflected that the planetary diaspora of human vehicles still basically followed the size standards set by the Romans when they built Europe's first interstate highway system. This is true of NASA's Mars rover "Curiosity" which is to be launched later this month. 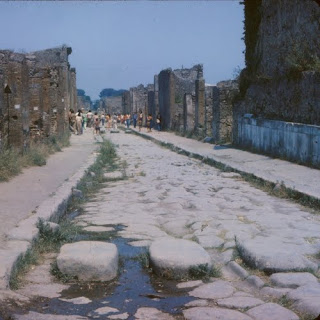 It is true of earth-bound passenger cars built today, most of which would have no trouble fitting in the grooves worn by Roman ox carts and war chariots, such as the ones found on the stone-paved streets of Pompeii.

The legacy is inescapable, even for Americans who are said to like everything big: houses, TV screens, softdrinks cups - and cars. American cars grew steadily larger until they became the behemoths of the early 70s. After the oil crisis, they suddenly became smaller, but over the decades since then they have put on volume and weight again, while elsewhere in the world cars have stayed relatively small.

Many governments responded to the 1973 energy crisis by embarking on a policy of energy conservation, which has led to innovations in the manufacture of gas-frugal engines, and the marketing of smaller and lighter cars. The US has chosen a different path toward its energy security - but CelloMom will refrain from hyperventilating about that.

In the 80s and 90s, Detroit, feeling the heat of Japanese competition, asked for and got limits on car imports into the US. Foreign carmakers responded by importing only their largest models which have the highest margin. It is still that way today: for instance, Toyota has a whole line of tiny cars that are never seen here (in this context, Yaris is not tiny).

Another part of the explanation lies in American geography: the country is simply enormous, and there's plenty of space to spread out. Compare this to the old country, whose cities have grown around a nucleus founded in the middle ages, where the old Roman roads set the scale for the expanding construction. In Asia, the oldest streets are even narrower.

In Europe, high population density and a good public transport network are further reasons that not much space is given to car traffic. Many cities have been re-designed to keep cars out as much as possible. Anyway, who wants to be in a Dodge Caravan negotiating streets that were designed for light horse-drawn carriages? And where would you park the thing?

In many places in Japan, the purchase of a car requires not only the financing, but also proof that you have a parking space for your future conveyance. There is a good reason for this rule: Even outside congested Tokyo, space is at a premium. CelloMom once spotted a minivan parked in a carport outside of Kochi. Its right-hand outside mirror had been folded in, and was virtually touching the carport wall. On the left (driver) side, there was about 8 inches of space. Either that driver was really skinny, or s/he climbed out through the rear hatch.

In the Dutch neighbourhood where CelloMom grew up there is no space for carports, just roadside parking. You couldn't park a Prius there. Well, you could, but the neighbouring spot had better contain a smaller car. Come to think of it, there are a bunch of really small cars in this neighbourhood, like the Ford Ka, the Peugeot 107 and the Toyota Aygo, the ones that fit very well in those parking spaces. 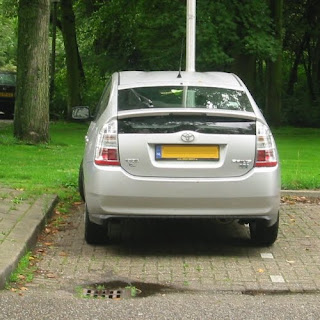 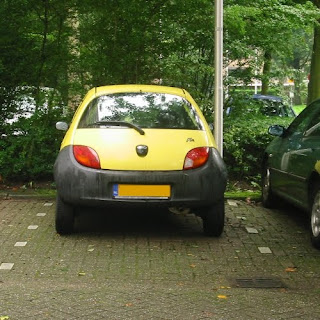 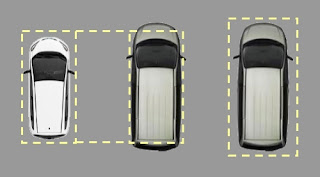 The picture above shows three adjacent parking spots in CelloMom's old neighbourhood, and one parking spot at a US mall, all outlined in yellow dashed lines. Where a Honda Fit would "fit" just fine (left-most car in the picture) in the tiny spaces, a Dodge Caravan would spill over on all four sides (middle car in picture). Providing small parking spaces is just another way to apply pressure to keep gas guzzlers out of residential neighbourhoods. That same Caravan fits comfortably at a US shopping mall (rightmost car). 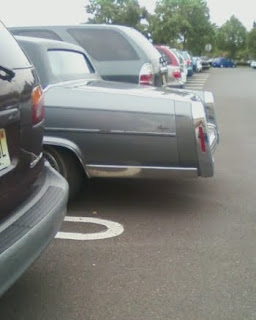 Even so, we've come a long, long way: the Caravan is dwarfed by some of the cars that used to be the US norm. One example is the Buick LeSabre: fully two feet longer than the contemporary minivan, it would stick way out among a row of Siennas and Odysseys and such. When the LeSabre first came out in 1959, you could only buy it with a 6.0L V8 engine that puts out 250HP. In the early 1970s one of the options was a 7.5L V8 engine. After that the engines got smaller and smaller, bucking the trend for many other models, until the last LeSabre was delivered in 2005 with a 3.8L V6 engine - but one that still delivered 205HP.
Take heart: engine efficiency has come a long way as well.


Responding to relentless pressure from governments that do subscribe to the Kyoto protocol, many car manufacturers outside the US have developed smaller, more frugal engines that still pack a punch: for instance, 211HP is what's delivered by the 2.0L TFSI gasoline engine in the Audi A4 Avant - you don't need a 3.8L V6 engine to do the job. Smaller engines are pushing fuel efficiencies well past 50mpg, even without hybrid technology, keeping down the purchase cost. For the short to medium term, CelloMom would put her money on those, rather than on the yet-to-be-developed but already expensive electric cars US carmakers like to push.