The Price of a Prius

Cars are cheap in the US. I've said this before (and I will probably say it many more times). That's because, in the US, the price of a car is just that: the price of the car. The sales tax gets added on, but that varies from 7.5% (California) to nil (Alaska, Delaware, Montana, New Hampshire, Oregon).

I've compiled the list price of a basic Toyota Prius in selected countries. I've chosen the Prius because it is sold everywhere, with the same hybrid drive and engine size, and in much the same version - although it's always amusing to see the variations in the websites. Here's a screen shot from Toyota's Chinese website: 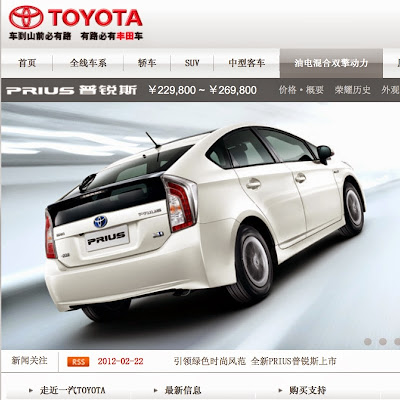 Yeah, I know: I don't read those kanji characters either. But there is a trick that makes it possible for English speakers to navigate websites that don't even use alphabets: my tips here.

Read more »
Posted by CelloMom at 6:11 PM No comments:

Solar Energy From a Road Surface is Now a Reality

Roads are great for allowing us to get from here to there in a quick and safe way. But while they're waiting to serve the next vehicle, they're just lying around idle, making the world warmer with their dark surfaces.

But it doesn't have to be that way. A city in the Netherlands just installed the first bit of road capable of generating electricity: this bike path - of course it's a bike path! - has solar panels embedded in the surface, beneath a protective glass layer.

Read more »
Posted by CelloMom at 5:25 AM No comments:

Limits on car sales in Singapore: a model for capping carbon emissions?

Singaporean authorities would rather that you not buy a car at all. After all, the tiny city state has excellent state-of-the-art public transport, and not a lot of space for roads and parking. But its wealthy population loves cars; even steeply increasing road taxes didn't keep the automotive overpopulation from becoming an acute problem. By the 1980s Singapore's road congestion had become unbearable.

Enter the Certificate of Entitlement.

The COE scheme is birth control for cars - to be precise, import control: Every year somebody counts the number of cars that have been retired from Singapore's automotive fleet, either by being scrapped or by being sold abroad. Also, the desired number of cars is determined for the next year. Those two things set the number of new cars that can be sold for that year, embodied by Certificates of Entitlement. A Certificate of Entitlement is the right to own a car in Singapore for ten years. The COEs go on an auction, so the price is determined by how badly people want to own a car. This month, a COE in the "small car" category (engines up to 1.6L and 130HP) went for S$ 63,880.

Read more »
Posted by CelloMom at 6:08 AM No comments:

I was getting too old for my bike.

Not that I'm getting too old for biking. Let me explain.

My trusty bike is a Canondale that has been with me for twentyfive years now, and on which I spent happy days with my friends, tearing up the trails in the woods.

The bike easily accommodated my children when they came: first in a baby seat that I hung from the handlebars, then in a child seat on the back. I have two Dutch bikebags that I hang from the luggage rack, for errands to the library, the grocery store, etc.. The only thing you have to be careful about is that the Canondale, with its aluminum frame, is considerably lighter than a standard Dutch bike, so you have to be more careful balancing cargo - such as a baby at the handlebars.

About those handlebars. You know how mountain bikes have straight handlebars? It gives you better handling on rough terrain.

But I'm never on rough terrain any more. And the straight handlebar, not exactly ergonomic, was starting to hurt my wrists. Leaning on them while biking doesn't help that at all. Also, as I'm getting older I find that I'm less comfortable leaning over: I feel much better balanced on a Dutch bike that allows you to sit up straight.

I considered importing a Dutch bike. CelloDad told me I was crazy. And he has a point. A good Dutch bike of old-fashioned quality is not a cheap item, and then you have to get it over here somehow.

But I did the next best thing: bought myself a Dutch handlebar this summer. Dutch bike shops have a selection of them, with varying widths and different curvature. A handlebar is much cheaper than a whole Gazelle bike, and you can carry it inside a suitcase. Last week, I finally made it to a local bike shop, the haunts of one of my rideshare children; they did an expert job of installing the handlebar. 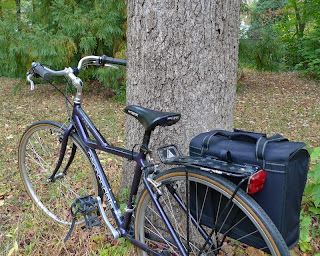 Read more »
Posted by CelloMom at 5:20 AM No comments:

Greener Ways to Get There

I've written before of the lowest-carbon way to get from here to there, and summarised it in this graphic: 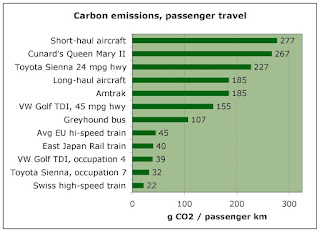 The people at 1BOG (which stands for One Block Off the Grid) have made a much larger infographic which is more complete and breaks things down by the distance traveled. I don't usually like large infographics, but this one is worthwhile because it shows that for transportation, not one size fits all.

For travel inside or near town, nothing beats a bike. (And it makes you feel happy. And it's good for you!).