Limits on car sales in Singapore: a model for capping carbon emissions?

Singaporean authorities would rather that you not buy a car at all. After all, the tiny city state has excellent state-of-the-art public transport, and not a lot of space for roads and parking. But its wealthy population loves cars; even steeply increasing road taxes didn't keep the automotive overpopulation from becoming an acute problem. By the 1980s Singapore's road congestion had become unbearable.

Enter the Certificate of Entitlement.

The COE scheme is birth control for cars - to be precise, import control: Every year somebody counts the number of cars that have been retired from Singapore's automotive fleet, either by being scrapped or by being sold abroad. Also, the desired number of cars is determined for the next year. Those two things set the number of new cars that can be sold for that year, embodied by Certificates of Entitlement. Let me rub this in: S$72,180, or about US $58,000, does not buy you the car: it merely buys you the right to go haggle with your dealer about the price of the medium-sized, small-engined car you wish to own.

Also let me emphasize, before your social justice hackles go up: In Singapore you don't need a car to get to your job, go grocery shopping, take your children to the cinema or swimming pool, or otherwise have a good life. So a car is a luxury item.

It should be said, this is not the only way to achieve vehicular population control. For instance, before buying a car in Tokyo, you must prove that you have a parking spot ready to house it. But the COE scheme fits very well with Singapore's competitive capitalist instincts. Besides, it works.

Right. If all you wanted out of this article is to get scandalised over the price of car ownership in Singapore, you can stop right here. But I think the really interesting part is how Singapore's COE scheme can be applied to fighting climate change. Let me explain.

When people call for a "price on carbon", it usually means that they want to levy a fee for burning fossil fuels, which causes carbon dioxide emissions into the atmosphere, contributing to global warming. The idea is to start off the fee pretty low, around $15 per tonne of CO2 emitted, and to increase it every year until fossil fuels become relatively expensive and businesses and households start to shift to renewables for their energy needs.

There are a few such schemes already in place, from British Columbia's revenue-neutral carbon tax, which is said to have modest success, to the European Emissions Trading Scheme (ETS). The ETS has helped reduce emissions, but could have achieved a larger cut.

So while carbon cap & trade schemes are working, they are not working fast enough. And here's why: Because the carbon fees are levied on businesses' carbon emissions, these schemes are a bit like trying to conserve water by putting a tax on people's wastewater stream. You can imagine the loopholes: There's leakage (both literal and figurative in the case of water); people might decide to use their bathwater for garden irrigation; people could take all their laundry to their cousin in the next state where they don't tax the wastewater; and so on. 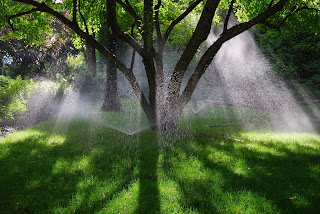 So it's asking for trouble to put a fee on carbon emissions: The huge number and variety of smokestacks and tailpipes instantly turns it into an intractable problem, an accounting nightmare, even before trading, offsets, credits and futures are introduced. In contrast, placing a levy at the source turns an intractable problem into one that is merely very difficult: this is because a rather small number of companies are in the business of fossil fuel production, and the production happens at a manageable number of sites.

This is a confusing point, so let me try to clarify the difference between putting a fee on emissions, and putting one at the source: Most schemes focus on carbon emissions, and seek payment from the businesses that burn fossil fuels, causing the emissions. That includes electricity generating utilities, airlines, construction companies, clothing manufacturers, farmers, and so on, all the way to the pizza place on the corner.

On the other hand, putting a levy at the source means that a carbon fee is paid by the companies that produce the fossil fuels, by drilling, digging or fracking. Those include Exxon, Shell, Peabody Coal, and producers controlled by the Koch brothers.

Let's think about carbon in term of flows: the carbon flow starts when fossil fuels are extracted from the ground. It then gets distributed to businesses who either burn it to generate electricity or make stuff, or pass it on to consumers who burn it to heat their homes or to make their cars move. So there are a myriad points where the carbon flow enters the atmosphere. In contrast, there are only a small number of points where the carbon comes out of the ground: where the flow begins. So Citizens Climate Lobby's proposal to levy a carbon fee at the point of extraction makes sense to me.

But one could argue that even that is not enough.

Here's the thing: we know how much fossil fuel is in the ground, and we know that in order to prevent catastrophic warming, most of those fossil fuels need to stay in the ground. Because once it's been drilled, dug or fracked, it will get burned.

Let's go back to the example of Singapore, which aimed to reduce severe traffic congestion. The government tried putting an increasingly steep road tax on cars. That didn't help much: Singaporeans (whose per-capita GDP is among the top five globally) could afford the tax, and the number of cars continued to rise inexorably.

What it took to stabilise the car population was a hard limit on the number of new cars: a real cap, placed at the point of import.

Similarly, what it takes to stabilise and then reduce global carbon emissions is the introduction of a well-defined and global cap on the extraction of fossil fuels. We know what is required to stay below 2C warming: an emissions reduction of 6 percent annually. The most effective way to get the required reductions is to cap the extraction of fossil fuels at those steadily decreasing levels.

Furthermore, I propose that the limited number of permits to drill / dig / frack are not sold at a set price but auctioned to the fossil fuel companies. (Let it not be said that I never say anything in favour of healthy competition on the free market). This "Cap & Auction" scheme is entirely separate from whatever agreements are currently in place between fossil fuel companies and the countries where they produce the fuels.

One permit is the licence to extract enough fossil fuels to result in the total ("lifecycle") emissions of one tonne of CO2; this accounts for the differences in carbon emission potential between, say, natural gas and tar sands bitumen.

A permit is to be used in the year it is issued, by the company who won the bid for that permit. Such a "use it or lose it" rule precludes trading, and the invention of futures, options and other derivatives on permits. Keeping things simple tends to keep prices from going up and down in wild gyrations.

Worldwide emissions is currently about 50 gigatonnes of carbon per year. If the Cap & Auction proceeds are $10 per tonne, the total yield is $ 500bn every year.

Of that, let the first $100bn be earmarked for climate support as requested by developing countries. (In fact, one can impose a minimum price, to guarantee a yield of at least $100bn). Perhaps that can also be earmarked as reparations, owed by developed countries for past emissions, since a large fraction of these costs are passed on to consumers in rich countries. That way the rich countries need not actively scrape together those funds (shamefully, they're not even coming close on that, anyway).

For the bulk of the Cap & Auction proceeds, the global equivalent of CCL's idea of a revenue-neutral carbon fee and dividend can be achieved by disbursing an portion to each country according to its population divided by its per-capita GDP (you can tweak that by also dividing by the country's carbon intensity). This disbursement scheme favours developing countries, which have the most pressing need for funds for climate mitigation and adaptation, while allowing for their development over the years.

You can't tell any country what to do with their part of the auction proceeds. And that is how it should be. After all, climate change will affect each region in a different way, so solutions for mitigation and adaptation will need to be optimised for local needs, and aligned to local culture and tradition.

One can imagine that some countries put those funds to work shoring up their coastal defenses or greening their transportation networks. Some countries might invest in sustainable irrigation works, renewable energy generation, or desalination plants. Some countries might decide to cut a "dividend" check for each citizen, and some might put the money in a disaster relief fund, to be used when climate disaster strikes. Which will happen to everyone sooner or later.

I know what this sounds like: it is the talk of a geek who has no clue of how international agreements are reached in places like the UN.

I'm not saying that the Carbon Tax, Cap & Trade, and other schemes to reduce emissions aren't working. I recognise and respect the results of lots of hard work by lots of people who do know how to negotiate. I'm saying that maybe they aren't working fast enough. If we are serious about emissions reduction fast enough that we can stay below 2C of global warming, maybe it's time to consider some alternative methods to put limits on our carbon emissions. A global Cap & Auction scheme is one.

(Updated 15OCT14 to clarify difference between imposing carbon fee at source and at emission point).