Now that my eldest has gained admission to a Canadian university, I am reminded that hockey is the Canadian national sport. And that my best friend in college used to play it: she learned to skate in an unbelievably short time, and got so good at running circles around everyone on the ice that she was appointed the captain of my dorm's co-ed hockey team, competing intramurally.

Before games, she would go around the dorm, tear people away from their problem sets and papers, to scrape together enough players to field a team of six (including the goalie). If she was lucky she got a few extras. I would come to some of the games, to shout.

These days, I don't think of hockey much. But I do think of hockey sticks, a lot. Michael Mann, the climate scientist, has done pioneering work on how the globally averaged temperature has been steady for nearly 10,000 years - if anything, decreasing slowly - until the onset of the Industrial Revolution. After that global temperatures started rising rapidly. So if you graph global average temperature as a function of time, the data lies on a curve that resembles a hockey stick.

Lots of global warming deniers have tried to beat up on Michael Mann (with non-physical sticks, like law suits) but the hockey stick metaphor has proven robust and, if anything, has become stronger over time. And while globally averaged temperature is the first quantity shown to have time dependence resembling a hockey stick, it is not the only one.

There are in fact enough hockey sticks to field a whole team, plus a few backups. The temperature is the captain of all the other hockey sticks.

Next up are a trio of greenhouse gases, carbon dioxide (CO2), methane (CH4) and nitrous oxide (N2O). It is the anthropogenic part of these greenhouse gases, all rising rapidly since the Industrial Revolution, each following their own hockey stick, that are at the root of human-caused global warming. Of these three, carbon dioxide is like the goalie: it tends to stay put, with its lifetime counted in hundreds of years. The product of the burning of fossil fuels is what we need to get around in order to score in our play to stabilise the climate.

In comparison, methane is like a nimble forward: fast (lifetime about 10 years) and packing a punch (it is a much more powerful greenhouse gas than carbon dioxide, and it's a good thing there's a lot less of it in our atmosphere).

A little over half the anthropogenic carbon dioxide remains in the atmosphere acting like a blanket. Most of the rest has been absorbed by the oceans. On the one hand that's fortunate, because we would have had much more global warming otherwise.

On the other hand, the excess carbon dioxide is wreaking havoc: The oceans, which have enjoyed a finely tuned chemical balance for millions of years, are now suddenly become more acidic. And marine life, which has evolved in a stable ocean, is now facing fast-paced changes for which it is not prepared. For instance, the lower pH (higher acidity) is corrosive to any marine life forms that builds shells. That includes some forms of plankton which are at the base of the marine food chain.

Speaking of oceans, the Arctic Ocean is suffering a devastating melt, which has already allowed ships to sail the formerly elusive Northwest passage. The Earth is losing its white ice caps that are so effective at reflecting incoming sunlight, and in the Arctic the melting of the sea ice exposes darker water that absorbs more sunlight and helps to hasten global warming. A real team player, this one.

So that's enough for a full on-the-ice team.

But we don't have to stop there: hockey teams can have up to twelve additional players waiting for their turn. So here are a few more sticks for those slots on the sidelines.

First up are the coral reefs. They are suffering a double whammy: because the waters are getting warmer, the symbiotic algae on their surfaces die, and the corals are bleached. Moreover, the higher ocean acidity is making it harder for the corals to grow their skeletons. Coral growth rates are already decreasing measurably, and this will continue since the oceans are not easily relieved of their carbon dioxide content.

On land, spring is arriving earlier. So much so, that the USDA's plant hardiness zone map used by gardeners and farmers have had to be revised. Those records don't go very far back in time, but in Japan there is an ancient tradition of enjoying the blooming of the sakura as the harbinger of spring.

Indeed, the bloom time of Kyoto cherry blossoms have been noted meticulously in records that go back to 800 AD, and those records show that the date of first bloom is shifting to earlier in the year - following its own rose-petalled hockey stick.

Cherry blossoms in Kyoto may seem remote, but here is something that many of us must have every day: coffee. Brazil has lost half its coffee harvest to drought this year, and that is reflected in a sharp upturn in the price of coffee, not exactly the kind of kick you'd like to get from your morning joe. And here is a player for the later in the game: sea level rise has a time-lagged response to the carbon dioxide emissions that cause it, but proceeds inexorably; the most recent IPCC prediction is between one and three feet by the end of this century.

It doesn't end there. There are many other hockey sticks waiting in the wings, about to develop or about to be discovered. I'll take a shot and predict the emergence of the following:

Food price.
California has been hit hard by drought. So far, farmers have limited the losses on their crops by pumping more water out of the ground than usual. But the aquifer can only sustain that for so long, and then the water shortage will hit the harvests, and food prices will rise. It's not just California: elsewhere, global warming forms a threat to corn, rice and other staples of the human diet.

Home insurance premiums.
Already insurers and re-insurers are putting their risk managers to work on getting a handle on risk from erratic weather patterns, hurricanes and other natural disasters. Homes build on flood plains are particularly vulnerable, but so are homes on mountain sides that are susceptible to mud slides, homes in tornado alley, and in the now extended hurricane lane.

Insect borne diseases.
As the range of insects extend poleward, so does the range of diseases for which those insects are vectors. Think of West Nile virus, dengue fever, malaria, all ailments that have so far been largely confined to tropical latitudes.

Okay, enough of that. Because while trouble is amassing, not too far into the future, we will not be completely helpless. We are getting ready to face the challenge, and are assembling a team of our own. The movers in this game are real people, thinking outside the box, working on solutions that make a difference in their own lives and that of our children - and making a living doing so.


On this side, the captain of hockey sticks must be that of solar energy capacity, which has been growing by leaps and bounds. Our greatest hope lies in the cost-effective, fossil free generation of energy. 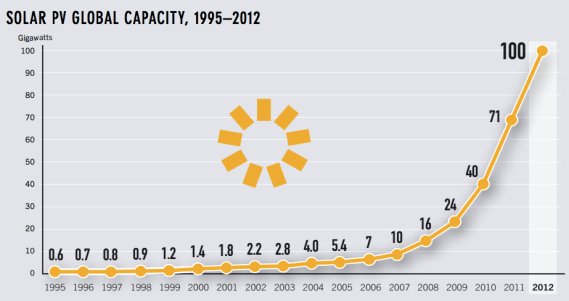 The co-captain spot must go to wind energy, which has also expanded rapidly in the last few years: While fossil fuel powered transportation still makes up a large fraction of our carbon emissions, change is coming. For instance, the number of electric vehicles and plug-in hybrids on US roads is obviously forming a hockey stick of its own.

And the same holds for the number of bike share programs:

Lots of people are starting to re-invent and re-imagine the way they live, the way they move around, the way they grow their food. The Transition Network is a loose collection of these local efforts, and their numbers are growing fast. 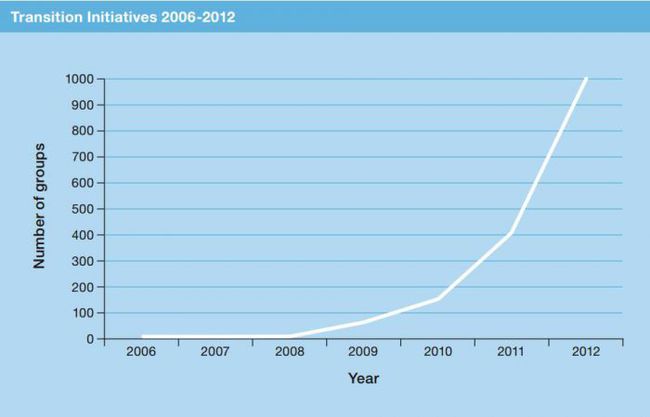 In addition, the number of CSA farms has been skyrocketing; it appears that many of us are re-discovering the joy of getting our food from someone we know by name and face, not too far from where we live, and on whose farm we are invited to put in some of the labour. For resilience, there is nothing like community supported agriculture.

Here you go: six hockey sticks for the Good Guys' team. And there are others waiting in the wings.

More good news is in the way we design our buildings: in the US, the number of LEED certified buildings have risen fast. A very few of these building are zero-net-carbon, that is, they generate as much carbon free energy as they consume, including the "embodied" carbon necessary in their construction. 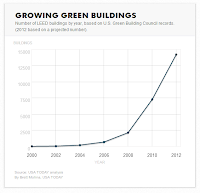 I don't have pretty pictures for the following, but there are some other exciting developments that give me hope.

One is the steadily increasing number of photovoltaic cells on the roofs of private homes. This kind of distributed clean energy generation increases our resilience in general.

There is also the increasing interest in installing transportation infrastructure that is inclusive instead of being car-focused. Complete Streets and similar urban planning strategies offer safe mobility for everyone, including the handicapped, those who can't afford a car and those too young to drive.

The number of farmers' market has been mushrooming, as have places that offer organic produce for sale. Our hope for food security lies in modestly sized, family owned farms where the owners really know their land.

I'm sure it doesn't end there, either. If you know of any positive trends that will help us win the climate change fight, please share in the comments!

You may also like:
1. Wedding on a Wind Farm
2. Google Maps: directions with options
3. The Car of the Future
4. We Need Good News on Climate Change