Wedding on a Wind Farm

We hear a lot about how bad the pollution is in China: how you can't see across Tiananmen Square; how children can't play outside; how measurements of particle pollution are off scale.

But change is coming, and like so many things in China, it does so in a big way. China is becoming a leader in renewable energy generation. The massive scale at which they deploy wind and solar energy farms play no small role in the precipitous drop of the cost of clean energy worldwide.

It's a transition. A good transition. And the people working to make that transition happen are fiercely proud of their work. Why not? I would be, too.

One young man working in a factory that produces wind generators decided to skip the traditional bridal photos at the park or the temple, and instead took his new bride to a wind farm installed by his company. In their wedding pictures, she is in his arms, radiant, and her frothy wedding dress is trilling to the breeze that powers the turbines. It's hard to find a more auspicious image of a new beginning. 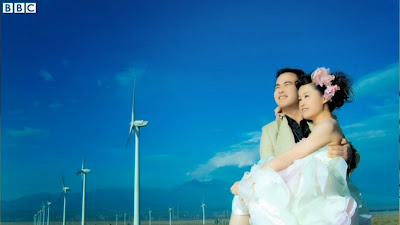 [Click on photo for BBC segment on wind energy generation in China].

As they say, shift happens.

You may also like:
1. Energy Transition: Moving Into a Better Future
2. We Need Good News on Climate Change
3. Ten Ways to Calm Car Traffic