Leaping Into the Year of the Horse

This post was written for inclusion in the monthly Natural Living Blog Carnival hosted by Happy Mothering and The Pistachio Project through the Green Moms Network. This month, our members are reflecting on the successes they had from last year, and setting goals for themselves this year. Check out all of the posts to get ideas on how you can start your New Year off green! 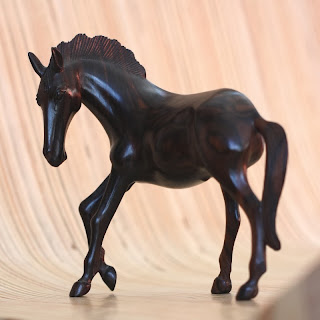 Yeah. I didn't know what that meant, either, until I read this article by Karen Abler Carrasco of the Western School of Feng Shui, which starts with the following words:

"There might not be a bigger shift of energies in the entire 60 year wheel of Chinese astrology than this one coming up – the shift from two Water years of deep introspection to the fast-paced spurt of extroverted forward propulsion that the Wood Horse brings. Hold on to your hats, folks, and realize that you won’t be able to, nor will you want to, slow your horses in the New Year ahead!"

I guess "deep introspection" is one way to name what has been basically a near-complete withdrawal into a cave. My own body getting into the Change was part of that. But mostly it was because I started seriously learning about the other change, the one that affects climate planet-wide.

And discovered why so many people just turn away from all that.

Learning about climate change is hard. Not that the science is hard: the mechanism of global warming is actually pretty straightforward. It's hard the way it's so hard to learn that someone you love is gravely ill. You read up on the illness. You try to keep abreast of the latest research. You look for remedies, both mainstream and alternative. And all the time you have to deal with the possibility that this person you love may be changed for life, or may die before his or her time. If you are a caregiver, you watch the illness progress. It's heart rending.

So that's what's been happening this past year for me. It's not that I've been a climate change denier before. But this year I have really started to read up on it, and the more I read the more the urgency of this planetary crisis becomes clear.

Because now it colours everything for me. I see the signs of global warming everywhere: in the wild weather, the news of droughts, floods and wildfires. The snow falling on daffodils pushing out of the ground in January. The rising food prices. The dearth of local apple cider last fall. I could go on and on. 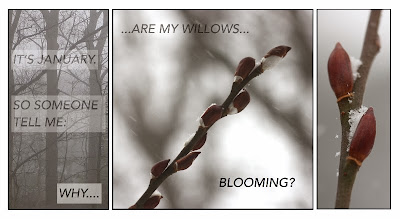 I used to refer to this kind of perception shift rather flippantly as the "Sex, Drugs and Quantum Mechanics" effect, meaning once you've experienced these you'll never look at the world the same way again. Learning about quantum mechanics profoundly changed the way I looked at the world - and none of it is even visible in everyday life.

The same cannot be said of global warming: once you open your eyes to it, you almost can't get away from the evidence even in your daily life. By November I was, to be honest about it, a wreck. The fetal position is pretty athletic compared to where I really wanted to be.

But the fetal position is not exactly an option for a mom.

Besides, I can't stand by and do nothing while climate change is proceeding apace: how would I face my children? If they or their friends ever ask me what I've done to safeguard their future, I don't want to be caught going "Uh, errm...."

I need to get up and get going. Or, as Ida Auken, Denmark's environmental minister, would say: "Don't get scared, get ready."

For me, the watershed moment came when I read a piece by Sarah van Gelder, which points out that there is actually plenty of progress in our fight against climate change: but they tend to not get covered in the media. So we have a mistaken impression of unending gloom and doom which is not necessarily correct - it's certainly not helpful.

Inspired by the article, I started to collect pieces of good news about global warming. They come in all shapes and sizes, and stories come from all over the world.

I started reading stories about and by the people who made the changes happen. I found two things that many of them have in common. In the first place, climate change leaders aren't necessarily heroes because they are fearless. In fact, for many it is precisely being scared out of their pants that has spurred them to action. Rhian Salmon has put that in words in a marvelous (and very inspiring) way in a 13-minute talk called "Sailing, tsunami and climate change". You need to be scared enough to spring into action, but not too scared that you're paralysed. And to have a friend by your side.

Which gets me to the second point: none of these climate activists stand alone. They build a network, they reach out to allies both likely and less so. They collaborate with the willing, and cajole the not-quite-convinced. They go for solutions which represent a win to all parties concerned. Above all, they listen. In an eye-opening article, "Speaking About The Unspeakable", the amazing Joanna Macy talks about how it is exactly the act of listening to the person with whom you are having the conversation, that opens up that person to your thoughts and ideas.

So enough skulking in corners. I'm going to get out there again, if not at a gallop, at least at a brisk trot. I miss my friends. I'm going to hang out with them again, see movies with them, dance, share a cup of coffee, and (in one case) play the cello together. I'm going to sign petitions, advocate for climate-friendly legislation, work to get more road space for slow traffic in my town. It is not enough for each of us to do our bit: we also need systemic change to enable those individual changes.

I'm scheduled to give a talk on climate change at CelloPlayer's school later this winter, and am fishing for an opportunity to speak at the town's public library. Gathering information for these talks, I'm happy to find that both the school and the town are already doing many things toward becoming truly sustainable, and I am proud to be part of those communities.

Later this month, I'm going to a sustainability meeting where I'm to propose introducing a pay-per-throw scheme for garbage collection in my town. If you have to pay for trash pickup by the bag, you become very mindful of the trash you generate, and many towns see their trash bill get cut drastically, and their recycling rise hugely as well.

I'm going to talk to the ladies in the local yarn store and ask if they run a repair café. And if not, whether they are interested in starting one: a friend of mine is a fiber artist and is willing to lead that.

And this will just have to be the year I upgrade the insulation in our attic so it's up to the current code, it's way too thin right now. That should cut the carbon footprint of our house significantly.

Meanwhile, I'm going to take in more information the science way. I'm signed up for two free MOOCs (massively open online courses), a policy-oriented one offered by the World Bank, and a science-only course at MIT.


And wherever I go with this, I am determined to listen as well as speak. Starting with you. How do you react to climate change? How do you cope, emotionally and practically? Please share your thoughts, either here in the comments, or privately through Email. I pledge to listen to you.

Note added 24JAN2014: If you are interested in getting involved, even if to participate in click-to-sign petitions and campaigns for a safer climate, consider following either Climate Parents or the Moms' Clean Air Force.