The charged issue of electric cars

Are electric cars better for the environment? CelloMom has her own take on "MPG equivalent" and "CO2 emissions" that look so glowing on EPA stickers for electric vehicles.

Electric vehicles are now often touted as the way to help automakers meet the new CAFE standards for fuel economy. A few electric cars are already for sale, and their manufacturers like to stress the "zero emissions" aspect. CelloMom made a few eye-opening discoveries while comparing them to other cars in terms of fuel efficiency and carbon emissions. 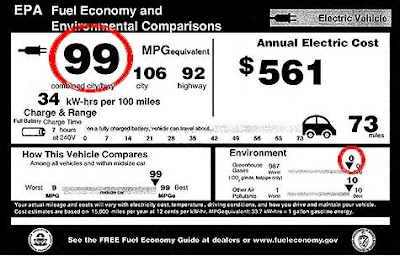 This all started when CelloMom spotted the EPA sticker for the Nissan Leaf that says "0" in the carbon emissions box (lower right-hand corner). The same EPA sticker also says that the Leaf has an "mpg equivalent" of 99mpg. That all sounds impressive. Impressive enough to make CelloMom want to check the numbers for herself. And this is what she thinks it ought to look like: 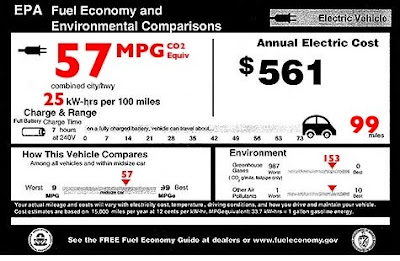 About those emissions.
Of course you can't deny that an electric car has zero tailpipe emissions. But saying that is like saying that you have no personal household garbage - because you eat out all the time. In reality, you are contributing to the garbage pile at the various restaurants that you patronise. So let's ask how much total energy it really takes (and how much CO2 is generated in the process) to get the charge into the battery that gives you 34kWh/100mi as it says on Nissan Leaf's sticker, or the slightly better 25kWh/100mi that most owners say they actually get.

CelloMom is not the first to point out that about two-thirds of the US electricity supply feeding those electric cars comes from burning fossil fuels (45% coal, 23% natural gas). The losses are staggering: only 33% of the energy inherent in the coal or natural gas fed into the power plant actually comes out as electricity.

If you ask how much total carbon dioxide (CO2) is released in the entire process of getting the kiloWatt-hours (kWh) of energy into the car's battery, you find that for the Nissan Leaf it is about 153g/mi (0.338 lbs/mi) for the average US owner getting their power from the local utility. This is really not bad; it's just not overwhelmingly great. It's just a bit (20-25%) better than the best small-engined cars that you can buy in Europe now.

Back to MPG.
The EPA calculates the equivalent mpg, or MPG-e, by comparing the energy stored in the battery to the energy you would get by burning a gallon of gasoline, and dividing it by the distance (in miles) you can drive the car on that battery charge. CelloMom argues that the more reasonable measure would be to compare the total carbon emissions, 153g/mi, to the carbon emissions from burning a gallon of gasoline. According to that measure, the fuel efficiency which CelloMom calls the carbon-equivalent mpg, or MPG-c, would be 57mpg. It's pretty good -- but not as impressive as the 99MPG-e on the sticker would suggest.

CelloMom emphasizes: these numbers are average for the US as a whole. Your particular utility's profile might be different: in Oregon there is a lot of hydropower in the mix. In other states it's more than half nuclear. This means that in some other states the electricity supply comes for more than 70% from fossil fuels. So check with your electricity provider. And if you live near flowing water and you powered your electric car from a water mill, you're a true green hero.

While you are crunching the numbers for your particular case, you might as well include the following consideration: The battery suffers from both cold and hot weather. At 32F (0C) count on a reduction of the car's range up to 30% compared to the "ideal" temperature of 77F (25C). Above that temperature, the battery lifetime starts to deteriorate; at 104F (40C) the battery's life is half that at 77F. So this suggests that electric cars will do best in temperate climates such as in the Pacific Northwest. In Minneapolis MN winters, the battery capacity and therefore the travel range will suffer; and Phoenix AZ summers will shorten the battery life considerably.

The rest of this post is about how CelloMom arrived at the red numbers in the modified sticker, above. You don't have to take CelloMom's (or anyone's) word for any number: CelloMom includes links to all the places where she found numbers, so you can check her math.

What MPG-e means.
What's an mpg label doing on an electric car? The MPG-e (miles per gallon equivalent) was chosen because consumers wanted an apple-to-apple comparison with gasoline-powered cars. In, truth, the natural unit for electric car efficiency is the kWh/100mi (kiloWatt-hour per 100 miles; see Tom Murphy's excellent piece on decoding fuel efficiency). But many of those who were polled by the EPA were confused by the kWh. So we got our easy-on-the-brain label. But the devil is in the detail of the translation.

To find the MPG-e for an electric car, take the battery capacity, i.e. how much energy can be stored in it, and divide it by the car's range (this ratio is measured in kWh/100mi). That battery energy is compared to the energy released (in the form of heat) when you burn a gallon of gasoline. Not all gasoline is created equal, but the EPA has chosen a standard of 115,000 BTU (British Thermal Units) per gallon of gasoline, or 33.7 kWh. Confused? See CelloMom's quick rundown on units for energy.
So:
1 / kWh/mi = 33.7 MPGe

That sounds marvellous, no?
BUT- CelloMom just can't help getting that itchy feeling about this. MPG-e as defined above sounds reasonable enough; it is certainly straightforward. But let us just take a step back: what is the whole point of the electric vehicle exercise? Is it not to curtail the emission of carbon dioxide which is a greenhouse gas?

Some, but not all, electricity comes from coal, the burning of which causes the emission of CO2 as well as other nasty gases, like sulphur compounds that give rise to acid rain. So let us follow, step by step, the path of the electricity, before it makes it way into your car battery, and let us trace it all the way back to its source.

Charging efficiency.
Let's start from the battery side. Have you ever felt the charger of your laptop after an hour's use? It's a little warm to the touch, and that's because the conversion from 110V AC from your wall socket to the DC battery is not 100% efficient. Nissan Leaf owners report a charging efficiency of 90% for a "good" charger; the remaining 10% serves to heat your garage.

Generation efficiency.
For power stations running on fossil fuels such as coal or natural gas, the efficiency is around 33%. In a coal-powered plant, the coal is crushed into fine particles and burned to heat water that drives steam turbines that generate the electricity. It's a really complicated and rather magnificent piece of engineering, and there are losses at every step, adding up to 67% of the original input energy.

Production efficiency.
Of course, the coal doesn't show up at the power plant door by itself: it needs to be mined (and sometimes transported, although many coal-powered plants are built close to the mines to cut transportation costs). For coal, the energy return on investment (EROI) is 80, that is to say it takes the energy of one pound of coal to get 80 lbs of coal to the mine mouth; i.e. the production efficiency is 80/81 = 98.8%. Natural gas has EROI of 10, so a production efficiency of 10/11 = 90.9%. (Incidentally, solar energy has a pretty low EROI, just 6.8, because it takes a lot of energy to make the high-purity silicon that goes into a typical solar cell. Hydropower gets the best efficiency, EROI > 100).

As CelloMom has said before, it you live next to swiftly flowing water and powered your Nissan Leaf from a water wheel, you're a green hero. The rest of us average Joes will have to plug in our electric vehicles into the socket, and the average socket still gets its power from conventional means. In the US, about two-thirds of all electricity is generated by burning fossil fuels. Table 1 below lists the carbon dioxide emissions for each type of fuel at the generation point, as well as the average total CO2, with ("Total") and without ("Plant") accounting for the energy cost of production.

On average in the US, electricity generation causes CO2 release of 613 g/kWh (1.350 lbs/kWh) at the plant, not including the carbon released in the production stage of the various fuels. So the carbon footprint of a Nissan Leaf owned by an average US electricity customer, at 25kWh/100mi, comes to 0.25 * 1.350 = 0.338 lbs/mi.

CelloMom wants to emphasize at this point that these are average numbers, and that they paint the best possible picture for the average US user. We use the 25kWh100mi efficiency reported by users rather than the lower official efficiency of 34kWh/100mi. CO2 emission in the fuel production stage has been ignored. The 20% contribution from nuclear sources is quoted at operational value, including the construction of the nuclear power plant, but excluding the cleanup costs of the now rather old plants (that nobody is very eager to discuss).

In reality, the mix of primary energy sources for electricity varies from state to state, with the largest contribution coming from, for example: 69% natural gas in Nevada, 56% nuclear in New Jersey, 58% hydroelectric in Oregon, and so on. Your particular utility will have its own profile.

To make an entirely fair comparison with gasoline-powered cars, one also has to take into account the efficiency of production and delivery of gasoline: the "well-to-pump" efficiency is about 0.83%, so the total carbon emission is 20% higher than the fuel economy would suggest. To find the true carbon-equivalent mpg of a gasoline-powered car, find the real mileage as reported by real-life users, MPG-r, and multiply that by the production efficiency of 83% (the same number for both gasoline and diesel): MPG-c = 0.83 * MPG-r.

Armed with this information, we can now put together a picture for any given car. A few examples are included in Table 2 below, which shows the "official" fuel efficiency as stated in the carmaker's promotional material, the "real" efficiency as reported by actual users (MPG-r), the carbon dioxide emitted per mile of travel, and based on that, the carbon-equivalent fuel economy (MPG-c). The VW Golf numbers are for the 2001 2.0L gasoline model.

Among the cars in Table 2, the carbon-equivalent fuel economy is indeed highest for the Nissan Leaf at 57 MPG-c, but not by as much as suggested by the 99MPG-e on the EPA sticker.

The hybrid Prius does pretty well, at MPG-c = 42 mpg, closely followed by the diesel-powered VW Polo.

And this is where CelloMom's looks her past actions in the eye and admits that her current car, a 2001 VW Golf, is scandalously un-frugal, especially for something that size, belching more than a pound of CO2 at every mile traveled. CelloMom hangs her head in shame. (In fairness to the Golf, the 2012 version is quite a bit more frugal at MPG-r up to 50mpg).

Nothing like a bunch of hard numbers to rub your nose into the cold facts.