How you pay for car features that you don't need

Here's my hypothesis: options packages are the vehicular equivalent of McDonald's supersizing your order of french fries and soda: it means car manufacturers can sell you more bells and whistles, even if you don't want or need them. But you still get to pay for them.

"Can I get my Golf TDI with a sunroof?" It's just the kind of question that brings a big smile on a dealer's face.
"Sure you can," he said, "We have the Sunroof and Navigation Package."

"Can I get just the sunroof?" I ask. "I don't need the navigation, for that I've got a husband and two children, and they all know how to read a map."
"Mmmm sorry, it only comes in the package."
"Okay: sorry, but no sunroof for me."

I didn't feel very strongly about the sunroof anyway: it's a nice luxury to have your hair messed up when driving around on a nice day, but I can do without it.

My fellow consumers, doesn't it irk you to be put into a box marked "Sunroof AND Navigation"? How about "Sunroof Sucker"? What if the only way to get a sunroof on your car was to buy the package called "Sunroof and Barbie-themed Neon Pink Upholstery"?

Of course it is cheaper to manufacture cars that come in a small number of variations. But the packages seem to be thrown together almost at random. I mean, just because you want the cold weather package that gives you seat heat, does that mean that you must want the Bluetooth hands-free calling system for your cell phone?

It is especially ironic that these packages have become so ubiquitous in the country where individuality is so highly prized. Whereas if you bought a VW Golf in Germany, they let you specify your options to the last detail, such as whether you want mechanically or electrically operated windows in the back. Try the German configurator page for the Golf. They don't presume to tell you what your personal and individual quirks might be. If you want leather seats in an otherwise bare-bones Golf, you can order it that way.

You do get to wait, usually 2-3 months, but then you get the car to your own specification, not the specs thrown together by some marketing team. It's not that much more expensive to build cars this way: in the one car factory I have visited, parts are brought to the assembly line by a huge system of computer-controlled conveyors. Some cars are three-door, some five-door. Colours are all over the place. Specs are all over the place.

For the assembly, it doesn't matter whether a particular car gets regular or "sport" seats, auto or manual transmission: the conveyor system is simply cued, digitally, to get the right item from the right rack, for each car. Every sixth car has its steering wheel put in on the right side: those are bound for the UK market. If I worked on that assembly line I would be grateful for the variation: it keeps you from turning into an automaton like Charlie Chaplin in Modern Times.

But the supersizing trick is so flattering to the carmakers' bottom line. Think about it: you get the customer to buy stuff they would never have bought if they had been given the choice. Items like a navigation system have high markup.

Volkswagen is not the only car manufacturer that resorts to these tactics. There are plenty of other brands that proudly proclaim in their car commercials that this and that option "comes standard". It sounds great, but all it means is that you are paying for stuff whether you want it or not: you have no choice. Note: they say it "comes standard"; they don't say it comes for free.

Here is a list of features that "came standard" with our new Golf, and that I don't need; in fact, I don't know what to do with some of it. The numbers show the price in Euro, from the German configurator page.

Here is at least € 3,500 ($ 4,500) worth of features that I didn't ask for but got anyway. These prices (like prices of everything to do with cars) would be lower in the US, but I estimate it would still come to at least $ 3,500 worth of unwanted equipment.

I would be more than happy to give up all that stuff in return for a $ 3,500 discount.

You see, I'm the "Volk" for which Volkswagen was made: just a regular guy. Also, I am a curmudgeonly geek: relatively insensitive to status, acutely sensitive to function. To me, my car is a means of transportation: it is not my living room, not my entertainment center, and not a toy. Nor do I need my car to tell the world, or remind myself, who I am. My car is just for getting me and my crew from A to B, safely.

That means I don't go tearing around corners, and I slow down when it's wet or snowy. That means I don't really need the electronic stability control that keeps me from fishtailing if I've been foolish enough to go too fast where I shouldn't.

Next, I don't feel a burning need to be plugged in wherever I go; I'm of the old school that doesn't do distracted driving. Indeed, I don't own anything that can communicate with the iPod or the USB connection. My children are screen free, so they don't have anything to plug in, either. So those connections are wasted on us.

Mist lamps: in our area, we get fog at most once a year. We've been doing fine without mist lamps for decades now.

Hill start assist: give me a break! If you can deal with the third pedal in the footwell, you can deal with using the hand brake for getting your car going on the steepest hills. It's part of the fun of manual drive. I might just ask for it to be disabled at the first service.

Air conditioning: we're not going to use it. We don't mind perspiring a bit, especially since that beats breathing the unhealthy emanations from the molds that invariably invade the manifold. I might yank this out, too: losing the weight of the AC unit will increase fuel efficiency.

Here is the problem: once installed, these "features" are nearly impossible to take out (=more expensive than it's worth).

But there is one thing that is very easy to replace: the wheels. This is where I got to work. Because I'm not taking the supersizing gimmick lying down.

I don't need the plus-sized "sport" wheels that give "better handling". The latter means that you can go around corners as tightly as the steering will allow, at 30mph, without slipping on the asphalt. We're talking about a one-gee sideways acceleration. This was never in my repertoire of "fun" things to do, and now with children in the car, a cello and eggs, it's out of the question.

On the other hand, those 17" wheels have disadvantages. For one, they're broader in the lateral direction, so they're less fuel efficient, and less safe in rain and snow; and they're thinner in the radial direction, so the chances of putting a dent in the rims is that much greater. My town's streets are pockmarked with tire-eating potholes. Towns and states are broke, and asphalt, which is derived from petroleum, is getting to be super expensive, so I am not optimistic that roads will improve soon. VW knows this: they tried to sell me insurance for in case a pothole dents my wheel; Premium: $500. Ka-ching. 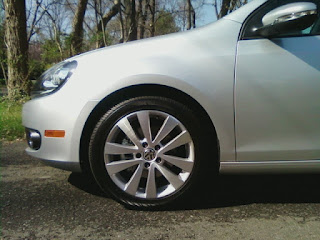 My dealer was very confused. It took me a while and quite a bit of pushing to convince him that yes, I am indeed determined to "downgrade" from 17" wheels to 15" wheels. Those are the sizes of the rims, and as you can see from the photos the 15" wheels have tires that have much more rubber (=protection) on the sidewalls; because while the rim is smaller, the outside diameter of the tires has to be the same for both sets. 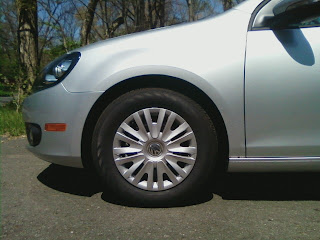 They tried to tell me that VW doesn't make the 15" wheels any more, but I produced a quote that I had previously got from the service department (those guys are my friends! and the ones who will give me the straight dope on what's available and what's not).

These are the wheels that, according to all the literature, are supposed to come with the gasoline-engine Golf, so they were just going to do a quick swap. However, to my dealer's surprise, there wasn't a single Golf on their lot, diesel or gasoline, that didn't have the 17" wheels. So they had to special-order a set of 15" wheels for me.

In the end I drove home with a new set of 15" wheels, a $1200 rebate check (the difference in price) and a happy feeling of relief: now I'll be a lot less worried about those potholes.

For complete disclosure, the 15" wheels are made of steel, not the rust-free aluminum alloy of the 17" wheels. I'll have to keep an eye on them during the wintertime road-salting season. But a replacement set costs less than $400, so if I have to do that in 6-8 years I'll still come out ahead. The tires for the 15" wheels are also less expensive to replace when the time comes for that.

I wholeheartedly commend my VW dealership. It's not their fault that Volkswagen USA has adopted the gimmick supersizing policy with their options packages. Still, once it became clear that this customer would not back down over those wheels, my dealer and his manager went out of their way to make me a happy customer. This is why I make the half-hour drive to see them; because in my experience, the VW dealer that's within walking distance of my house doesn't deliver that level of customer satisfaction.

My new 15" wheels look like donuts. Well, that's what wheels are: torus shaped. I'll drive on a set of donuts rather than a set of onion rings, thanks very much. The 15" wheels fit better inside the wheel wells, because they are thinner in the lateral direction. There was something not quite decent about the way the 17" wheels were barely contained in the wheel wells. This is a Volkswagen Golf, for heaven's sake, not a Ferrari F12berlinetta.