Some men like them super-sized. And we're not talking about women, or any part belonging to women. We're talking about the rims of car wheels. Car wheels? Why yes: for many cars, plus-sized wheels are a rather expensive option that has mystified CelloMom for some time now. Why are wheels with wider rims worth a premium up to $5000?

In case you are completely confused: Plus-sizing refers to the option of buying wheels for your car with larger-diameter rims. For instance, if the "standard" package has wheels with 16" diameter rims, the option with 17" rims is called Plus-1, that with 18" rims is called Plus-2, and so on. The picture below shows five out of 14 choices offered for the Audi A6 Saloon (Europe-speak for Sedan), culled from the German price list. Way on the left is the standard wheel with 16" rims, the next one is Plus-1, then Plus-2 and Plus-3, and finally on the far right is the Plus-4 tire with 20" rims. Don't ask why a German carmaker like Audi measures its wheel rims in inches, that one is way beyond Cellomom.

You can change the size of the tire rim, but you must keep the overall wheel diameter unchanged, or your speed indicator and mileage counter will be inaccurate. So as you go from a 16" rim to a 20" rim, the tires' sidewall gets smaller by 2"; you can see this trend clearly in the picture above. At the same time, the wheels get wider in the lateral direction (left-right direction of the car). Typically the recommended pressure is a few psi higher for Plus-1 tires.

So that's the what. But why? CelloMom finds that the benefits of plus-sizing falls in two categories: performance and aesthetics.

Performance, the Pros
"Performance" in this context means better handling. That's code for being able to zip around corners better and faster (on dry roads anyway), and to reach higher maximum speeds.

Response time:
Because plus-sized tires have a smaller sidewall, the tire distortion that happens when you go around a corner is reduced, and you can change direction that much faster.

Better traction (on dry roads):
The weight of the car makes the tires sag a little. With smaller sidewalls and higher pressure this distortion is reduced, so the contact patch, where the tire touches the road, is shorter in the tangential direction, or the front-back direction of the car. But the tire is also wider, so the contact patch is wider laterally. Because that is not the rolling direction, this gives better protection against skidding. With a plus-sized tire, instead of starting to skid at 0.83g, you keep frictional road contact until 0.88g (from a Car&Driver test).
Zow. At these accelerations, without seat belts the passengers would be banking the corner sitting at nearly 45 degrees from the usual vertical. Eggs and cellos can be written off.

Higher maximum speed:
Some physics connected with the shorter and wider contact patch (which CelloMom doesn't understand) allows plus-sized wheels to reach higher maximum safe speeds. We're talking an improvement from 150mph to 170mph. Since both these speeds are more than twice the US highway speed limit, CelloMom can't be bothered to dig up the relevant physics.

Performance, the Cons
These performance improvements come at a price. Here is the other side of the argument:

Fuel economy suffers
Plus-sized wheels are heavier than standard ones. In the Car&Driver test going to Plus-4 resulted in a 10% decrease of fuel efficiency.

Bumpy ride
Because the tires' sidewalls are smaller, and because the pressure is higher, plus-sized tires don't absorb any unevenness in the road surface, so you'll feel connected to the road in more ways than one. The shock absorbers in the suspension system are optimised for a lower frequency range, so they won't help much on gravel, unpaved roads and other conditions which are unknown on race courses. 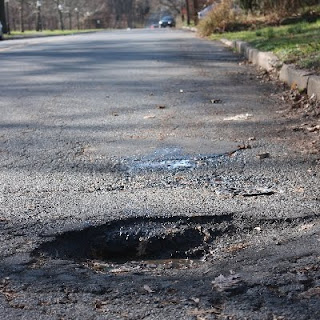 Worse traction in snow and water
Plus-sized tires are wider, so squeezing surface water away through the treads is harder. The result is that it's much easier to start hydroplaning in rainy conditions. And because the contact patch is shorter in the direction of travel, and also because of the higher tire pressure, traction is worse in snowy and icy conditions. 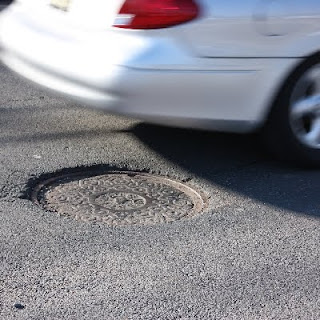 Wheel damage
You know what they say about wheels: when you bend it you can't mend it. A reduced side wall on a tire makes the tire more prone to rupture, and is the shortest way to a damaged rim. In the 2010's US, roads are not only not smooth, they are downright dangerous to the well-being of wheel rims. Never mind the broken glass and the rusty nails: CelloMoms town sports potholes large enough to do the cooking for half a village. And while potholes are merely deep, what's arguably even more dangerous are manholes which have inexplicably sunk into the asphalt, making nice paella pans. Some of those are deep enough to feed half the village also, and sport nice sharp and well-defined edges that will cheerfully put an end to the circularity of your wheel.

Cost
Which brings us to the funds required to acquire (or replace) the wheels. For the Audi A6 example, the 16" wheels come standard. Getting successively larger wheels gets more expensive. The most expensive 20" wheel is a €3650 option ($4700 at today's exchange rate).

Okay. That was function; how about looks? CelloMom did a small and non-scientific survey among her friends, who were all mystified as to why larger wheel rims are considered more attractive. So, maybe that just means that we are not in the tribe of car enthousiasts. CelloMom asked around at various dealerships, figuring the people who sell those expensive options might have a clearer idea. But the best she got from this (also small) survey is this statement from one dealer, delivered firmly: "The car enthousiast (such as myself) prefers the look of a smaller sidewall." The Car&Driver article on plus-sizing starts by stating, "The aesthetic appeal of larger wheels and tires is undeniable". That didn't help CelloMom at all.

But cruising around the car world, eventually you run into cars that someone like CelloMom would not ordinarily drive. Check out this Ferrari: in this incarnation you can barely even see the tires, because the rims themselves practically fill the wheel well.

A light went on in CelloMom's head: "aesthetics" just means making your car look more like a Ferrari. Even if you never approach 170mph, even if you never take corners at close to 1g centrifugal force, the idea that you look like a Ferrari at all times is still worth a lot - up to $5000, in fact.

One good reason to have a large wheel rim in a race car, besides the improved road-tire interaction, is the dissipation of heat. At high speeds and large accelerations (including deceleration), wheels heat up from the road contact, and braking produces a lot more heat than in ordinary road conditions. CelloMom is not into watching car races, but heard that in some night-time races you can see the wheels glow from the heat generated by the brakes. So you want to design your wheels with a central area that is as large and as open as possible, perhaps also fiddling with the spoke design to whisk away all that heat.

You will notice that, for the sequence of Audi A6 tires, as you go from 16" to 20" the wheels become more open. For the 19" wheels (see picture below) you can look right in, reminding CelloMom of a cathedral window: open, beautiful, and very delicate. 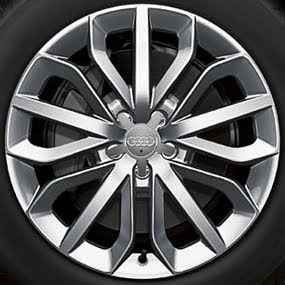 Call CelloMom a nerd. (She won't deny it.) When it comes to cars, she is overwhelmingly more sensitive to actual function than to looks or ideas. She never lives in the conditions where the improved performance of plus-sized wheels would make a difference. She's more than happy to drive in a vehicle with the regular set of tires: More rubber between the rims and the road means more protection from things like rattling teeth, dented rims, ice-skating cars, and the depletion of the purse. We'll take it.