Can you do without the - now optional - spare tire?

Personally, CelloMom could do without the spare tire. But what about one for a new car? Very, very quietly, carmakers have stopped including a spare tire in their new vehicles. After all, taking things away can't be done with the same fanfare as when adding new features. Can you just see the ad? Cue deep male voice: "The NEW and IMPROVED Jeep Wrangler, now WITHOUT spare tire: because we want YOU to enjoy the extra 0.05 mpg!" Most modern cars do get increased fuel efficiency when their rears are as smooth as possible - which is why they had the spare in the trunk.

Taking the spare out of the trunk decreases the total weight of the car by about 25lbs, or less than 1 percent of the total curb weight, from around 2500lbs for a small car like the Fiat 500, to over 4000lbs for a minivan. Don't buy the carmakers' tearful argument that they were driven to remove the spare tire by the harsh requirements of the new fuel efficiency standards: that argument doesn't wash.

What are your options? You can settle for the inflator kit that is offered for free. You can buy the optional "donut", a nearly-roadworthy torus that allows your car to limp to the nearest garage. You can buy a full-size spare tire, for up to $300. You can, on some models, opt for a set of "run-flat" tires, which can get you to the next garage even when completely flat, without damage to the rims. Those cost quite a bit more than $300.

There's the real argument: it's a cost-cutting measure. They make you pay $300 for something that they used to throw in standard and for free. And then they have the chutzpah to crow that there is suddenly SO much extra space in the trunk. 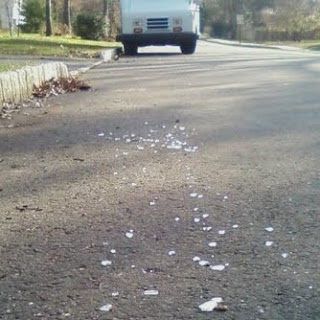 CelloMom will always opt for the full-sized spare. The roads and streets around where CelloMom lives are just not cleaned often enough or well enough. CelloMom is blessed with a flat tire about once a year, usually on some quiet road where it's nice that you can get yourself back on the road. CelloPlayer is getting pretty good at those tire bolts. If it ever happens on a highway it would be better to call AAA for help: it's just too dangerous to be messing around when just a few feet away traffic goes by at 65mph.

CelloMom found out about this spare tire issue when helping her dad buy a new car, over the summer in Holland, where he lives. He was offered, and refused, the option of the full-size spare. CelloMom was amazed. Here was a guy who is seriously into backup (that, anyway, is his excuse for owning three rather complete sets of tools). On one trip he brought a spare cylinder head; he put up with the teasing, until the spare ended up saving the trip. On certain road trips, like those in Indonesia, he is not happy until he gets at least two cars to go. With a spare tire in each car. And here he is saying no to a spare tire for his new car?

"You're just too stingy to cough up the 200 Euro", CelloMom said. We like to tell each other the truth. He turned around, and said,

"I haven't had a flat in forty years."

Whoa. CelloMom's dad loves his car. He regards it as an extension of himself. He digs the whole motel deal, where you can sleep right next to your car, but camping is better, because you can sleep in your car. He goes nowhere without that car, even though he lives in a country with excellent public transport and even better bike paths. He logs the miles. Okay, so Holland is a small place: but that's not where he rakes up the miles. Until CelloMom's mom passed away, they used to be on the road, all over Europe, for a minimum of five weeks a year. In a camper, mostly. By far their biggest vacation expense was gasoline.

Forty years of car travel like that, and not one flat? Either he's improbably lucky, or the roads are just cleaner over there. Or both.