First there was "You can't get there from here", that phrase that country folk love to trot out when a hapless out-of-stater got hopelessly lost in Maine and had to resort asking the natives for the directions. Or so the out-of-staters said.

Then there was the AAA Trip-tik: the set of mini-maps where the friendly AAA representative highlighted the route you were to take to get from A to B. Depending on the trip, you could end up lugging a small library back to your car, of the Trip-tik itself, plus the maps and the AAA guides that went with it. For a cross-country trip we're talking the weight of a small encyclopedia. Then - oh marvel! - there was the GPS device that was built in or (more commonly) precariously attached to your windshield with a suction cup. Super-expensive versions told you the real-time route, accounting for any detours due to road contructions of traffic jams.

But all that is so twentieth century.

Because we all have smartphones now. That hand-held thing that has subsumed the function of a host of large and heavy devices that we used to have to lug around, such as the computer, the phone, the camera, the PDA (remember Palm?), the agenda, the newspapers, the wallet and who knows what else.

Oh right: And the GPS navigator. Using your smartphone, you just enter the address of your destination into Google Maps, turn on the voice directions, and off you go.

Here's the cool thing about Google Maps directions: while they started out as driving directions only, they have gradually expanded the options, which now include directions using public transport, and for walking and biking as well.

So now you can navigate any place like the locals.

Say you're at Google's headquarters in Mountain View, CA, and you want to visit San Francisco's Natural History Museum to admire the fossils and minerals. Google Maps tells you the way, with an estimate of the travel time based on real-time conditions. At the time I queried the map the driving time was about 45 minutes. 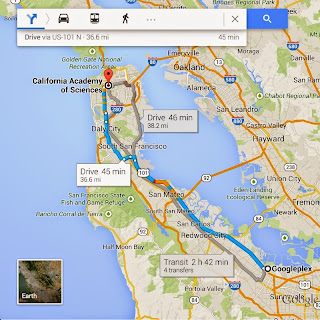 Without my explicitly asking for it, the map also volunteered a route by public transit. This takes nearly three hours, perhaps because there were four changes involved. Public transport in the Bay area is still very fragmented, and often transfers between services seem to be designed for a maximum wait. Which is a stupid way to attract riders.

In places where public transport is well coordinated, or frequent, or both, the scales often tip the other way. Here is one such example: Suppose you've having a holiday on England's south coast, say at the popular Brighton beach, and there's an exhibit at the National Gallery that you must see. 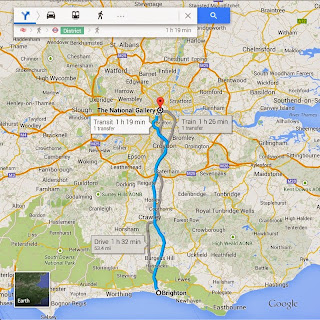 In this map, the default route is that by public transport: You take the Southern Line train into London's Victoria Station where you walk to the Underground station and take the tube to Embankment. The trip takes 79 minutes; there is service every half hour. The map tells you the departure time of the next train.

Taking the car in takes 92 minutes - I assume that doesn't include time spent looking for a parking spot. Not to mention dealing with the congestion charge on private cars, which is £10 ($16) a day. This is a no-brainer, really. If you spend a few days in London, you can buy an Oyster Card which is good for all manner of public transport. That, together with Google Maps, will let you zip around like a native.

I was already impressed that the default route should be the one by train - maybe that's because it's the quickest way - but then found out that in South Korea, Google Maps gives directions for public transit exclusively. Try it for yourself: get the directions, say, to the Seoul Museum of Art from anywhere else in South Korea. The map shows all the roads. But no driving directions.

Google, my friends, is one forward looking company.

You may also like:
1. Why I Love High-Speed Trains
2. How Will You Travel for Thanksgiving?
3. Greening Our Vacation