Why I Love High-Speed Trains

The California High Speed Rail Authority plans to install a network of fast trains, including a trajectory that will carry passengers between San Francisco and Los Angeles (about 400 miles) in less than 3 hours. By 2029.

I can't wait till 2029 - I mean, by then I could be a grandmother! So, having vowed to have a car-free vacation this year, I've booked this summer's family holiday travel on a few fast trains that are already running.

There is a pretty dense network of high speed lines in western Europe (high speed means top speeds of at least 200 kph, or 124 mph), and an equally dense of slower but still fast trains in eastern Europe.

Getting connected from the Dutch corner is still difficult: you have to take Thalys to Paris, then transfer from Gare du Nord to Gare de Lyon to catch the southbound high speed trains, not a trivial task if you're toting luggage at rush hour.

I'm sorry to say that on this trip we managed to miss altogether a ride on France's pioneering TGV (Trains à Grande Vitesse) lines on this trip, opting instead for Trenitalia's older, regular-speed Thello, the overnight service from Paris to Florence. The children particularly enjoyed camping out in a couchette, but to tell the truth this train is ready for an update and/or a facelift. 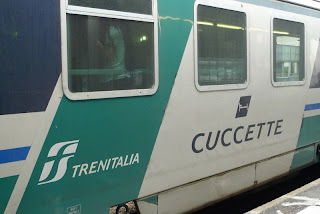 We emerged blinking into the early morning light in Florence, the place to gorge yourself in art, architecture and history, as well as the excellent cuisine. The place really is like one big museum; even the town-centre railway station at Santa Maria Novella has a pleasing esthetic, and is decorated with huge mosaics. 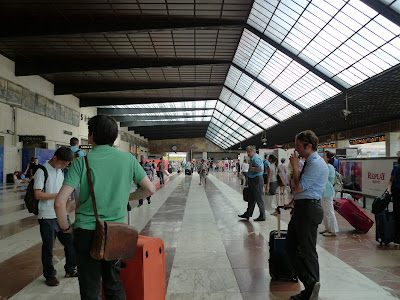 This rather venerable station will soon be joined by a completely new station that is dedicated to Trenitalia's high speed trains, Le Frecce (The Arrows). The stunning design (by Foster & Partners) makes a futuristic apparition of this new station, which is part of an ambitious effort by Trenitalia to build 21st century stations in every major Italian city, adding another layer to its rich architectural history. 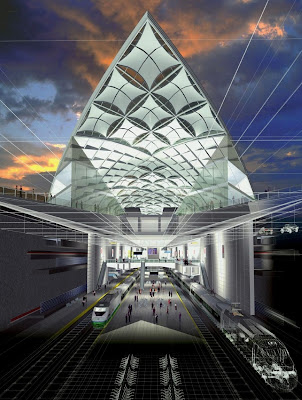 It seems it's the least you can do to give the high speed trains a proper platform, so to speak. These trains, developed by Bombardier Transportation and AnsaldoBreda, top 300 kph (186mph) on the flat Po river delta.

300 kph is fast. It's fast enough to give you a sense of vertigo (if that isn't too much of an oxymoron for horizontal motion). Where the track runs parallel to the Autostrada, the train zips by cars going 120 kph (75mph) on the fast lane. Track-side sunflower fields and vineyards go by in a colourful blur. We've come a long way since the first lumbering locomotives running on coal-powered steam. 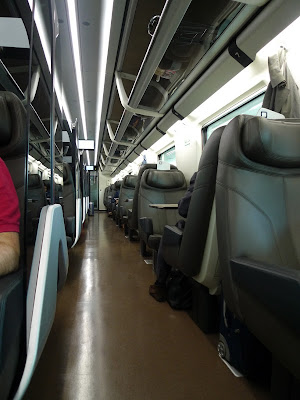 The ride is very comfortable: very stable, and particularly cushy in business class with its wide leather seats (with built-in 220V outlets for your devices), WiFi, drinks and the morning papers (all Italian). Underneath the A-line formed by back-to-back seats there is space for a medium-sized suitcase: no need to heave it onto the overhead storage space.

There is even a quiet car (extremely unpopular with Italian travelers who prefer a social experience). Tickets from Florence to Rome start at €29; even a business class seat starts at €38 if purchased a few days ahead. The FrecciaRossa covers the Rome to Milan segment (600km or 373 miles, the same distance as San Francisco - Los Angeles) in about three hours: there's no better way to cover that distance. Not surprisingly, most Freccia Rossa trains run at near-100% occupation, which helps keep the carbon emissions per passenger-kilometer very low. In short, I find myself quite in love with these Italian fast trains. My only gripe with them (as with all other high speed trains) is that entering or exiting a tunnel makes your ears pop, because the high speed of the train and the size of the tunnel conspire to compress the air in the tunnel significantly. I hope there is a way to re-design the tunnel mouth to minimise this effect.

Once those dedicated train stations are ready, they will be architectural landmarks. Perhaps one reason to build separate stations for the Frecce trains is to inoculate them agains the legendary Italian tardiness on the rail network. But already they keep excellent time.

Of course, for timeliness nothing beats Swiss trains. But Switzerland's mountainous terrain precludes the kind of speeds you can achieve on a flat plain. And that's perhaps just as well: those SBB trains have plenty of tunnels to traverse.

On the other hand, SBB's regular trains have windows that you can slide down to let in the fresh air. Some go down two-thirds of the window's height. Passengers are expected to be smart about not leaning out.

German InterCity Express (ICE) trains do not have windows that can be opened. But they do move: up to 240kph (150mph) on the north-south segment along the Rhine river. These are built by a collaboration between Bombardier and Siemens.

Seats are not over-stuffed, and very comfortable. There is a 220V outlet between each pair. The coolest thing about these Deutsche Bahn trains is the small display above each seat, that shows over what part of the train's journey that particular seat has been reserved. This means that if you come aboard with a ticket but without a reservation, you can easily find a seat that you can occupy for the duration of your travel, without running into the unpleasant surprise that you have to give up the seat of your choice to someone who has reserved it. 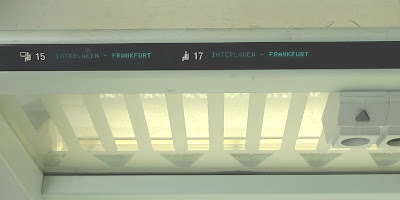 Another, very unpleasant, surprise can come in the shape of a train accident. European trains have been in the news lately when a high-speed train was derailed in Spain, and also because of a head-on collision of two trains in Switzerland.

But while rail and air travel accidents always make the headlines, in fact both are far safer modes of travel than driving a car: For European rail travel, the statistics indicate 0.11 deaths per billion passenger km. Compare that to automobile accidents in the US, which account for 15.9 deaths per vehicle km, more than a hundred times higher fatality rate than for European rail.

These statistics are counted over large populations. In my personal case, heading as I am toward menopause, I have lately been often sleep deprived, easily distracted, and frankly rather accident prone in many small ways. I figure that right now my family is much less safe in a car with me behind the wheel, than in a train driven by a professional conductor. So I'll happily keep booking us on trains. Until better days.

The other truth is that I rather enjoy a break from the driver's seat. I like the luxurious feeling of being ferried about, I love being able to take in the surroundings, even if it whizzes by at 300 kph. Not to mention playing games with the children, reading a book, or getting something to eat in the cafe car. All that, at average speed significantly higher than what I can safely get in a car, and at far smaller carbon footprint than taking an airplane. At intermediate distances, high-speed rail is the obvious way to go. I'm hooked.