This summer, we made a new friend: Jasmin is a warm-hearted, many-sided person with a sunny disposition, and quite without fear. She currently lives in Prague, but her life story spans three continents. She speaks three or four languages fluently, and will engage in a lively conversation about almost any subject you care to bring up, in several languages at once if necessary.

Jasmin had made the trek from the Czech Republic to the Netherlands, accompanied by her diminutive shih-tzu puppy Gracie, in Jasmin's Škoda Roomster, stopping here and there on the way to visit Jasmin's many friends. The Roomster is a worthy match to Jasmin: it also is versatile, up for anything, and offers plenty of room inside for friends. With its slightly raised seats it embraces you with an easy welcome. In the front, the wraparound windows give you a good view around. Children rejoice: in the back, the windows are actually taller than in the front, defiantly going against the current trend of the disappearing side window. 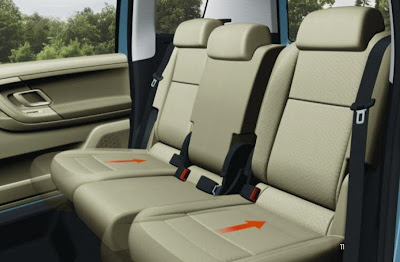 Not only that, in the Roomster's "VarioFlex" seating arrangement all three seats in the back row can be moved forward and backward independently: if you're trying to fit three child seats in the back row, this might make all the difference between success and having to buy a big minivan to accomodate your third child.

Flipping down the back of the middle seat allows the safe transport of a cello. Removing the middle seat altogether makes space for street gear like a skateboard. Removing one or both side seats allows you to carry one of more adult bicycles. Toss out all the back seats and the rear of the car becomes one cavernous cargo space for transporting whatever is important to you. 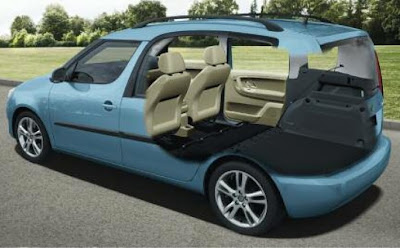 Jasmin kindly let me take a spin in her Roomster. The car had nimble handling (parking in Holland's tiny parking spots no problem), its five-speed gear box was pleasingly smooth, and its 1.2L gasoline engine (with less than 70HP - it was a few years old) did very well in city traffic among the vigorous-driving Dutch. It also carried Jasmin and her puppy on the German Autobahn just fine. The only change Jasmin would like to see in her car is improved fuel consumption.

Indeed, the 33 mpg reported by German drivers is distinctly underwhelming for a 1.2L engine - but that might have to do with the German driving style. British drivers report an average of 37 mpg. Of course, opting for a turbodiesel engine can get you a much larger improvement: in fact, the 1.2L TDI engine in the GreenLine II Roomster averages 46 mpg even when driven by Germans: that's more like it.

If I were the owner of a small business: a baker, say, or a florist, this versatile car could be my carry-all vehicle, inside and outside working hours. Its low price, and low fuel consumption, is friendly both to small businesses and families. It would be more than fine for a family of four with one or two cellos.

You may also like:
1. Fitting Three Children on Your Car's Back Seat