The land area that comprises the Netherlands is partly a gift from the rivers of which is forms the delta, and partly hard-won from the sea, through the building of dikes, poldering, and the incessant pumping of water (you didn't think all those classic Dutch windmills were built to be pretty, did you?).

Half of the place is below the current sea level (-6.76m at the lowest point), and the Dutch think it's reasonable - indeed, prudent - to spend 1-2 billion euros per year to shore up their defenses agains rising sea levels, in a nationwide multi-decade plan called the Deltaprogramma.

Nobody here has time for climate change denial: global warming is treated as a given. This perspective pervades news coverage, discussions at talk shows, and education. For instance, the map below was developed by Red Geographics for use in schools. Dark blue areas indicate regions currently below sea level; light blue shows regions at risk at a sea level rise up to 7 meters (23 ft). 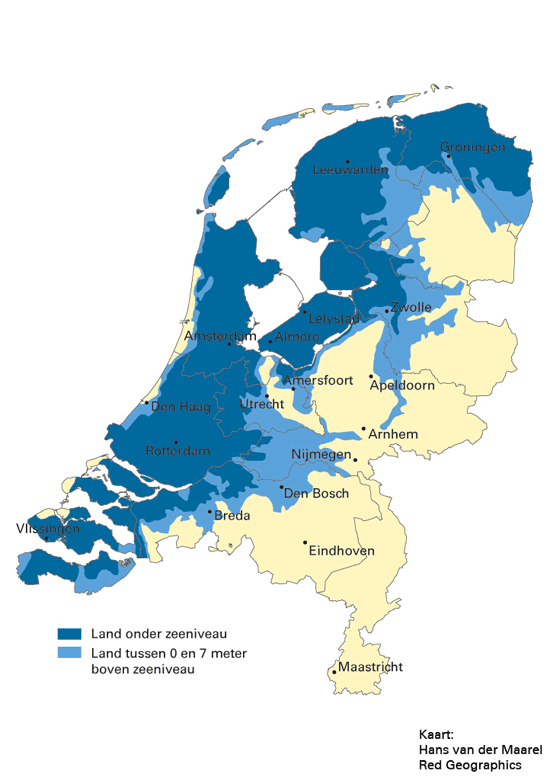 Don't get me wrong: I'm not saying the Dutch are environmental saints. Sure, they bike. But they've got their own western-sized footprint. Shell (which started out as Royal Dutch Oil) is still a large employer. They drive more than they need to. They still get less energy from wind than they should, considering how much wind they have at their disposal. But at least global warming is firmly acknowledged as a reality in the national discussion.

I have just discovered a young-adult book by Evert Hartman, Niemand houdt mij tegen (Nobody can stop me). This is an adventure in the 22nd century, when half of the Netherlands has turned into sea, the remaining population is squeezed on the remaining land area, and immigration is a serious issue.

Sixteen year old Richard is present at the arrest of two Belgian girls, who have entered the Netherlands illegally. He decides to help them, together with Wesley, who is a clone. Hartman foresees self-driving cars that navigate a network of tunnels. Below a partial translation of the chilling opening pages. Hartman wrote this novel in 1991.

It hadn't made any difference.

The raising of dikes, the enforcement of sea barriers, desperate measures by the Department of Water Management to save the dunes - it had all been for nothing. The oceans' levels had risen with a speed that no-one had thought possible.

People fought to preserve the land, but in 2076 an innocent-looking westerly storm unexpectedly grew into a hurricane. The head of North Holland was submerged, the Wadden Islands were nearly destroyed by erosion, and chunks of the provinces of Friesland and Groningen disappeared into the waves.

In a panic, the population fled to higher-lying ground. Thousands perished.

Exactly fifteen years later saw nearly the same sequence of events. The only difference was that this time the storm came from the northwest. At the coast of South-Holland and Zeeland the sea was whipped into a wall of water: the Delta dams built in the twentieth century were run over as if they didn't even exist.

People screamed for countermeasures. Those were put in place: billions were poured into the further raising of dikes and the reinforcements of sea barriers.

All in vain. The sea kept rising; a new storm flood washed over the Afsluitdijk [the nation's longest dike, connecting the provinces of North Holland and Friesland] and turned the low-lying land into a sea. The centre of government was moved post-haste from The Hague to Amersfoort. There, at their wits' end, they arrived at the unavoidable: evacuation of the west and north of the country, and the construction of dikes farther inland, all within five years.

Some resigned themselves to that decision, others protested angrily: The government had been far too late with its measures; they should have done much more about that damned hothouse effect; they should have put the preservation of low-lying Netherlands at top priority above all else; moving within five years was completely impossible! They were going to ignore the government decree, and staying.

This was followed by a period of unimaginable chaos, in which police and army were finally deployed to evacuate all of Holland and low-lying Utrecht. What remained was a landscape dotted with dead towns and cities. With one unique exception: Rotterdam.

[The city of Rotterdam had made its move after the first storm in 2076 and built an enormous sea wall around an area of seven by ten kilometers. They moved their harbours onto new islands. On the other hand, the denizens of Amsterdam decided to move their city physically, at exorbitant material and labour cost, stone by stone: canals, harbour and all, to the higher-lying Staphorst].

When all was done, in 2136, the new Amsterdam lay, just as it did before, three to four meters below sea level.

But by then the polders in the west had been turned into sea. By then all that remained of the dunes was a sand bar.