The travel bureaus that put Jack Kerouac on the road

I may be the most reluctant automotive writer you've ever met, but I'm still an automotive writer, so it's sort of embarrassing that I've never read the quintessential book on autos and motion, "On The Road", Jack Kerouac's paean to high-speed road travel, women and jazz, that marked and inspired the bohemian hedonism of the Beat generation. So I'm reading it now.

I really can get into (or, as the book would say, I "dig") the rejection of materialism, but I can't say I dig the need for speed, the zipping by countless breathlessly beautiful places this country has to offer those who take the time to really explore. All of that natural beauty is just filler material between the cities with their jazz bars and philosophising friends, something to be got through as quickly as possible.

Because all the characters in the book are living from hand to mouth, even a ride on the Greyhound bus is too much of an expense: they hitch rides if they have to, but their preferred way of getting from place to place is by sharing the drive in a private car. 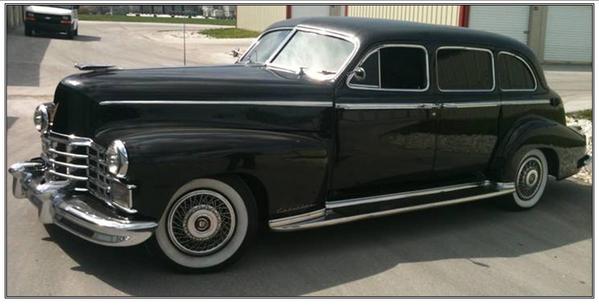 And what cars these are! The most memorable ones are detailed by Dennis Mansker. The photo above is of a 1947 Cadillac limousine, the kind that in the book was whipped from Denver to Chicago (nearly 1200 miles) in seventeen hours, at the end of which it was delivered to its owner's swanky residence, all dented, covered in mud and with the speedometer busted after the first time it was forced past 110mph.

The Cadillac's owner had apparently opted to take the train from Denver to Chicago, and left his car in the care of a "travel bureau". In those days right after World War II, there were travel bureaus in most major cities that matched cars that needed to be driven somewhere with drivers who needed transportation.

They also helped drivers find passengers to share the drive and the cost: it was more efficient than trying to find hitchhikers who were willing to pay for part of the gas. The bureaus also did some (perfunctory) background checks on the drivers. It was a great idea for a nation that had rail coverage, but not enough, and where air travel was still the domain of the super rich.

The travel bureaus were perfect for those who wanted to travel but were penniless - or rather, who got the tank filled before getting their own bellies filled.

Here is a fascinating snippet from the classifieds page of the San Bernardino County Sun, on 20 April 1940, all ads under the heading "Travel Opportunities":

This is from 1940, the year before the attack on Pearl Harbor. Phone numbers had five digits. African Americans still called themselves "negroes". And you could traverse the country by bus - twice - for less than $70. You could also go to a travel bureau and wait - sometimes for a few days - for the car going in the right direction. You never knew with whom you would share that car, but I suspect most of them were not as deranged as Dean Moriarty, nor as unsafe.

Today, we don't need travel bureaus: we have the internet! There are lots of virtual travel bureaus that match empty seats with passengers, especially for the commuter ride, for instance, 511 for the San Franciso area, and Commuter Page for Washington DC. This saves stress, gas money, parking fees, and carbon emissions. There are also car sharing services where you can rent a private car for a day or a few hours.

Much like Sal Paradise's itinerary around the 1940s United States, what goes around comes around. Only with changes.

You may also like:
1. What the NASCAR-winning Hudson Hornet and my VW Golf have in common.
2. Review: BMW 1 Series