What the NASCAR-winning Hudson Hornet and my VW Golf have in common.

I didn't know who or what the Hudson Hornet was, until I saw the movie Cars, where the gruff Doc Hudson plays mentor to the eager young racer Lightning McQueen. Lightning discovers that the sedate old Doc, now the village doctor, once had an illustrious career as the multiple winner of the coveted Piston Cup. 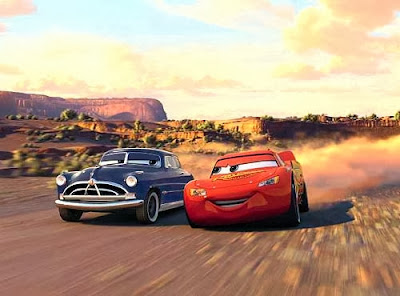 The car on which the character of Doc Hudson was modeled was even more illustrious than its screen persona. It was a powerhouse. It was a multiple winner of the NASCAR races, and I mean mega-multiple: The Hudson Hornet won 27 of the 34 NASCAR Grand National races in 1952, plus 22 wins in 37 races in 1953, and 17 of the 37 races in 1954. A serious track record.

Look at it: more than half the length of this car was dedicated to the engine compartment. Its engine was a six-cylinder in-line titan with a total volume of 308 cubic inches, which is also known as 5.0 Liters, the largest 6-cylinder engine in its time. This thing was an icon of power and speed. Vroom!

Its giant engine generated power of 145HP and a torque of 257 lb-ft, and roared the Hornet on, at speeds up to 85 mph. It could be coaxed to 112 mph when tinkered up for stock car racing. No-one would dare ask the fuel efficiency of a car of such prowess, but it did around 10 mpg.

I'm sorry to disappoint you, it's not the pretty blue Porsche of the Cars movie (I couldn't move two cellos around in that, could I?). It's a 2012 Volkswagen Golf with a turbodiesel engine. And no, the ride is not as cushy as that in a Hornet, which was a luxury car. I mean, an electric clock was standard. For one, my car is quite a bit smaller than the Hudson Hornet - in all three directions. But it is brave anyway. Its predecessor, a 2001 Golf, cheerfully carried two parents, a toddler and a baby in their car seats, plus one grandparent (it was the era before cellos). With the back seat down, it can carry a few hay bales, and once, memorably, two bales of rare 20-inch fiberglass wall insulation.

Our current Golf will carry two adults, two older children, and two cellos. If that isn't brave I don't know what is.

So there you have it: under its diminuitive hood, my Golf harbours the same power as the NASCAR super-winning Hudson Hornet.

But because it's lighter, my Golf will accelerate faster: 0-100 kph in 8.6 seconds, compared to the Hornet's 13.9 seconds. In a race, my Golf will be quicker off the start line, and once going, can get up to 134mph. After all, it was built for the German Autobahn. I don't know that a Golf has ever participated in a NASCAR race. I do know that, if pressed, it could leave the Hornet in the dust.

All this is not to brag what my car could do at NASCAR, but rather to show that it has way too much under the hood. Anyway, what would a cello-toting mom do with a NASCAR-ready car? The full-sized cello is rented: I need to return that in one piece. The 3/4 cello is now mine, so if anything I'm even more careful with that.

My car licks the Hudson Hornet in another way: its fuel efficiency is nearly four times higher than the Hornet's. This is all due to the progress on the technology of internal combustion engines. But that progress has not ended. Europeans are moving to smaller and smarter engines and getting better fuel efficiency than Americans, who have been staying with large engines for decades.

One version of my Golf, which you and I can't buy here, is the 1.6L TDI with BlueMotion efficiency enhancing technology. It has a 1.6L turbodiesel engine, 20% smaller than the 2.0L in my car. But that smaller engine (105HP) still allows acceleration 0-100kph in 10.7 seconds, and still takes the car to 119 mph which is rather more than the speed limit on most US highways. Even that wimpier version of the Golf would still beat the Hudson Hornet.

On the other hand, the fuel efficiency of the 1.6L TDI is around 49mpg, and its German price tag is € 2,575 ($ 3,550) lower than that for the 2.0L TDI. There is no question in my mind: I'd rather drive this 1.6L TDI than my current 2.0L TDI. Its smaller carbon footprint is better for the planet, and its smaller price tag and higher efficiency is better for my budget.

I don't need a car that could be in a NASCAR race. And neither do you, despite car manufacturers' earnest attempts to make you think you do. So next time you need to buy a car, why not ask how much horsepower you really need?

See my post on horsepower to do the estimate. Spoiler: to drive a car the size of a Toyota Camry on the US Insterstate highway system at 65mph, you need about 76 HP. Go ahead, check my math.


You may also like:
1. Carbon Tax is an Effective Tool to Reduce Cars' Emissions
2. What's so clean about diesel?