My brother had a housemate named Gregory, a gentle giant whose heart is even larger than his person. Gregory's three small dogs (named "The Pack" by my children) eat better than many people on a junk food diet, since their owner can't abide by bad food; not even for dogs. Gregory would treat us to amazing food that looks as beautifiul as it tastes, the whole complemented by his flower arrangements: he is an ikebana master as well as an outstanding cook.

I suspect my children think of him in some way every time they put some flowers in a vase or dig up the moss in our yard for stuffing into a hollow brick, perhaps with some maple blossoms. They loved going to the farmers' market with Gregory, who made us all laugh by legging it, from the flower stands to the organic vegetables, from the bakers to the local cheese makers, all the while making plans for dinner and the next ikebana class he's teaching. 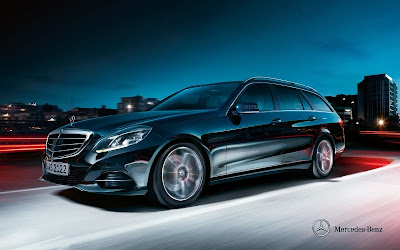 For moving friends, food and flowers, Gregory drives a Mercedes E wagon. It moves like a tank, but inside it gives a ride gentle enough for a baby, a delicate dessert, or the array of Japanese flower pots that Gregory needs to move when he has a show. His dogs ride in the back then they go to the park, and there's plenty of room for my brother's dog as well. 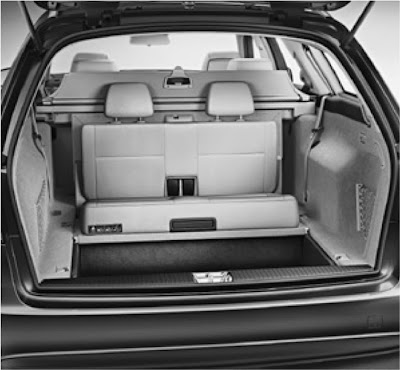 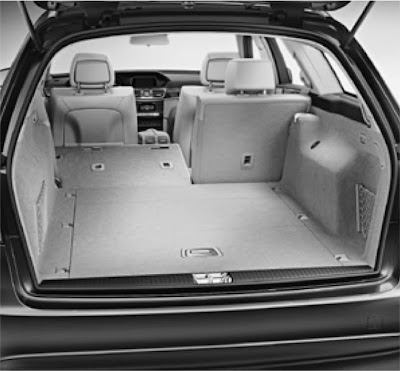 My children much preferred Gregory's car over my brother's Prius, mostly for the two extra seats that pop up in the cargo space, with a shallow well for legspace. They had their own private space with a great view out of the back window and not too much interference from the grownups in the two forward facing rows.

In the US, the E-Class Wagon is available with the 3.5L V6 engine, with 4MATIC all-wheel drive. Let us not speak of the E63 AMG, with its 5.5L V8 engine: I thought such engines had gone the way of the dinosaours in the late 1970s; they have no place in the carbon-conscious 21st century.

Let's rather take a look at the German site of the E-Klasse T-Modell. People who drive this car tend to be sartorially gifted, and if you select your clothes with as much care as they do, why not lavish care on the choice of your car? The brochure (download via this page) is a demonstration that true choice still exists, if you know where to look for it.

Mercedes-Benz offers the E-Class Wagon in six different diesel types and ten gasoline types: this is choice. Of these sixteen variants, six have 4MATIC all wheel drive, and four of the diesels have Mercedes' BlueTEC catalytic exhaust scrubbing technology.

And one is a sweet diesel hybrid with fuel efficiency specified as 53 mpg (see table below).

The Wagon is available in basic trim, Elegance and AvantGarde. Of course, you can get it in any colour you want, including ones that aren't on the Mercedes palette. In Europe, you can choose a standard or a panoramic sliding roof (check it out here: click on the "Panorama-Schiebedach" option).

But beyond the wheels (13 choices, ranging from sturdy to cathedral window), the customer specifies the car to the last detail, including the colour of the ceiling, leather on the pop-up seats in the back, and whether you want aluminum or walnut decorative elements in the interior. Not to mention a plethora of on-board entertainment options, including the cool Bang & Olufsen BeoSound system.

There is the memory feature, that remembers personal settings for front seats, mirrors and such, for up to three different drivers. This is great if you frequently share the car with drivers whose physiques are different from your own.

The sixteen in the E-Class lineup includes the E350 4MATIC: it is rated a "C" in the EURO5 efficiency classification. Of the ten gasoline versions, only two are rated "B" or better. The E63 AMG is unapologetically rated "F". To highlight its dinosaur status.

The diesels are rated "A", except the E350 4MATIC which is rated "B" under the stricter EURO6 schedule, and the E300 BlueTEC Hybrid which is rated "A+". Even that one can reach speeds up to 144mph.

Diesel hybrids are still rare, but are obviously the way to go for minimising carbon emissions in a car running on fossil fuels. The only way to better that is to go the way of the Volvo V60 plug-in diesel hybrid.