Here is a moderately sized MPV with plenty of space, a panoramic view, and outfitted with a range of engines that get up to 42mpg in real life: what's not to love? Visit the Citroën website: here is a place that is decidedly different from most auto websites in the US. The feel of it is just different. Once your stunned eyes have adjusted to its aesthetic, hover your mouse over the menu item that says "Véhicules" and find the C4 Picasso. Among the current fleet of cars that sink into vanilla anonymity in their drive to resemble one another, this is a car that is distinctive! You can spot it a mile away.

Those who make snide remarks about how Toyota Prius resembles an egg have never seen the Citroën Picasso. Before they put on that overhang in the back, the Picasso really looked like an egg. But don't snicker before you've actually had a chance to climb into one: the panoramic windows, which continue on the roof (!), are a revelation.

Two summers ago, CelloMom decided to take the children on a camping trip in France. CelloDad, who likes the room service kind of holiday, stayed behind, but grandpa, who adores camping, came along. It was a last-minute thing, so CelloMom went to the car rental in Holland and asked for something that would fit four people plus camping gear. What she got was the slightly larger version of the Picasso, the Citroën C4 Grand Picasso, longer by nearly 9 inches and taller at the back, and not nearly so egg-like in shape (pity). There was an optional third row of seats but we kept that folded down to make space for the gear.

The windscreen is enormous. As you sit behind the wheel, its top edge is out of your field of view. The side windows continue to the very front corners, so you get the feeling of driving in a bubble.

The children loved the big windows in the back. Too many cars have rears which are squished for the sake of aerodynamics, and the windows in the back row really suffer from it. Not so in the Picasso: the windows, even in the back, start low enough that a child can look out without that nose-on-the-glass trick. And they go up. Way up. And continue on the roof. That roof window really bailed us out on more than one occasion, because the children were able to see the road signs and provided excellent navigation services from the back seat while grandpa, who had forgotten to bring his reading glasses, was still squinting at his map.

At 4.59 metre length (181 in) this was not your lumbering US-style MPV: parking in old French towns with narrow stone-paved streets was no problem. But inside, there was plenty of space to be comfortable for long drives. We traveled west through Normandy and Bretagne, eating like sultans between the fossil hunting, church viewing and beach visits. At most campsites, the check-in routine included putting in an order for baguettes and croissants which would arrive the next morning, fresh from the local bakery and still warm. A civilised way to camp!

CelloMom and the children would retire in the tent, and grandpa would install himself in the car: you can fold down the second row of chairs to make a cavernous flat-floor place to spread out a sleeping bag, and watch the stars in warmth and comfiness.

The rental Grand Picasso came with an automatic transmission. While CelloMom usually prefers a manual transmission, in this case the clever EGS (Electronic Gearbox System) actually delivered slightly better fuel economy than the manual transmission (see table below), partly because the automatic version has a turbo-booster. The gasoline version gets an official fuel efficiency of 6.9 L/100km (34 mpg) for the manual version, and 6.7 L/100km (35 mpg) for the automatic. The latter's 156HP was more than enough to negotiate the hilly country in Bretagne with a full load. The similarly-sized diesel engine gets 48 mpg officially, 42mpg in real life. 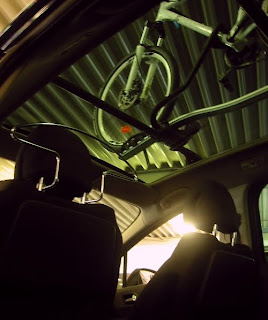 So then: seats for up to 7 passengers, amazing view, space for grandpa to stretch out (never mind the cello), 42mpg - What's not to love? Well, unlike the Opel Meriva, the Grand Picasso doesn't have a built-in bicycle carrier. Then again, it has a roof-length rail ready to receive a bike rack. CelloMom went to a Peugeot dealer and sat in a Peugeot 5008, which shares the Picasso's platform, and was impressed by the way you can keep an eye on your bike even as you're zipping along the highway. (The demo bike in the photo is, of course, a Peugeot). Allright, then, perhaps one doesn't need a built-in bike rack.

In the UK, the brand is pronounced "citron", even though the name in French has three syllables. Without the umlaut on the e, you get the Dutch word for "lemon". Perhaps it is the unfortunate name that has kept this brand mostly inside Europe. But make no mistake: the Grand Picasso is no lemon. It is, on the contrary, a highly desirable family car, versatile, fun to drive, and best of all: gas-frugal.