Allow me to gush. CelloMom is enchanted. Enamoured. Allright: smitten. Swept off her feet to end up behind the wheel of a new Opel Meriva. Or so she would wish. Because this car is not available in the US at all, not in any version, despite the fact that Opel, the venerable German carmaker, is now a wholly owned subsidiary of GM. (In the UK, Opel cars are sold under the brand name Vauxhall and come with the steering wheel on the right hand side of the car).

This baby is labeled a "mini-MPV", and with a length of 4.288m (169in) it's about the same length as a VW Golf, or 2-3 feet shorter than the regular US MPV like a Toyota Sienna. It also only has two rows of seats for 5 people. However, the rear seat row is extremely versatile; it is a simple operation to tuck in the middle seat, after which the remaining two seats can be moved independently of each other in both the forward/backward as well as the lateral directions. Once the middle seat is down, a cello can be placed there, with the neck between the other two seats and sticking into the trunk space.

The trunk itself offers a good amount of space (a cello would fit in it in case you need to move 5 people in the car), and the rear seats fold down completely to make a flat-floor cargo space for moving large items from the Ikea or the hardware store. This is why CelloMom likes hatchbacks so much: she still hasn't outgrown the graduate student notion that you never get anything delivered if, instead, you can break your back lugging it yourself. The Meriva's rear hatch opens all the way down to the cargo floor level so you don't have to lift your large items over a threshold, making loading and unloading easy for the vertically challenged. This is made even easier by the unusual rear side doors, which have their hinges toward the rear of the car. That is the right direction when you're standing by the door pulling at a large object that someone else is pushing in through the hatch, or loading toddlers and their various paraphernalia into the child seat.

The 2011 Meriva is too new for actual fuel use to be posted, but comparing it to the other data on the Honest John site (look under Vauxhall), CelloMom would estimate a real-life mileage of 34-36mpg for the 1.4L gasoline version. Switching to a turbocharged 1.3L diesel engine would get you close to 50mpg. Sweet.

This cake has a two-part icing: first, the seats are higher than in most cars, but not as high as in many MPVs; in fact, CelloMom finds it very comfortable to get in and out without climbing. It's nice to get that little bit more of a view of the road. The other piece of the icing is that CelloMom's purse, which so far has had to eke out a precarious existence on the passenger seat, or on the handbrake, or (least safe of all) by the feet, is now finally offered a good home in the very flexible storage between the two front seats. 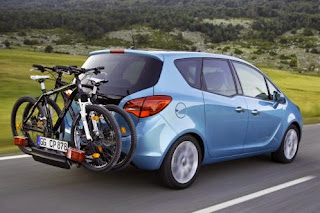 But what really stole CelloMom's heart, the cherry on the icing on the cake, is that you can reach underneath the rear hatch, and pull out a built-in bicycle carrier good for two adult bikes. I saw a Meriva zipping down the highway today carrying two bikes like that; the bike rack was solid, no wobble at all: love that German engineering. Bring it on. If this car were for sale in the US, CelloMom would buy it. Check out the dedicated minisite in German or in English to view the very cute promotional video.
*Bicycle rack photo from the German car portal, auto.de. Click on photo to read original article.

Many thanks to Ferdi van der Gaag at Het Motorhuis in Delft for answering my questions and giving demos on various features of Opel cars.
Posted by CelloMom at 10:53 AM