Climate Change and the Ministry of Truth

I went to check out Fox News. 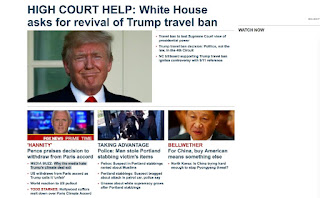 What climate change? What Paris agreement?

Like the Ministry of Truth from "1984", George Orwell's novel on a dystopian and totalitarian state, Fox News has scrubbed climate change from its feed. Never mind that climate change has been described, by the US military and US security bodies, as the country's largest security threat.

You can't, however, accuse Fox of not covering the Paris exit at all. If you look closely, you will see a tiny headline: "Why the media hate Trump's climate deal exit".

This is entirely consistent with the propaganda that the White House has been disseminating about climate change. First and foremost: it's not important. Secondly: it's something cooked up by liberals, and especially the liberal media, who in this narrative are the enemy of state.

(About that: it may be true that the liberal media is the enemy, not of the state, but of the White House. And maybe they have good reasons).

The liberal media has pounced on Trump's speech announcing the US exit from the Paris agreement: It's full of lies and inaccuracies. It's short sighted. It's giving up US world leadership to China. On and on.

But there is one thing the liberal media is missing, in its haste to bash Trump: That speech is not directed at the world. It is directed almost exclusively at the Trump base.

Go and re-read it (or re-watch it) with that in mind. The Paris agreement is described as a "deal" - which it's not - that is bad for America, and Trump makes - so he says - only the best deals for America. An MIT team is quoted as saying humans cause at most 0.2C warming anyway - the MIT team is said to be apoplectic about that quote, but the correction certainly won't make it into Fox News.

Ignoring the fact that India has started to axe plans for coal power expansion, Trump emphasizes how "unfair" Indian coal use would be to American workers. In general, he goes on about how the Paris agreement would hurt American workers. Speaking directly to those American workers who voted for him. Who are hurting.

The president of the United States stages this speech, after prolonged teasing (just like in a game show), on the world's most prominent stage, the Rose Garden. For the benefit of the people who he hopes will vote for him again in 2020, he says that climate change is not a big deal, and that the rest of the world is trying to use it to beat down the United States. And its workers.

It would be inconvenient for that demographic to hear the truth: that they would hurt less with the Paris agreement than without it. And that's why it is carefully edited out of the news that they hear.

THIS is the scandal that has remained under the radar. Scientists and outlets like PolitiFact go assiduously "debunking" the lies and inaccuracies in Trump's speech. They are right, strictly speaking. But they're barking up the wrong tree. By debunking the myths, they are talking about the myths, and thereby re-inforcing them.

Say about Fox News what you want, but they are doing propaganda the right way: by deleting all mention of climate change, they are deleting climate change from the consciousness of their audience.

This is why Trump voters don't think climate change is a problem. This is why support for Trump is still very high among Trump voters: they are not getting the news that readers of the liberal media are getting. Our media silos are frighteningly good at dividing us.

By the way, I don't mean to bash on Fox alone: this morning, the online front page of the Wall St Journal has nothing on the Paris exit "above the fold", that is, the bit that shows up on your screen first. But if you scroll down, you will see a headline, "US States defy Trump's climate pact withdrawal". And below that, "US Climate pivot puts a reluctant China in driver's seat".

Really? A roundup of the reaction inside China shows barely contained glee, and a rubbing of hands at the bright - I'd say "sunny" - outlook for the Chinese economy, and its standing in the world.

What is really required is to call out outlets like Fox, WSJ, Breitbart et al. on being part of a propaganda machine, and to call out their paymasters.

Some of those paymasters are okay with the spreading of fake news, as it benefits their industry. That would be mostly the fossil fuel industry and other extractive corporations. And some are not okay with that, but may not realise that their advertising money is helping the spread of fake news.

You - yes you, dear reader - can help to make cracks in the media silos by drawing the attention of neutral or pro-climate advertisers to the fact that their advertising is supporting a news outlet that either promotes fake news, or suppresses real news. The organisation Sleeping Giants has been coordinating an effort to let advertisers know if their ads appear next to some hateful alt-right piece in Breitbart, and the effort has been effective.

Go ahead. Troll the climate denier outlets. You may find it hard to read their stuff, but that's the point of doing this: that you know the opponent, and that you not retreat into your own silo.

Besides, the biggest enemy of climate action, by far, is silence.