In the United States of the late 20th century and the beginning of the 21st, the car is ubiquitous. It dominates the roads. It makes its presence known. We know its speed, its smell, its size.

And that is why the car is used as a yard stick to measure things by. In a disaster, the car is used to convey the scale of that disaster in terms most people can understand. Think of the image of the yellow taxis in New Jersey, submerged in muddy water halfway up the windows following superstorm Sandy.

The coronavirus pandemic has brought lockdowns, and the lockdowns have brought traffic to a halt all over the planet. People are gushing over the long-range views, the blue sky - "Positively Alpine!" -in places that usually choke in deadly air pollution, the silent killer we have learned to live alongside, more of less successfully ignoring its fatal effects.

The absence of the car is disconcerting, gives freeways and thoroughfares a funereal, apocalyptic feel. Instead, we find the car re-arranged in new formations.

On April 9, 2020, the San Antonio Express News published an article on the line that formed at the San Antonio Food Bank. In the old days, breadlines were lines of people. The scale was human, and this is what made an impression. But the bread line of 2020 is a line of cars.

People queued up in their cars to preserve the physical distancing that limiting the spread of the virus called for. In San Antonio there were 10,000 cars lined up, its drivers waiting for hours to receive food after they had been laid off in the vast shuttering that had taken place throughout the country. 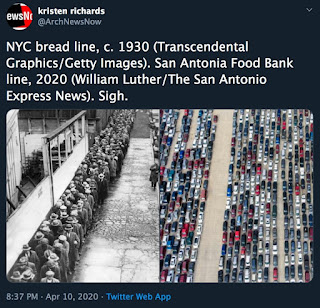 The number 10,000 is just a number. But an aerial photo of the cars, lined up in orderly rows, brings home just how many people were collecting that donation of food, on that hot day in Texas.

And I wonder what happened to the people who needed food but didn't have a car.

You may also like:
1. Measuring Loss in Terms of Human Suffering, Not Dollars
2. How to buy a gas sipper for less
3. Extreme weather and the migration of drivers' licences