Why Bicycle Riding Is Good For Democracy

"Which way shall we go?" says CelloDad.

There's no question where we're headed: to the Market Square in Delft, the Netherlands, which hosts the City Hall where we were married all those years ago. But today we were headed to have pancakes at one of Delft's many find establishments.

When we borrowed my dad's car, we would not have sweated the question. I would be at the wheel, and we went however I decided to go, and that was that.

But we're on bike, and that changes everything. 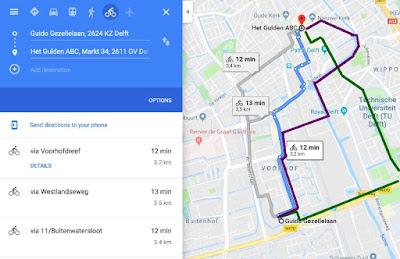 From my dad's place, it takes less time to reach the market square by bike than by car, and you don't have to pay the horrendous parking fees. But it takes negotiation, because there are lots of ways to reach downtown by bike.

We could go the straight and boring route, all business like; that would be the preferred route marked in blue on a "bike directions" option google map. We could, in principle, go the fast biker's route alongside the highway, marked in gray. But we don't. I'm not that kind of rider.

We could go over the campus of the University of Technology, for old time's sake (the green route). It's more attractive now that the main campus has been pedestrianised, and we can gawk at our old haunts without the risk of being taken down by a car. 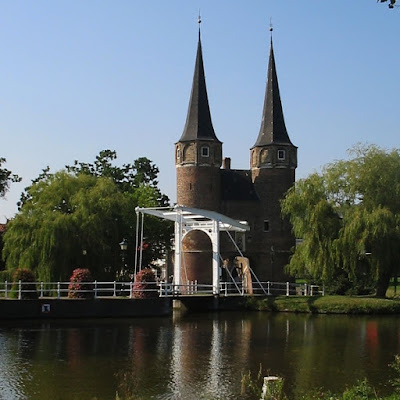 My currently favourite route is a bit aroundabout but showcases the town well, passing by a number of canals, and through the Oostpoort made famous by the painter Vermeer. CelloDad has his own preferred route. Our preferences change with the weather and with how much time we got. This is why we need to negotiate. Also where to park our bikes when we get there: I like to put it as close as possible to my destination, my love doesn't mind walking a bit.

And we do this every time we go out. I was getting more than a little annoyed by it, until I realised that this is one manifestation of democracy at work: you get good at negotiating a route that everyone can live with (when our children are in the mix the conversation gets longer!). You must come to some kind of agreement, simply because every person in the party has their own steering bar. It is this very autonomy of the individual that makes consensus essential, if only to avoid getting your handlebars tangled if one goes straight while the other one is trying to make a turn.

The Dutch, I must say, are very good at achieving consensus. It takes an inordinate amount of yakking, but Dutch "polder politics" is famous for arriving at consensus among parties that one would expect to be at loggerheads. For instance, the Dutch government has in several periods been one of a "purple" coalition between labour and conservatives.

Plotting our route to go downtown is a microcosm of that. At the end of my dad's street, should we go left or go right? We always have that conversation, and in the end, we always end up happily eating a pancake together.

You may also like:
1. Urban Design and Traffic
2. The Netherlands: Bike-Friendly By Law
3. How the Dutch got their Bicycle Paths