Dutch public transit services went on strike today over a disagreement on the retirement age (which is set to rise to 67 years and then to track the life expentancy).

And this is how you find out just how good the Dutch public transit is: when it gets taken away for a day. A million people (out of a population of 17 million) depend on it to get to work or school. It is used by a broad section of Dutch residents (unlike in the United States where, outside a few coastal cities, trains and buses are occupied mostly by the poor and by hapless foreigners). 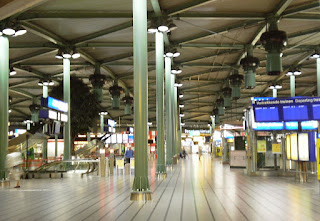 As one example: Arriving at Schiphol airport generally involves going through immigration, picking up your luggage, and rolling it straight downstairs to the train tracks: the railway station is an integral part of the airport. On weekdays it's serviced by 25 trains per hour.

It's no wonder that the union action struck fear and panic among the operators at Schiphol. If all their passengers arrived or left by car it would be total chaos. They sued for retention of train service. A judge granted the exception, and today air travelers can expect 4 trains every hour at Schiphol.

Even so, the airport saw gridlock. Elsewhere, roads and parking garages were full of cars, they way they used to be in the 1970s. On the other hand, this is the opportunity for photographers to capture empty bus and train stations. Empty and moored ferries too, since those are part of the public transport system. (Find more photos under the hashtag #ovstaking)

Here's a picture of the turnstiles at Rotterdam station, which generally crawling with people:

For more local transport, lots of people took the bike. Amsterdam opted to open the tunnel under the river IJ to bike riders rather than invite the unbearable gridlock that would happen if they all came into town in their cars:

Despite the inconvenience, the Dutch public mostly supports the union's demands for retirement provisions. In many cases they simply stay home from work (when you have at least four weeks of vacation a year you can take a day off). They take the bike. They re-schedule non-emergency appointments.

Because why get stuck in car traffic? About 700km (430 miles) of highways saw congestion around rush hour today. And tomorrow everyone will breathe a sign of relief as service is resumed. 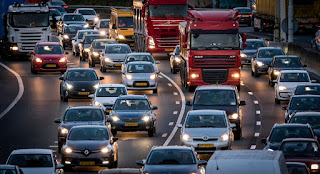 While this is an eminently Dutch story, forward looking cities, even in the United States, are waking up to the potential of public transit to support smart growth that comes without painful congestion. Just look at Seattle's success in getting people out of driving to work alone.

UPDATE at end of day:

Train stations were indeed completely empty all day, except for the region around Schiphol airport. Here is a rare photo of Amsterdam Central Station without people at 5.30, usually the peak of rush hour.

A lot of Dutch people have re-discovered the pleasure of getting to work on bike or e-bike. There was a lot of excitement around Amsterdam bike riders being allowed to take over the normally cars-only tunnel under the river IJ. A few people went back and forth through the tunnel for the fun of it. I mean, what's more exhilarating than taking back the streets?

Highway congestion was much lower than expected, but local roads were snarled in car traffic, like a throwback to the way things were in the 1970s.

In Amsterdam, an ambulance nearly got trapped in still-standing traffic. Thank goodness for the bike path!

You may also like:
1. What do YOU see in the Green New Deal?
2. Three Ways to Lower Your Car Payment
3. Extreme weather and the migration of drivers' licences