My kinswoman Danielle (I like her too much to think of her as my step-grandniece twice removed), knowing my interest in sustainable transportation, loaned me one of the books she used for the urban design studies which she recently completed.

I took it home and, as often happens with loaned books, spent a few days admiring the cover photo, and the heft of the book. 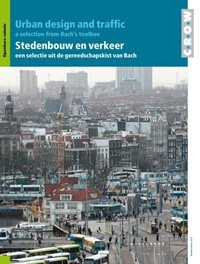 Then one day last week, I actually opened it. It hasn't let me go since. The very first random page I landed on had diagrams of residential neighbourhoods showing the layout of homes and roads, specifically designed so that there was a safe route to school from nearly each home, requiring at most one or two road crossings.

The shocking thing about this was that this concept was an eye-opener to me. Why should it be? Of course residential neighbourhoods should have safe routes for kids to go to the places they visit most often: school, the library, the pool and so on. This makes so much sense.

But in my town on the US east coast, school buses serve children who live more tham two miles away from school; the ones who live closer by are expected to get to school on their own.We have crossing guards (lots of them, one at each intersection) but there are no car-free routes. There are not even bike paths; the town has sharrows, but none on the streets around schools. As a result, many parents drive their kids to school, causing traffic jams and lots of emissions, and depriving their children of the experience of getting themselves to school independently.

The book is packed with gems like that; so far, every time I've opened it I've learned something about how to make a town or city not only sustainable, but pleasant to live in. The trick is to design for people, not for their mode of transportation (whatever that mode may be - but unfortunately, that's overwhelmingly the car).

"Urban Design and Traffic: a selection from Bach's toolbox" is based on the work of Boudewyn Bach, until 2005 a professor at the department of Architecture at the Delft University of Technology. Far from being a dry textbook, this is a mesmerising collection of recipes for elements of sustainable transportation in a city where public spaces are for people first.

There are strategies for traffic calming, how to make traffic safer for vulnerable road users such as pedestrians, cyclists and women, how to achieve accessibility for all by designing for those to are least able to get around, rules of thumb for what conditions make public transport affordable. The book describes many experiments (some of which backfired and were valuable teaching moments). All this provided with diagrams, before and after photos, and bilingual text (in English and Dutch).

At times it seems that half the examples are from Delft. I had no idea my home town (and its inhabitants) had been guinea pigs for a multitude of traffic experiments like the one that has made the medieval town core trivial to traverse on foot, harder on bike and impossible by car, much contributing to the peaceful ambience prized by visitors and residents alike.

Published by CROW, the Dutch technology platform for transport, infrastructure and public space, it is hard to get outside the Netherlands. Which is a pity. So if you are into Smart Streets, Complete Streets, sustainable towns or whatever arrangements are called that help traffic of all speeds and sizes co-exist safely, just contact the publisher. Or find a recent urban studies graduate who is willing to relinquish their copy.

You may also like:
1. Ten Ways to Calm Car Traffic
2. The Netherlands: Bike-Friendly By Law
3. How the Dutch got their Bicycle Paths