This is the day of the 2015 People's Climate March, the day before the COP21 climate talks start in Paris. 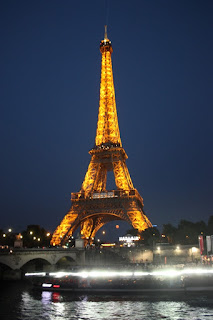 Here is our chance to tell world leaders that we care about our planet's climate, that we need it to remain livable, for us, for our children, for all who come after us, and for all creatures with whom we share this blue marble.

400,000 people walked in last year's Climate March. We stunned the world. In New York, so many people showed up that there was literally no end to the march: the organisers had to cancel the closing ceremonies because there was no time, and no space, for all of us to attend it.

The 2015 People's Climate March can be bigger than that.

As the newsfeed curator at Global Warming Fact of the Day (replicated in my Twitter stream), I have seen the effects of that Climate March. It has brought a change of heart to many people. It has made many come out in favour of climate action. We're not talking environmental activists on the fringe, we're talking about the CEOs of major companies, religious leaders like the Pope, whose recent encyclical, Laudato Sí, emphasizes the moral aspects of climate change. We're talking about the mayors of the world's major cities, who are taking measures to protect their cities.

Sunday, 29 November 2015 is when you and I can show we stand with them, with each other, and with the planet. You don't have to come to Paris: marches will be held all over the world. Please plan to come to one. Bring your children, your parents, your friends. If you have the wherewithal, help organise one.

Here is Ricken Patel's open invitation to join the march.

You may also like:
1. People's Climate March: so big, there was no end to it.
2. How will you travel to the Climate March?
3. How to Spread the Word about Climate Change - Even if You're Not a Climate Scientist