Is the Flying Dutchman a Myth?

Of course the flying Dutchman ship is a myth. But I'm talking here about today's average flying Dutch person.

But that word "average" contains a thousand pitfalls: in a recent column, Tim Harford points out that there is no such person who is the "average" person. In talking about populations, the average tells you something, but is far from the complete picture.

The distrbution is the important thing.

One - rather extreme - example is that of the United States, which is said to be one of the richest countries in the world but has plenty of citizens who go to bed hungry.

Meaning, the "average American" is a myth.

So it comes as no surprise that the "average American eater" is also a myth. A recent study has shown that only 20% of Americans are responsible for 46% of American's food-related emissions. This would be the 20% who eat a lot of beef and dairy. 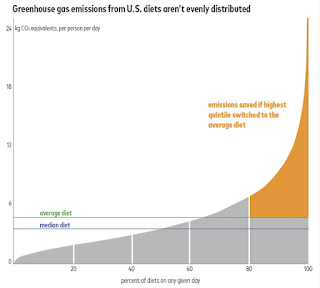 So it is with the average flying Dutchman. If you've ever been in the Netherlands in the dark and dreary winter months you can see why it's nice to escape the rain and the wind. But where the traveling Dutch used to find the sun by driving to Spain or the south of France, now they fly to Thailand or the Caribbean. You can find them in the Grand Canyon, on Bali, going for the summit of Kilimanjaro. No wonder people think of them as the Flying Dutchman.

In truth, it is just 8% of the Dutch population who make 40% of the flights. And yes, they fly mostly for vacations. A government survey shows that 42% of Dutch people don't even fly at all, citing cost, fear of flying, or health reasons (however, not too many forego flying for environmental reasons).

A survey in the UK shows very similar results: 15% of British adults are responsible for 70% of the flights, while 57% had taken no flights abroad in the year preceding the survey.

In fact, that is generally how it is with carbon emissions. Consider total global emissions. It is often said that the poor, who bear the brunt of climate change, are the least responsible for it. Oxfam has made a graphic that shows just to what degree the poor are not responsible: the globally poorest 3.5 billion people (half of us on the planet) cause only 10% of global emissions. 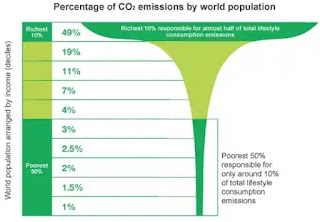 In contrast, the global top 10% cause half the emissions. (And in case you are wondering whether or not you belong in that category: As a rough rule of thumb, if you can afford to buy a car, you're in that top 10%, whether or not you actually own a car).

Now you can see why Kevin Anderson, the British climate scientist, has advocated for tayloring climate policy to that top 10%, the heavy hitters in our emissions. Take them out of the game, and the whole world has more leeway. As Anderson says,

"If that [global] 10 percent of high emitters reduce their carbon footprint, their individual carbon footprint, to the level of the average European citizen, that would be equivalent of a one-third cut in global emissions, even if the other 90 percent did nothing."

I would take it one step further: the global 10% lead lives that are aspirational to the rest of humanity. Right now, everybody wants a large house, a large car, and far-flung vacations, and if possible several cars parked at several houses all far away from each other. That is the perceived style of desire.

It does not have to be that way. Look how electric Teslas have become a status symbol, and how it has awakened in everyone a desire to go electric with their next car. The lifestyle guru Marie Kondo, who advocates for a near-minimalist lifestyle, has been very popular with the rich and the famous.

And with the advent of "flygskam", or the shame of flying, people will find a way to make vacation destinations closer to home more glorious. Already, following Greta Thunberg, there has been a rise, not only in the number of train rides, but also in the number of social media posts where people show off their train travel. Indeed, there as been a resurgence in overnight trains signaling, finally, a turn away from membership in the "jet set" being a symbol for wealth and desirability. I mean, right now an overnight train is the most expensive way to get somewhere.

Who knows, maybe sailing vacations will become popular with the Dutch, and the legend of that flying Dutchman will enjoy a renaissance.

I can't wait to see what other low-carbon status symbols will emerge.

You may also like:
1. How Will You Travel for Thanksgiving?
2. Three Ways to Lower Your Car Payment
3. #SchoolStrike4Climate: Why I've been quietly crying