Just how bad is diesel exhaust?

It's no secret that this blog is a proponent of cars fueled by clean diesel, so much so that since this spring a clean-diesel car occupies our driveway (I believe in transparency and want to put this disclosure right up front). So when, earlier this month, the World Health Organisation (WHO) reclassified diesel exhaust as a carcinogen (from a "probable carcinogen) I needed to find out what than means, exactly. After all, my children occupy that driveway too. And speaking of children, the nation's fleet of iconic yellow school buses runs largely on diesel. So moms like me need to educate ourselves on the risks of diesel fumes.

Diesel exhaust, like all engine exhaust, contains a number of volatile chemicals that aren't good for you. But the part that leads to a risk of lung cancer is the particulate matter (PM) emitted by diesel engines, known to most of us as soot: that black cloud that until recently is characteristic of 18-wheelers and tractors, especially at a cold start.

Of the particulate matter, the highest risk is posed by the smallest particles that can get deep into your lungs and cause damage to the tissue. In this context, "small" means 2.5 micrometers; that's 1/10,000 of an inch, or 1/20 of the width of a human hair. In pollution parlance, all particulate matter that is 2.5 microns or smaller is grouped under the heading PM2.5, which is part of the PM10 pollution of all particulates up to 10 microns.

To get a sense of perspective, let's start by stepping way back and asking about the overall sources of PM2.5 pollution. For me, there were a few surprises in the rather comprehensive data on PM2.5 collected by the EPA (I will highlight nationwide numbers but they also have data by state and county). The data is from 2008, after clean diesel with an ultra-low sulfur content became mandatory in the US. 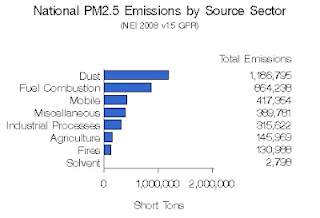 Nationwide in 2008, the total PM2.5 emissions was 3,454,000 tons. (These staggering numbers are only livable - just - because the earth's atmosphere is large: however, let us never forget that it is not infinite). Nearly a third of those PM2.5 emissions is from dust - mostly from unpaved roads! The fuel combustion heading includes electricity generation, and residential heating with wood. Of the 417,354 tons of PM2.5 from mobile sources, 75% is from non-road use, including commercial marine vessels and air planes, which so far has evaded emissions regulations, diesel train locomotives, etc.

On-road emissions (107,384 tons) account for 3% of the total PM2.5 emissions from all sources; 58% of that comes from diesel trucks, and 37% from gasoline-fueled cars. Those diesel trucks really do a job! The Union of Concerned Scientists remark that as of 2008 in California, "Diesel trucks number about 600,000 but produce more than double the amount of PM and NOx from all of California's 20 million passenger cars and trucks." 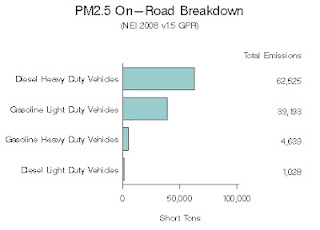 There are two notes to this observation: firstly, this is after ULSD "clean" diesel became mandatory in the US in 2007, so PM emissions from those diesel trucks used to be much worse. Secondly, while gasoline-powered cars don't emit soot, they do contribute to PM2.5, from the oxidation and accretion of their organic emissions, also known as secondary organic aerosols (SOA). Indeed, a recent study has shown that most of the SOA in Los Angeles can be attributed to gasoline powered cars rather than diesel trucks.

Diesel powered passenger cars hardly feature in the mix, mostly because there just aren't that many of them in 2008. However, their numbers are projected to increase to 12% of new light-duty vehicles by 2018 globally. In Europe they already account for half of new passenger car sales, because their high fuel efficiency and tax advantages that offset the higher purchase price.

But this does not mean that we will be enveloped in a thick shroud of smog and PM pollution, in the manner of London anno 1880, or Pittsburgh anno 1940, or Beijing anno 2012.

While most of the diesel trucks that contributed to the PM2.5 count in 2008 had no scrubbers, catalytic converters and soot traps to speak of (all of which would be quite ineffective with the dirtier diesel prevalent before 2007), new diesel trucks and passenger cars fall under strict emission regulations in the developed world, and none stricter than those set by the US EPA.

Never mind the exact engineering specifications for particular models: the cumulative bottom line is the EPA limit for PM2.5 of 15 µg/m3 (micrograms per 1000 liters), with occasional outliers up to 35 µg/m3 allowed for no more than 24 consecutive hours. And there is a proposal in the works for lowering the limit further, to 12-13 µg/m3.For comparison, in Europe the PM2.5 limit is 25 µg/m3.

In Beijing, the PM2.5 count goes "beyond index", i.e. exceeds 500 µg/m3, more often than one would like: it's because China still uses diesel with the higher sulfur content, which is cheaper to produce, and its burgeoning industry is powered largely by coal.

While PM2.5 emissions from diesel cars and trucks make up a small portion of total PM2.5 pollution, you still don't want to spend too much time too close to their sources. For instance, when standing in line to board the school bus, try to avoid its exhaust plume.

Because unfortunately, most school districts cannot afford to switch overnight to the new, much cleaner, school buses; in fact many can't afford even the installation of soot filters on their older diesel powered buses. But states and municipals do have guidelines in place, that call for such common sense practices as minimising idling, in particular after a cold start when PM emissions are highest.

As older and sootier vehicles are phased out of the nation's fleet, the PM emissions from road traffic should improve even as more clean-diesel vehicles come online - and because those are up to 40% more efficient than gasoline engines of comparable power, they will help keep CO2 emissions lower as well. Remember that PM from road traffic is a small part of overall PM pollution.

Even so, it's good common sense to avoid standing in the exhaust cloud of any diesel vehicle, or any vehicle at all - tell your children not to hang out around idling school buses. Give the right example by not idling your car along the curb for more than a minute or so: apart from the reduced emissions, turning off the engine is the ultimate fuel (=money) saver.