The Mazda 5 offers a roomy ride for those families who need more than five seats but don't want or need something as large as a minivan. This compact MPV has recently been updated with sweeping lines on the sides, spanning a practical sliding door. Seating six (in the US), access to the third row is through an opening between the second-row seats.

The Mazda USA website tactfully refers to that opening as "elbow room", but perhaps Mazda have simply figured that Americans' expanding girth precludes seating three across the second row. Which is a loss to those American families who do have lanky children (and there are still plenty of us): for that opening in the middle can easily accomodate a seventh seat. 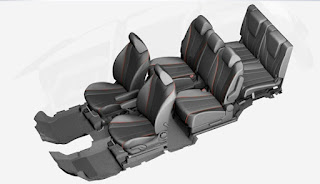 Indeed, the seventh seat is offered in those markets deemed by Mazda to either have slimmer populations and/or people who are used to having less need for personal space (ever been in the Tokyo subway at rush hour? A reference to "sardines" would be a vast understatement). In Japan, where the Mazda 5 is called the Premacy, the configuration is called the "6+One" seat concept: click on the photo to see the re-configuration in action.

Will the seventh seat be a comfortable long-distance place for your biceps-endowed high school quarterback? -No. But for a younger child (or a very, very large teddy bear): sure.

A friend of mine, who is a mom of three (including a cello player and a violin player) tells me that should her youngest child decide to take up the cello also, there is space in the back for an additional cello in the back of her Mazda 5, even with third row up.

As usual, the US offer (choice? what choice?) has the largest engine of them all: a 2.5L, 16-valve job that is reported by its users to get 26 mpg on average. The smart automatic transmission has something called "adaptive shift logic" that gets the same fuel efficiency as a manual version (the auto version does have a higher price tag). Customers in Japan are offered a 2.0L gasoline engine with stop-start technology called i-STOP; its estimated real-life fuel economy is about 30 mpg.

In Europe, the choices are three: 2.0L and 1.8L gasoline engines, and a 1.6L diesel that gets the highest fuel efficiency: 39 mpg in real life, while putting out the highest torque: 199 lb-ft (diesel engines do that).

In the UK, the diesel is £ 1,300 ($ 2,000) more expensive than the 2.0L gasoline version; my guesstimate is that, if sold in the US, it would have about the same price tag as the one with the 2.5L gasoline engine available here now. (No, it would not cost close to $40,000 as suggested by the table below: UK prices include a hefty tax, while the on-the-road price in the US is close to the net price - cars are cheap here).

I know a few moms - and dads - who would jump at the chance to drive a seven-seater that does 39 mpg. Parents: why don't you ask Mazda to sell you the gas sipper version(s) of the Mazda 5 you know and love?