I have been remiss: in my eagerness to find a new car for my own family of four, I have pretty much neglected the needs of families of five or more. I was reminded of this when Kristina from The Greening of Westford asked for suggestions, and I had no ready answer. I will remedy this omission wholesale right now: by covering no fewer than six vehicles that can carry seven people. This one is for you, Kristina!

One way to get around the issue is to simply stick three children on the back seat: this is what they do in Europe. It works because they have baby and child seats that are quite a bit narrower than what you can buy here, so yes, you can actually fit three in a row in the back of a VW Golf. Even in the back of a Honda Fit.

But child seats in the US are wider, and it would be hard fitting three of them in a smallish family car. And if you have beefy teens who are getting broad-shouldered from their stints with the weights or with the rowing team, they would have a fit if you saw fit to fit them three across in a Fit.

So the first place I checked was the website of Ford, the company that has been instrumental in family mobility for over a hundred years. They still are: they offer three options for 7-person vehicles, the Explorer, the Flex and the Expedition. Those range from the Large to the Enormous: plenty of space for a larger family, plus a friend or two.

In what is now a near-automatic reflex, I looked abroad, and checked out Ford's website in the UK. That also shows three 7-person cars, but three completely different ones: the Grand C-MAX, the S-MAX and the Galaxy. The effect of jumping between the two websites rather reminded me of the Continental Divide.

In the context of cars, the Continental Divide is represented by the vertical line running down the middle of the table below. For each model, the table shows the fuel efficiency (duly translated into miles per US gallon) for the smallest engine available for that model. Note: the numbers for the Grand C-MAX are real-life MPG as reported by their owners; those for the S-MAX and the Galaxy are "official" MPG which in Europe tend to overstate the fuel efficiency.

Moms! here is proof that you can move your family of five (plus one set of grandparents) and still do up to 35mpg, without paying hybrid prices. Yes you can. Moreover, these cars are designed and built by Ford, an icon of Detroit and of American life for generations. Yes it can.

I think it's time to ask Ford to start selling their best gas sipping people movers on their home base. A vehicle like the Expedition is meant for hauling a large family with all the paraphernalia necessary for survival at the mountain cabin, plus the boat. Not all of us need that kind of brawn.

Unfortunately I can't very well give a driver review since the nearest dealer carrying an S-MAX is across the Atlantic. What shall we say? It's an MPV, albeit smaller than the MPV minivans we're used to seeing on US roads. 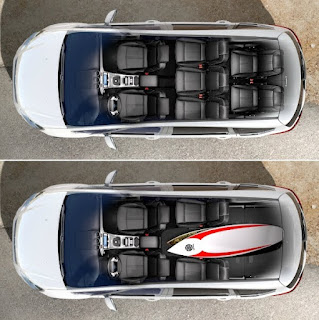 Both the front and rear side doors swivel open; all the back seats can be folded down flat independently, so you can adapt the seating / cargo space to your needs of the moment. This MPV can be configured with all the usual bells and whistles, from leather seating to USB connections. My favourite option is the heated windshield: its heat turns on instantly at the touch of a button, relieving you from having to hack away at the freezing rain that often visits cars in such maritime places as the UK and the Netherlands, usually on Monday mornings before an important meeting.

The Grand C-MAX, classed as a compact MPV, is just four inches longer than a Toyota Matrix, so there isn't that much space behind the third row once you've put that up. But with the third row folded down there is space for a few cellos in the back.

The smaller 5-seat C-MAX is coming to the US (MY 2013), but only in a hybrid version (including a plug-in hybrid). That's nice. But I think I would extend a much warmer welcome to one of Ford's European 7-seat offerings: even without the hybrid technology, those already get up to 35mpg. If you trade in an older Explorer, you could double your fuel efficiency overnight.