It's been quite some time since the fare was a quarter. But wandering the old haunts in Cambridge MA over Thanksgiving, I was pleased to find that the Number 1 bus still plies its route over Massachusetts Avenue, between Dudley Station and Harvard Square. The buses have been updated, and the fare column is now equiped with an RFID reader for the CharlieCard that gets you access to Boston's public transport network. 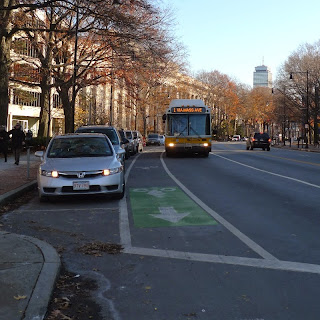 But what is new on Mass Ave is the bike lane that goes both sides along its length. It's still only a lane, marked off with mere paint. But it's there.

You can look at a bird's eye view - OK, it's a google satellite image, so it's marked with the various features, like the bus stop, and the greyed mark designating the road - but you can see what happened: Where there used to be two car lanes each way, going in front of 77 Mass Ave, there are now still two lanes headed toward Harvard Square, but only a single lane headed toward Boston. The space that used to be occupied by the fourth lane has been divvied up between the two bicycle lanes. 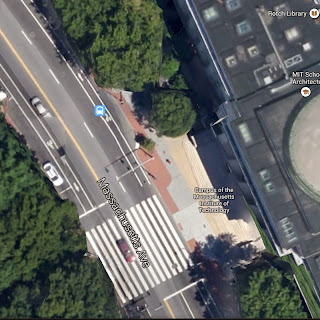 I can't help wondering how much doing it took to put in that change. Certainly bike lanes are now all over Cambridge. And even though they are still only lanes, it's still a welcome change for the better.

You may also like:
1. Ten Ways to Calm Car Traffic
2. How the Dutch got their Bicycle Paths
3. Best of #ReplaceBikeWithCar