It was in Europe that the party first began for the Ford Fiesta, back in the 1970s. Joyous, feisty, and nimble, it became very popular the world over, except perhaps in the USA, where it was pulled from the market in the 1980s, not to return until 2010.

It seems we've missed quite a party. But the good news is that the party, for this car, is far from over.

In Britain, where the Fiesta has been one of the best selling cars for decades now, it is available in a riot of colours (twelve in total), and a large palette of engines as well (currently nine different ones, see table below).

The Ford Fiesta is available in sedan and hatchback versions all over the world (except in India where only the sedan is for sale), but the frontal aspect changes for each location the way fashions and foods have their local flavour. Someone could probably write a dissertation in anthropology on the ways the Fiesta goes dressed around the world. In this post I highlight just the frontal aspect and the engine under the hood; I'm sure there is a lot more to be said about the differences in the Fiesta's interior from one continent to another.

For starters, when I was cruising the ford.co.uk website, CelloDad walked into the room and said, "A new Aston Martin?" You have to forgive him: he's been a fan of Aston Martin cars all his life, and we had just gone to see the latest James Bond flick (Skyfall, the one featuring that embodiment of desire, the DB5, stirring memories of Sean Connery in the title role).

"Not an Aston Martin," I said, "it's a Ford Fiesta." And I made a snide comment about reading glasses.

"But it's got an Aston Martin front," he insisted. I don't argue with CelloDad - at least not on the subject of British cars. We checked out Aston Martin's website - of course he was right: the New Fiesta does sport a grille that is bears an uncanny resemblance to the celebrated Aston Martin grille. 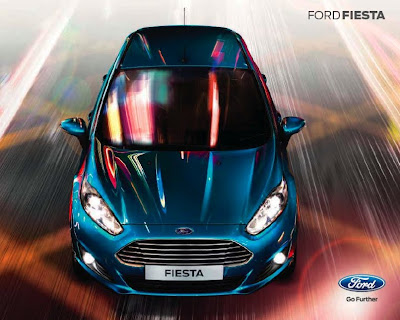 You wonder how that came about. I mean, in Britain the Toyota iQ also acquired that same distinctive grille, but it has been re-badged the Aston Martin Cygnet. Is this an aspirational expression, that Ford drivers really would love to drive the luxury of Aston Martin? Or is it rather a sign of the times: Will the next Bond flick reflect the economic austerity now gripping the country, and feature 007 careening down a scenic mountain road in a Ford Fiesta?

For the US market, where people generally don't feel quite such a deep connection with Aston Martin or with Her Majesty's Secret Service, and where the US Department of Transportation applies different safety and crash-readiness requirements than in Europe, the Ford Fiesta has been designed with a very different front, even though the rest of the body is very similar. 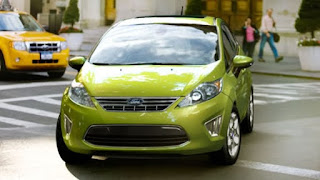 Here the grille has lost the Aston-Martin likeness and been moved down, while the second grille has taken the top spot just under the hood. There is choice of nine body colours, including a metallic lime green but excluding that fiery copper. And the white is called "Oxford White"; that's "Frozen White" in the UK, where perhaps they feel the need to court the custom of graduates from all universities, not just that one.

The US is also one of the few countries in the world where there is no choice in the Fiesta's engine: you can buy it only with the very largest engine in the planetary lineup, the 1.6L Duratec: the one with the lowest fuel efficiency. If they hadn't pulled the 2.0L Duratec from the Fiesta line in 2008, I bet we would have ended up with that one instead. 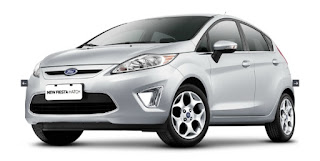 Brazil shares our fate: the Brazilian New Fiesta comes with only one engine, the 1.6L Sigma Flex that can run on either gasoline or alcohol. The front aspect is similar to that of the Fiesta in the US, but the top grille is smaller. Comes in a choice of eight colours, of which four named after US states, like Vermelho Vermont for the maple red, and Azul Califórnia for the sky blue. It never ceases to amaze me to see how desire for status is exploited.

Cross the Pacific, and you find only a slight whiff of the Aston Martin grille in the Asian Fiestas. In the Indian Fiesta sedan the bottom grille has become quite tall; the car is offered with a choice of the 1.5P (for petrol) that was previously available in the UK, or a 1.5D (for diesel) engine, the latter with more power than the 1.5L Duratorq for sale in the UK. Here, my guess is that it is marketed to a more mature segment of the demographic, for the seven colour choices are rather sedate (Sea Grey, Moondust Silver), the one relatively bright note being the Paprika Red. 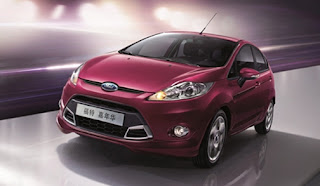 If you want really colourful riot, make sure to turn on sound on your browsing device before checking out the site for the Fiesta in China: it appears that that is where the beating heart of this party is right now.

From what I can tell (I don't read Chinese and had to ask a friend for help with deciphering the website) there are only two choices for colour, but one of them is that Hot Magenta. In places like Shanghai, Guangzhou and Chongqing, the Fiesta appears to be aimed at the newly upwardly mobile young crowd who are attracted by the sweepstakes for an iPad, and don't mind going in for the three-year financing. Perhaps the days that the Chinese do their purchases with a roll of banknotes are passing.

The Chinese Fiesta comes with a choice of a 1.3L and a 1.5L gasoline engine. China's diesel fuel has far too high a sulphur content to run the highly efficient turbocharged "clean" diesel engines that are so popular in Europe.

Personally, that diesel engine is where my choice would lie. If you look at the Fiesta prices in the UK, you find that the Fiesta Titanium hatchback with a 1.6L gasoline engine is about the same price as one with the 1.6L Duratorq diesel engine, but the latter gets about 58% better fuel efficiency. It has 21% less power than the gasoline engine - but 79% more torque for a zippy drive (sans cello). A winning combination to a lot of people, even if it came without the Aston Martin grille.

Fiesta around the world.
Pricing for Titanium 5-door hatch