Christmas Outside the Box

Our extended family have known for years not to send us anything for Christmas - in this we're ahead of Greg Hanscom, who recently wrote an article called "Married father of two seeks Best Christmas Ever. No presents allowed." That piece has become the cornerstone of Grist's December theme, Shift the Gift: de-materialising the holidays.

This is seriously Outside-the-Box stuff. After all, Grist endorses it. Truthfully, I rather doubt Shift the Gift will become a meme overnight: we all suffer the dread of being labeled a Grinch. But while I may be well outside the box on this, I don't think I'm out in left field.

Who actually enjoys the mercilessly merry "holiday music" piped into all the stores, now almost before the Halloween stuff has been cleared away and right up to Christmas eve? The constant assault of commercials? Am I alone in finding Black Friday and the whole run-up to Christmas intensely distasteful? I don't think so. In a survey by the Center for a New American Dream, nearly 9 in 10 Americans say they believe holidays should be more about family and caring for others, not gifts.

All the advertising: pushing, hounding, guilt-tripping, bribing with sales, an immense and persistent effort to make you buy Stuff! Things that your recipient may or may not appreciate. Indeed, a 2008 study for eBay found that 83 percent of people received unwanted items for the holidays, and nearly half (46 percent) re-sold or re-gifted the item.

For the 2012 season, Americans are expected to spend $586 billion on holiday gifts. There must be better ways to use your credit card. It's the more appalling because all that stuff took energy to make, and every item carries its carbon footprint. That's an insane amount of carbon emissions to put on your tab to avoid being labeled a Grinch. We don't know how much of the $586 billion is spent on unwanted gifts, but let's put that in perspective.

At the start of the UN climate conference in Doha, Qatar, where so-called world leaders have spent two weeks not agreeing on how to reduce global carbon emissions, one of the early stumbling blocks was a long-standing request from developing countries for $100bn per year in climate finance, that developed countries are reluctant to provide.

$100bn sounds like a lot, but now it transpires that's only about one sixth of the $586 billion spent on holiday gifts in the U.S. alone. Who knows how much money is expended by the rest of the developed world.

It seems to me we could re-direct our money towards more satisfying goals, and at the same time slash our carbon footprint: So count me out of the collective insanity that passes for Christmas cheer.

Our every shopping decision has a climate impact, so let's shop like our children's and grandchildren's future depends on it, that is, let's not shop very much.

This Christmas we're taking it one step further (in this Mr. Hanscom has been way ahead of us): my family of four will do a novel experiment, in which we agree not to buy gifts for each other individually. We've discussed this with our children - several times, gently spelling it out, to make sure they realise what they're getting into - and I am immensely proud to say that they have graciously consented to this plan. Because it means that they realise they have everything they need. 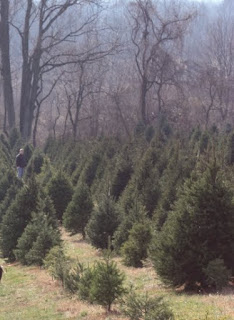 My family will still celebrate Christmas; like all families, we have our traditions. We have brought home a tree from a local farm, and brought out our lights and our collection of ornaments, many home-made, each with its own story. A friend will organise, as she does every year, a solstice walk in the woods, where we leave treats of nuts and dried fruit for the birds. We are now starting to plan a festive meal, which we will cook and bake together. The Christmas cake that we made in the traditional English style has been quietly imbibing its spirits for nearly two weeks already.

While we have agreed to have no individual gifts, there will still be gifts-to-share under our tree: a board game, tickets to a show, other things we will enjoy together. And of course, CelloDad will fill a collection of Christmas crackers with some delectable sweet treats.

In fact, throughout the week between Christmas and New Year, I lift the draconian sugar quota that I impose on our house the rest of the year. And that, actually, is what my children really want for Christmas.

NOTE added 18DEC2012: I stand humbly (and publicly) corrected in a follow-up article by Greg Hanscom, in which he points out that while 83% of people received an unwanted gift, it does not follow that 83% of gifts are unwanted. So, contrary to what is implied by CSR Wire, a great deal less than $486 billion of gifts are unwanted. This post has been updated to reflect this.