Remember The Italian Job? The heist movie in which the booty was so large they needed three getaway cars to carry it all away? Of course, the gold might have fitted in one car if it had been larger. As it was, three Morris Minis made the getaway in one of the most exhilirating chase sequences in cinema: through the narrow streets of Turin, over staircases, and even through a segment of underground sewer.

To tell the truth: even a 1969 Mini couldn't fit in a Turn sewer, so that part of the chase was filmed in Coventry (UK).

Those 1969 Mini Coopers had the same sweet design as the original Morris Mini-Minor launched in 1959 by BMC, the British Motor Corporation. The latter was a bare-bones kind of car. Its instrument panel had a speedometer, gasoline and oil gauges, temperature gauge, warning lights for ignition and main beam. That's it. It cost £ 497. The Deluxe model had a clock.

Ten years later, the 1969 Mini Cooper came with a 1.3L engine (up from 848 cc). Its top speed was just shy of 100 mph, but you don't need that when you're bypassing snarled traffic in Turin, Italy.

The American remake of the Italian Job (2003) featured three Mini Cooper S, made by Rover. It's questionable that the 2003 Mini Cooper would have fit in that Coventry sewer: it's a lot bigger than the 1969 Mini Cooper. Instead, the movie makers opted for sending them down a Los Angeles subway tunnel.

The 2012 Bollywood remake, Players, features the suave Abhishek Bachchan and - you guessed it - three Mini Coopers (now under BMW). The original 1969 movie is still the best by far, but the Indian remake has a twist on the Minis that, like everything Bollywood, is way over the top.

Here's what's way over the top: one of the Cooper's current brethren.

One day this summer, CelloPlayer and CelloDad came storming in, back from a bike ride, wind-blown and wide-eyed. They looked like they had been chased by a monster.

"A Monster Mini! You won't believe it!"

It took a while to calm them down, but eventually it transpired that they had sighted a Mini that was so improbably large that it qualified for the "monster" classification. A bit of research pointed to the Countryman, Mini's bid for the SUV market. As the Cygnet is the ugly duckling at Aston Martin, so the Countryman is the cuckoo in the Mini nest: it is 35% longer than the original Morris Mini-Minor, 43% wider and 16% taller. It is monstrous.

This thing would have got hopelessly stuck in a city sewer. 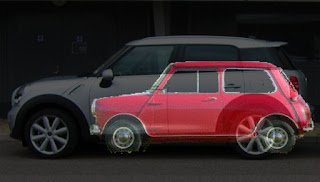 I can see how it caused a cognitive disconnect to see the Mini logo on something that large, like seeing a tricycle the size of a pickup truck. The Countryman is not large as SUVs go, but among the Dutch traffic it must have stuck out like a sore thumb. At over 4 meters length (161.7" = 4.11m) and with an SUV-like height (61.5" = 1.56m) it's imposing enough. There's not much left of the adorable from the Mini-Minor. And Countryman is so big and heavy that even with its modern engine it still manages to have worse fuel efficiency than its dainty forebears from the 1960s.

Guess what? If you must drive an SUV, drive a real SUV. Don't drive something that's supposed to be very large, made by a company that got its fame by making diminutive cars. Even its name is small. Its logo looks wrong on a monster.

The sad thing is, it doesn't stop there. 2013 will see the launch of the Mini Paceman, perhaps so named after the pair of gorillas that have been vigorously pacing its roof all night (after they were done doing the Range Rover Evoque). The Paceman is basically a Countryman of which the roof has been mercilessly squashed down. Needless to say, the unfortunates on the back seat will have a side window half the size of those on a Mini-Minor. Is that progress?

Mini, then and now