Is Energy from Natural Gas Cleaner than from Coal?

Is it good news? The US is transitioning, albeit slowly, from dirty coal-burning power plants to electricity generators run on natural gas. Natural gas contains no toxic mercury, and does not generate coal ash and other nasty waste products. The waste product from burning natural gas is carbon dioxide and water.

Carbon dioxide is a greenhouse gas, but the nice thing about natural gas is that it generates electricity with a much smaller carbon footprint than coal.

Let's take a closer look at how much CO2 emissions are associated with generating one kiloWatt-hour (kWh) of energy. For coal, the emissions amount to 0.963 kg CO2 / kWh, while for gas it is 0.569 kg CO2 / kWh. So natural gas can generate each unit of energy for 40% less carbon emissions than coal. This is why natural gas is generally hailed as a cleaner alternative to coal.

But recently large leaks have been reported: at some natural-gas fields in Utah, where gas is recovered by fracking, up to 9% of the gas is lost to leaks.*

What's the big deal with nine percent?
Well - wouldn't you be happy with a 9% raise in your salary?

But in the case of electricity generated from fracked natural gas, 9% is a much bigger deal than the bare number would suggest. The reason is that the escaped methane is a much more powerful greenhouse gas than carbon dioxide.

To get a sense for how big of a deal this is, let's first look at the rosy picture where all the natural gas from a well is captured and burned. If you remember highschool chemistry, burning methane goes like this:

That is, for every methane molecule burned, one carbon dioxide molecule and two water molecules escape through the plant's stack into the atmosphere where it contributes to global warming. Burn ten methane molecules, get ten CO2 (plus twenty H2O), and so on. 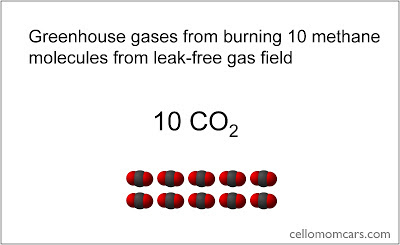 The graphic below shows what goes into the atmosphere when you burn ten molecules of methane produced by a field with a 9% leak rate. I have sized the molecules to indicate the difference in their global warming potential. Methane has a mammoth footprint! 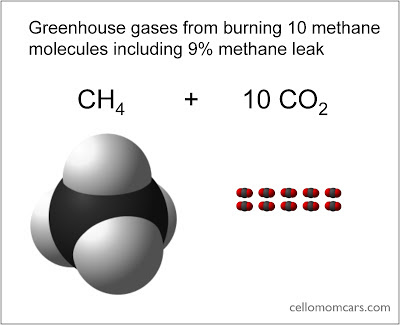 Not only that: Electricity generated from natural gas from a field with 9% leak has a carbon footprint nearly five times that of coal-generated electricity. (That is, if you ignore "fugitive emissions" from coal mines. There is enough natural gas trapped in coal seams that the recovery of coal seam methane is a whole field unto itself).

And we haven't even talked about the water that is also released at the burning of natural gas. While it is very, very difficult to put a number on the global warming power of water, it does trap heat on the earth's surface: just think of how much colder a clear-skies winter night is than one that is overcast with clouds.

Since more and more of US natural gas now comes from hydrofracturing shale soils, this is cause for real worry. Going through this exercise makes me even happier that my home electricity comes from wind and solar energy. And I am now even less inclined to buy a car running on natural gas (although gasoline and diesel come from oil and most oil wells also have - you guessed it - fugitive methane emissions). It puts a whole new light on the practice of flaring, or burning off natural gas that escapes from oil fields: one would like to see that gas captured and used, but flaring is still better than simply letting the methane escape.

Better re-think where we get our electricity from, and how much of it we really, truly need. Preferrably before we go the way of the woolly mammoth. That animal with the large footprint certainly got to experience first-hand what is so succinctly put by Rob Honeycutt in a piece for Skeptical Science on climate change: "In terms of weather, 8 degrees C is only the difference between wearing a T-shirt or a sweater when you go outside. In terms of climate it's a mile of ice".

*The gas industry does not dispute the presence of leaks, but claims the study overestimates the leak rate. The authors offer an argument for why the official leak rates may under-estimate the real rates by up to a factor of two. Pétron et al., J. Geophys. Res. 117, D04304 (2012).