The Dodge Dart is one of those cars that beat the trend and actually got smaller with time. When it was first introduced in 1960, it was a whopping 210 inches (5.35m) long, tail fins and all. It was smaller in the 1970s even as its engine volume reached a now incredible 7.2L. Production ceased in 1976; but the New Dart re-emerged for 2013 as a compact sedan with either a 2.0L engine or the more frugal 1.4L Turbo with Multi-air. The page for the Dodge Dart says, "Alfa Romeo DNA with Dodge Passion and Design". So I went digging into what that means, exactly. Alfa Romeo is the Italian manufacturer of high-reputation sports cars, whose early team included Enzo Ferrari.

Alfa is now part of the Fiat Group, of which Chrysler is a subsidiary. This is how the American Dodge Dart, the European Alfa Romeo Giuletta, and the Fiat Viaggio for the Chinese market all share Fiat's C-Evo platform. The Giulietta is another model that was resurrected, for Alfa Romeo's centennial in 2010. The platform may be the same - but the design is different enough. 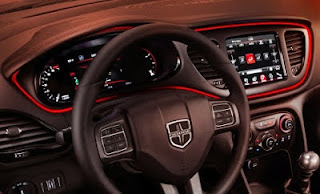 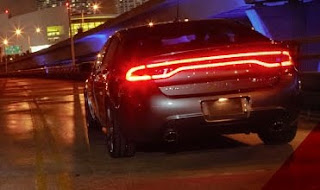 Personally, I think there is enough sound and fury on the road, so I prefer the elegant clean lines of the Giulietta's dashboard over the distracting Sound&Light show on the Dart's dash, where the instrument panel is surrounded by a red rim. That feature is repeated in the tail lights, a string of 152 red LEDs spanning the width of the car. The Giulietta also has LEDs in its tail lights - but not 152. Ugh; I think the LED fling has been going for quite long enough now.

The Dart is wider and longer than the Giulietta: the latter is labeled a "small family car". Really, it actually has five doors, even though only the front door handles are easily visible. My small family (of four) would have no trouble fitting in this handsome car. I would have no trouble taking the wheel. The hatch makes it easy to bring a cello as well. Pity you can't buy Alfa Romeo in the US, we'll have to make do with the Italian ad, featuring Uma Thurman.


"Without heart, we would be mere machines"

(This being the Alfa Romeo Giulietta, of course Shakespeare has to be in the mix; but the quote - "We are such stuff as dreams are made on" - is from The Tempest).

Under the hood, the Dart comes with a 2.0L engine running on premium gasoline (25 / 36 mpg) - but the Aero version has the more frugal 1.4L turbocharged gasoline engine with Multi-air, a technology developed by Fiat in which the timing of the air intake is variable, and controlled in such a way as to boost the power (by 10%) and torque (by 15%) and to significantly reduce emissions of CO2, NOx and particulate matter. This lifts the fuel efficiency of the Dart Aero to a respectable 28 / 40 mpg (cty/hwy).

For the Giulietta, this engine is also available, as well as nine other options, including a 1.4L dual-fuel gasoline/LPG engine, and of course a range of turbodiesels. The best fuel efficiency is delivered by a 1.6L JTDM engine that gets 40 mpg average as reported by Dutch drivers, who tend to have vigorous driving habits. As with other turbodiesels, this one packs a punch in its torque, 235 lb-ft. Its power looks modest, 105HP, but that's still enough to get it up to 115mph, or nearly twice the speed limit on most US interstates. It's also a little less expensive (€ 22,270) to get the Giulietta with this engine than with the 1.4L Multi-air gasoline engine (€ 23,320).

Let's hope the Dart will be available with this turbodiesel engine soon.

You may also like:
1. Review: BMW 1 Series
2. How much horsepower do you need?