Batteries are just like babies: Babies are happy only when the temperature is just so. When it gets cold, we need to bundle them up. They don't like too much heat, either: we're constantly being warned to not leave our babies in the car in the summer.

About leaving things in the car: when it comes to the car battery, we don't really have a choice. I mean, I've never seen anyone unhook their car battery, lovingly put it in a stroller and haul it inside to protect it from extreme weather.

Yet that is what it would take to increase the lifetime of our car batteries. With very few exceptions, batteries as we know them now rely on chemical reactions to store and deliver energy, and those reactions, as well as the undesirable ones that degrade the electrodes or the eletrolyte, are highly temperature dependent. Whether based on lead-acid, nickel-cadmium, or lithium ion technology, rechargeable batteries do best around the same temperature that's comfortable for humans: right around 70F (about 21C).

I would have loved to own an EV, especially since I've switched our electricity provider to one that delivers energy from renewable sources. Our EV would have been greener than Kermit the Frog.

What stopped me in my tracks is this graphic from battery manufacturer Discover Energy Corp., which neatly summarises the argument from an article in Technology Review. One should take the numbers with a grain of salt, but the overall trends are striking. 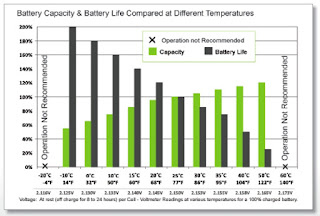 The green bars show capacity, or how much energy you can get out of a battery after it's charged, as a function of temperature. Cold weather is not kind to batteries, as it makes the chemical reactions slow down, and with a good freeze you can lose a large fraction of the battery's capacity (compared to its capacity at 25C (77F) ).

What we are learning very quickly now, and especially if we are owners of electric vehicles, is that high temperatures are even less kind to batteries. While the energy capacity increases with temperature, the lifetime of the battery decreases. Rather precipitously. As in, by 50% for every 8-10C the temperature rises above 20C. If you keep a battery at a constant 50C (122F), its lifetime would be cut by a factor of 10.

What does this mean for your EV?

One thing it says loud and clear is that EVs love places like the Pacific coast. Don't we all? Temperatures are pleasant year round. You don't get scorched, you don't get your backside frozen off. Batteries like that too.

Hybrid and EV owners who live in colder places will tell you that they get less fuel economy out of their cars in winter than they do in the summer: that's the effect of capacity decreasing as the temperature goes down.

And now several owners of Nissan Leafs in Phoenix, AZ, are finding that the searing temperatures of Arizona summers have done a number on the lifetime of their batteries, consigning their EVs to the dreaded Turtle Mode.

Not only did it get hot in Phoenix this summer, a car in the sun is the best demonstration of the greenhouse effect: Light from the sun comes in through the windows and gets absorbed in the upholstery and the dashboard - which is often a dark colour so you don't have to squint through its reflection to see the road ahead.

Dark things warm up faster when put in the sun than light-coloured things (ask anyone with black hair). It's true that dark things also radiate away the heat better than light-coloured things (wood stoves tend to be painted black). But that radiated heat, being deep in the infra-red, doesn't escape through the car window: this is the greenhouse effect.

Here is what happens when you park a car on a sunny day when it's 26.5C outside.

This video doesn't mention what colour the dashboard is. It almost doesn't matter: the astonishing thing is that right above the dashboard the temperature shoots up to 83C (181F) - within 45 minutes! Just google "baking cookies on a car dashboard"; I was amazed to see how many people know about this effect. (By the way, don't try this cute trick in a new car: your cookies would end up laced with new car smell, which is toxins outgassing from your car's interior).

The video says that the rest of the car's interior (measured at a seat) heated up to 47.3C (117F) in about the same time. That means that the difference with the outside temperature was 21C (38F). It might take a bit more time for the heat to reach the engine and the battery tucked away in the nether regions of the car, but eventually that will warm up also.

On July 3, 2012, the temperature in Phoenix, AZ went up to 118F (48C). That's already pretty close to the upper end of a battery's operation range. If you're in the habit of parking your car in the sun for long periods of time, it would be enough to push it over the edge.

I suppose if you live in a place where summers are hot, you could park your EV in an air-conditioned garage - but that sort of defeats the purpose, wouldn't it?

Perhaps it's time to face the fact that EV technology is a place-specific solution, the way you can't expect to grow banana trees in the field in Quebec, and a snowboard would be kind of useless in Louisiana.

If you are considering buying an EV, you might check the climate maps to see if your region is EV-friendly. The USDA Hardiness Zones map for growing plants is a good indication of minimum winter temperatures. My guess is that things might turn grim for your EV in Zones 1-4, but that it could be fine (with care) in Zone 5, the same zone in which you would wrap your prize roses in burlap for the winter. Zones 6 and up are fine.

This graphic of mean maximum temperature in July comes from Climate Source. Areas indicated in red are probably not too healthy for an EV. Depending on how conservative you are (after all, an EV battery costs $10,000 to replace), you might want to avoid the orange areas as well. Phoenix lies in that deep-red area in the south of Arizona.

These maps are good for the big picture of climate in the US. You'd do well to get the scoop on your local neighbourhood which might have its own microclimate - as an EV is not designed to wander way off home base, anyway.

Caring for an EV battery:

If you are determined to own an EV even in a non-ideal climate (I get that: I think EVs are marvellous things), and you don't want to wait until next-generation batteries are invented that don't rely on chemistry, there are several things you can do to mitigate the effects of your local climate and to extend battery life. And as with humans, it's easier to deal with the cold than with the heat.

If you live in a cold climate, you might want to keep your EV in your garage at night - that's where the charger is likely to be, anyway. When you go out in the winter, try to park it out of the wind, which would cool it down very fast (that's why it's called the "wind chill"). An underground garage is ideal, the deeper the better. 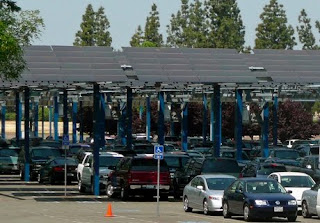 On the other hand, if you live in a hot climate, keep your EV out of the sun as much as possible. Park it in the shade, catching as much of a breeze as possible if there is one. Find an underground garage, which is always cool in sumer, or else a multi-story parking garage (the more concrete on it the better) between some high-rise buildings. But an even better place to park is on a lot covered with solar cells that can charge your EV while you go about your business.

At the risk of adding to your range anxiety, I should also point out that frequent short trips in your EV, with charging in between, gives a longer battery lifetime than longer trips where you (nearly) deplete the battery before re-charging. Any Toyota dealer will tell you that they have yet to replace a Prius battery while under the 10-year warranty, anywhere in the US. This is because in a hybrid, the battery never gets depleted as much as in an EV before the gasoline engine kicks in and re-charges it. And it turns out the number of charge-discharge cycles that make up a battery's useful lifetime decreases with the depth of discharge: that is not to the advantage of the EV.

Finally, try to avoid the fast-recharge mode. It's convenient but tends to degrade either the electrodes or the electrolyte in the battery, leading to decreased lifetime. A patient, overnight charging is best.

In short, treat your EV's battery (and all your rechargeables) - almost - like a baby.